Welcome to the season of lists, that time of endless to-dos before gift-giving and hosting family feasts. But I have another list in mind as we approach the holidays in Davis.

In this case, I’m thinking of my favorite memories from 2019. I’ve got plenty of options to consider, including my one-on-one conversation with William Shatner at the Mondavi Center that I wrote about previously. But overall, it’s been a wonderful 2019, full of learning, laughs and lots of successes for UC Davis. 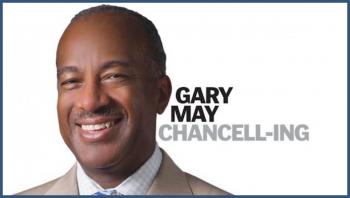 I’m once again thankful to the Davis community for making the May family always feel so welcome. Here are some moments that make me smile as I look back on 2019:

The celebrated actor LeVar Burton brought many of us to tears in the TV mini-series “Roots.” He captivated our imaginations on “Star Trek: The Next Generation” and introduced children to the great stories of our times on “Reading Rainbow.”

What a thrill it was for Burton to visit the Mondavi Center as part of the Chancellor’s Colloquium series. For me, it was a highlight of the year to hear this master actor and storyteller not only talk about his famous roles, but of the importance of equity and representation in media. I’m keeping my fingers crossed that we can bring him back to campus.

The game didn’t look so good at first. Our women’s basketball team was down by 17 points in the third quarter of the Big West Conference Championship Tournament in March. But our Aggies prevailed, beating Hawaii and earning its second trip to the NCAA Tournament.

And yes, we celebrated. I had the honor of climbing a ladder and cutting one of the basketball nets to commemorate this great victory. Then, I helped present medals to all the players. We are the champions, indeed.

Speaking of scissors, 2019 was a great year for ribbon-cuttings and groundbreakings around UC Davis. In March, I was equipped with a pair of giant scissors to cut the ribbon on our improved location of The Pantry, an on-campus food bank for the UC Davis community. In October, I had giant scissors again for the ribbon-cutting ceremony at Aggie Square’s launch headquarters in Sacramento.

I also became well-familiarized with gold shovels. Those were used in groundbreaking ceremonies for The Green at West Village, a campus apartment project with room for up to 3,300 students, and the Teaching and Learning Complex. This project will not only provide classroom space and study areas, but also feature technologies that will help transform some of the ways we teach.

Marvel-ous day at the movies

I made a promise to students of a “Materials Marvels” course when I visited the class earlier in February. That is, I would take the top-performing students in the class to a movie. I made good on my word in May and treated five students to a screening of “Avengers: Endgame.” I always enjoy sharing my science-fiction fandom with students and offering them my support.

I’m hopeful these students will also be in attendance when Christopher Markus and Stephen McFeely participate in the Chancellor’s Colloquium on May 18. These two UC Davis alums were the writers behind “Avengers: Endgame” and other movies in the Marvel Cinematic Universe. In case anyone’s keeping score at home, “Avengers: Endgame” has grossed more than $2.8 billion worldwide and ranks among the highest grossing films of all time.

Pretty great for a couple of guys who met as graduate students at UC Davis.

The sight was rather incredible in the “City by the Bay.” For one night in August, San Francisco City Hall was illuminated in the UC Davis colors of blue and gold. I was there to lead a conversation with Mayor London Breed, a UC Davis alum (B.A., political science, class of 1997), as part of our Aggie Leadership Series. More than 100 other alumni and university friends were there as well.

I was awed by the depths of Mayor Breed’s Aggie pride, to the point that she had the exterior of City Hall lit in blue and gold. Our Aggies are truly everywhere — from the mayor’s office to the Marvel universe — and working hard to make great change.

Partnering with the City of Davis and Yolo County

As I said last month, I’m pleased with the progress that the university, City of Davis, and Yolo County have made over the last year. We held a joint public meeting in October to discuss housing projects, transportation and other issues we’re addressing together.

We all agree that the student experience on campus, in town, and in the broader community is a priority. We are committed to working together to solve shared problems and tackle real needs.

As we say goodbye to 2019, happy holidays to our Davis community and Aggies around the world, from my family to yours!