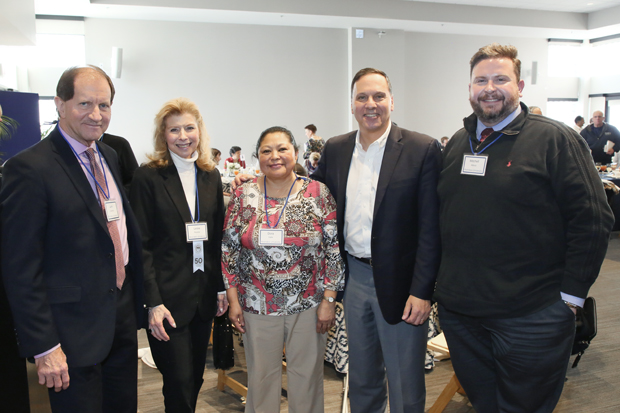 “Without the staff, we could not accomplish any of the major goals that we see in the future at Brandeis. Be it the academic program, be it the physical infrastructure improvements we envision, be it the further development of our faculty and staff,” Brandeis President Ron Liebowitz said. “You are central to all that we do and to the future success of Brandeis.”

The Lou Ennis Staff Award, which recognizes an individual who demonstrates loyalty and dedication to the university and its mission by surpassing the requirements of the job, was presented to Assistant Director of Institutional Research Mitchell Allbury. He was introduced by Vice President for Planning and Institutional Research Dan Feldman, who highlighted Allbury’s recent dedication to the implementation of the university’s new human resources software system Workday.

“Mitchell lives by the ethical principle of treating people the way he would want to be treated. I’ve been told again and again how helpful and generous he’s been with his time, doing whatever it takes to help people through whatever issues they’ve reached out to him about, whether in his role as the expert on academic appointment data in Workday, or any of the myriad other things he’s involved with in his capacity as Assistant Director of Institutional Research,” he said. “And I’ve also seen that he brings his sense of humor to the work, which can be a real help in easing the stress everyone feels from time to time.”

The Louis and Helen Zirkel Staff Award is given to a member of the support staff who has demonstrated consistent effort to improve the service and the operation of their department and of the university. It was presented to Dora Valle of facilities services who was introduced by custodial supervisor Jenny Benavides.

“I have known Dora to be driven, self-motivated and a strong communicator, not only with other team members but with the community at large. She is very attentive to any and all requests received, just ask the occupants of Lown and the surrounding buildings of north academic,” Benavides said. “When you come into her area you will not only be greeted with a clean building, but with a big smile from Dora.”

“Leslie is the quintessential example of the engine quietly driving a department forward. In addition to her own hands-on work, wielding brushes and glue and micro spatulas and a large green guillotine with consummate skill, she has trained countless staff members and students in the handling of fragile paper, rare books, and manuscript collections,” Shoemaker said. “Leslie has been a wonderful mentor to many; several conservators with successful careers in the field owe their start to Leslie’s training and support.”

Staff with 10, 15, 25, 30, 35 years of service at the university were also honored during the luncheon and presented plaques by senior university administrators.