These Brandeis pollsters have new insights into the American electorate 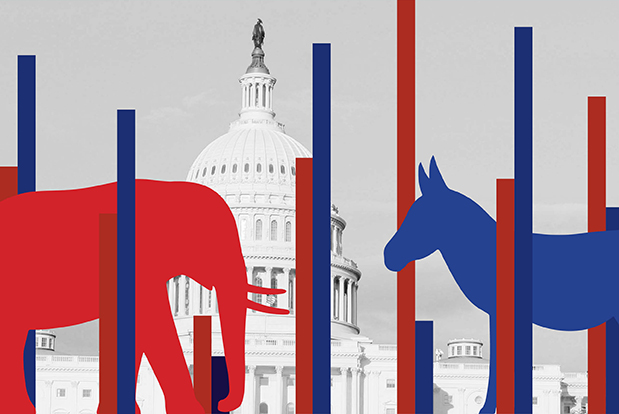 Hyper-partisan might be an accurate way to describe our current politics, but a group of Brandeis students has found that using party labels to dismiss potential reforms on issues like healthcare, gun control and climate change might be short-sighted.

Students conducted this research in “Polling the American Public,” a politics course offered this semester for the first time at Brandeis by professor Amber Spry, an expert in polling, identity politics and political behavior.

The class required each student to develop a research question related to an issue of interest for the American electorate. From there, the class worked collaboratively to combine each research question into a survey, which contained additional demographic questions about age, race, gender, income, religiosity and education level.

Dynata, a polling service, then sent the survey to 700 respondents nationwide after Spry and her students conducted some pilot testing in class.

“At the end of the semester, students were able to conduct analysis using their own, original data,” Spry told BrandeisNOW. “That is a big accomplishment. Most of the students did not have prior experience in quantitative data analysis, but are currently performing at the level of professionals in this field and are now all certified in human subject testing.”

Students presented their findings at a Dec. 4 symposium held in the Shapiro Campus Center.

“My research adds to the growing body of understanding that people of color in America are disproportionately affected by gun policy and are consequently more likely to be wary of guns as it relates to their lived experiences,” said Moen, who is from Ashland, Oregon.

“It’s not as surprising as it is compelling,” Spry added of Moen’s findings. “The rhetoric around gun control is often partisan, and characterized by a liberal-conservative divide. While the research does show that ideological preferences exist, Willa finds that race plays an independent, and significant role.”

Victoria Sanchez ’23 of Nashua, New Hampshire tried to identify whether someone’s education level has any effect on how they perceive the threat of climate change.

“There was one specific instance where we were able to see a relationship between education and climate change, and it’s when we look at those with a college education and those without – but it’s just barely a statistically significant relationship,” Sanchez said. “Because ideology has so much pull on these views, it negates some variables like age.”

Spry said Sanchez’s findings could have a bearing on how policymakers seek to tackle climate change legislation in the future.

“This research is important for thinking about how to influence public attitudes toward climate change,” Spry said. “If education is not really an area that moves attitudes, we have to think about what could be effective.”

Zachary Wilkes ’20 examined how one’s income affects their support for universal healthcare. While the survey showed universal healthcare remains a partisan issue, Wilkes said his research showed that a small sector of people who identity as moderately conservative – specifically those with incomes of $10,000 or less – will support the policy as much those who say they are liberal.

“This matters because healthcare is a big issue in 2020, so it may make sense for liberals to go to these poorer, more conservative communities and advocate for medicare for all,” Wilkes added. “It’s not to say it will work – but this may matter enough that it could move the needle in one county, one state, one election.”

Other research projects centered on welfare spending, religious attitudes toward illegal immigration and marijuana decriminalization, how education level affects one’s view on abortion, and how gender influences the view of female political representatives.

Spry said the class considered how to word and order questions in the survey to get optimal responses. She said the experience of learning how to arrange the survey and decipher its results gave students in-demand skills in data analysis, data programming and survey research.

“They were thinking in very advanced ways about getting the most out of this questionnaire,” Spry said. “Now they have skills that they can relate to a future job – these are skills that are in high demand for people who come out of Brandeis with social science backgrounds.”

“Another thing that makes the class so enjoyable is that we’ve investigated topics that are both in the news and important to the students,” Spry added. “I think it’s important to see what’s compelling about politics through the eyes of young Americans – what issues do they think are important? I think my students’ research shows they’ve got important things to say.”