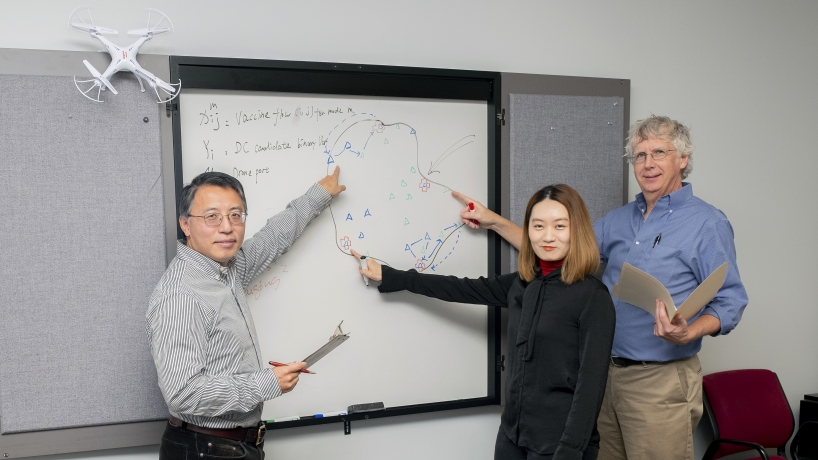 Haitao Li, Deanna Pan and James Campbell playfully point to a map of Vanuatu, a South Pacific island nation that serves as the focus of their research on the feasibility of using drones to deliver vaccines. (Photo by August Jennewein)

A health-care worker slips on loose rocks as she hurries up a steep dirt path. The large cooler she carries has been making her arm ache for the last few hours, but she can’t stop and rest. The vaccines inside the cooler will spoil in two hours, and she’ll barely make it to the village and its children in time.

For doctors and nurses in Vanuatu, a South Pacific island country, difficult trips on foot are frequent. It’s the only way to get vaccines and other health-care supplies to those who need them.

However, a better option may be available soon. UNICEF and the World Health Organization, among other nonprofits, are currently researching whether drones are a viable option for delivering vaccines to remote villages.

The project stretches from Vanuatu to the University of Missouri–St. Louis, where James Campbell, professor of Supply Chain and Analytics, Haitao Li, associate professor of Supply Chain and Analytics, and Deanna Pan, a College of Business Administration PhD candidate, create models and solve equations to investigate how drones can be used to get vaccines to the children in need in the most efficient way possible.

Their efforts are supported through a grant from the Association for Supply Chain Management (ASCM).

“ASCM has a big mission for making a positive impact on society through better supply chain management,” Campbell said. “This is one example. They want to support initiatives that are going to have a positive impact, whether it’s in health care or some other area. We were fortunate to receive three years of funding to look into this problem and come up with a good strategy, a good design to see if drones can improve the cost and ideally get more children vaccinated. The ultimate goal is saving lives.”

The UMSL team plays a specific role in getting drones off the ground. While medical professionals manage the health-care aspects and engineers handle the technical aspects of designing and flying the drones, Campbell, Li and Pan develop data-driven analytical models to optimize drone deliveries and to synchronize a network of drones with health-care providers. They create schedules and flight paths to get drones from one point to another safely and on time.

It’s a complicated system that requires expert insight and planning. Vanuatu is made up of 65 inhabited islands spread across a distance of 1,000 miles, north to south. There are mountainous areas with rough terrain and very few roads, which are often impassable due to flooding.

Vaccines compound the challenge. They have to be kept between 2 and 8 degrees Celsius, or 36 to 46 degrees Fahrenheit, and have a limited life span once they are removed from refrigeration.

Li formulates algorithms to account for these issues and find the most efficient way to deliver vaccines.

“We go to the real world, find a real-life, impactful problem to work on and then we build mathematical models to help people make better data-driven decisions,” he said. “This is a perfect project for us – for our faculty and PhD students. Drones have tons of applications in different areas. In this particular project, we address the bigger question of how this new technology can save children and families in remote areas. This can have a huge impact.”

Currently, the researchers are focusing on Vanuatu children under 1 year old. Only 33 percent of these children have been vaccinated against preventable diseases, which contributes to an increased death rate.

Vanuatu is a good place to start because the country deals with the same issues faced by developing nations throughout the world. Further, the government of Vanuatu is receptive to using drones for vaccine delivery and has been conducting tests with drone startups from Australia and Germany.

Pan joined the team after hearing about the issue two years ago.

“I was in a meeting with Dr. Campbell the first time he brought up the project,” she said. “He mentioned using drones to deliver vaccines in an island country. He asked if there was anyone interested in it, and if there was no one, he was going to do it by himself. Then I told him I wanted it.”

She’s since made this research the focus of her dissertation, pouring time and energy into impacting global health.

It’s making a difference. The project has shown some success, and the concept works so far. However, it’s not yet ready for rollout. There are still issues to be sorted out, such as the decision to land drones or lower vaccines with a tether or parachute.

“We’re trying to bring in some supply chain management techniques that we use in business in developed countries and see if we can apply these in less developed countries with, in our case, vaccines but any sort of medical supplies,” Campbell said. “Preliminarily, there’s great potential here.”

He believes that before online purchases will be flown to doorsteps in 30 minutes, drones will first become common transporting medical equipment in developing countries due to the urgent need for these supplies, the limited transportation infrastructure and fewer government regulations.

Pan agreed, noting that she expects to see drones delivering medicine and defibrillators to rural areas in the United States within the next five years. Li stressed that more research is needed before drone delivery is widely adopted, and this team is anxious to play a role.

“We’re very grateful for this support from ASCM,” Campbell said. “Without that, we would still do the work but not as intensely. We are just doing a small part, but what we’re doing is something no one else does.”