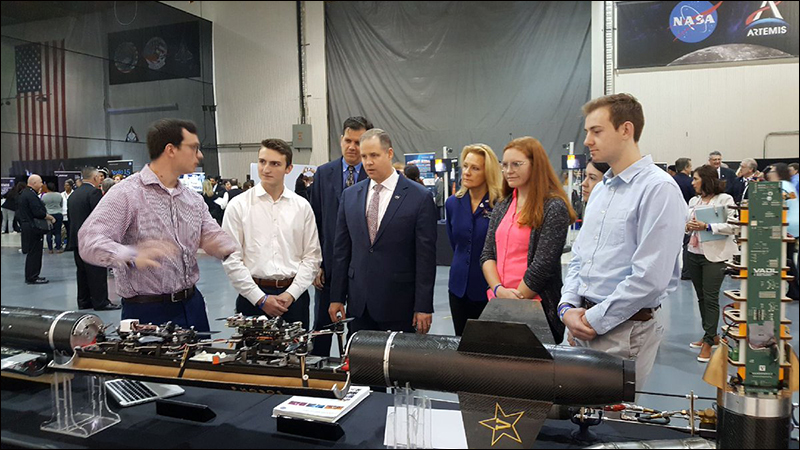 Five mechanical engineering seniors got a rare, up-close look at the core stage for NASA’s Space Launch System rocket that will help power the first Artemis mission to the Moon.

A team from the Vanderbilt Aerospace Design Lab was specially selected by NASA to present their university-based flight projects to the NASA Administrator, NASA officials and national media at Artemis Day, Dec. 9, 2019, at the agency’s Michoud Assembly Facility in New Orleans. VADL is a six-time champion and an eight-time payload award winner of the NASA Student Launch national challenge.

“Following a 36-hour shift that involved a successful subscale rocket launch on Saturday, key team members drove to New Orleans with their rocket and payload to display at the special event on Monday,” said Professor Amrutur Anilkumar, team leader and VADL director. “Such is the determination of our rocket team; it is truly outstanding!”

NASA Administrator James Bridenstine unveiled the Space Launch System liquid-fueled rocket stage that will send the first Artemis mission to space. The core stage, built at Michoud, is the largest NASA has produced since the Apollo Program. 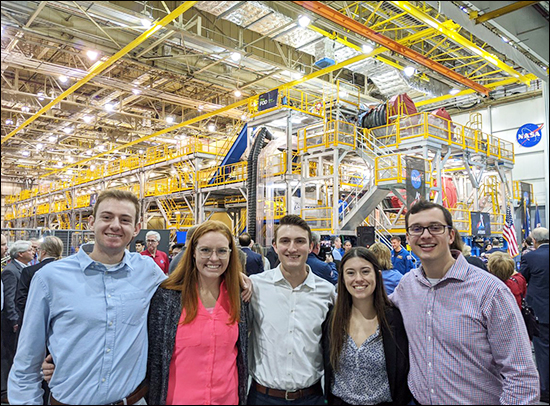 “The NASA Artemis goals are very inspiring to our generation and the NASA student launch challenge has opened doors for us to take on scientific challenges directly applicable to spaceflight,” said vehicle design engineer Abbey Carlson, who will be joining Boeing to work on the SLS following graduation.

Through the Artemis program, a follow-up to the Apollo program, the agency plans to land the first woman and the next man on the Moon by 2024. Artemis I will launch the SLS rocket and an unmanned Orion spacecraft around the Moon to test the systems of both the rocket and the spacecraft. The core stage tests will pave the way for successful Moon missions.

“We are very grateful NASA chose our team to represent the agency’s Student Launch Challenge activities to the NASA officials,” said Alex Barnett, the team leader. “We took the opportunity to showcase our current Artemis exploratory mission designed around an autonomous UAV that does aerial sampling and is very relevant to Moon, Mars and Titan missions.”

“Our focus this year is on repeatable, autonomous, air-based planetary sample collection,” said Jon Powles, who plans to join SpaceX after graduation in May. “Everyone who attended our presentation was impressed and the Vanderbilt colors were flying high.”

The 212-foot-tall core stage, comprised of two liquid propellant tanks and four RS-25 engines, is the powerhouse of the SLS rocket. It will produce more than 2 million pounds of thrust to send Orion, astronauts, and cargo to the Moon. It is the largest, most complex rocket stage NASA has built since the Saturn V stages that powered the Apollo missions to the Moon. SLS and Orion, along with the Gateway in orbit around the Moon, are NASA’s backbone for deep space exploration and the Artemis program. SLS is the only rocket that can send Orion, astronauts, and supplies to the Moon on a single mission.