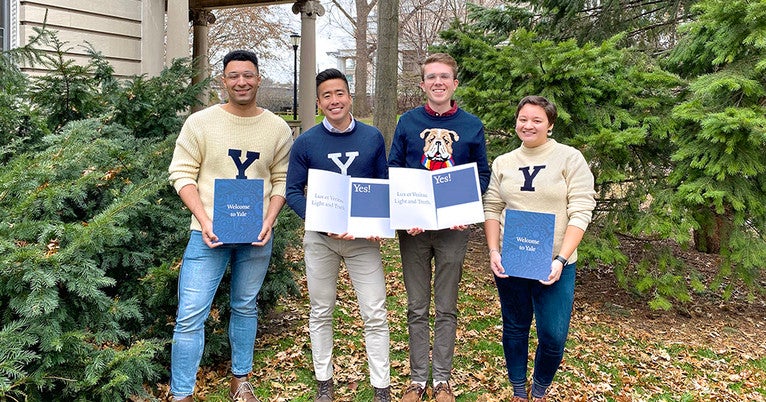 Yale College has offered admission to 796 applicants for the class of 2024 through its early action program, Dean of Undergraduate Admissions and Financial Aid Jeremiah Quinlan said Dec. 16. He also reported that 56% of the 5,777 students who applied through early action were deferred for reconsideration in the spring, 29% were denied admission, and 1% were withdrawn or incomplete.

“The Admissions Committee was very impressed with this year’s early applicant pool across every dimension” Quinlan said. “We are pleased to offer admission to this first group of students in the Class of 2024 and look forward to admitting a much larger group of students through our regular decision process this spring.”

Earlier this month, Yale also offered admission to 87 students through the QuestBridge National College Match program. QuestBridge is a national non-profit organization that connects high-achieving students from lower-income backgrounds with selective colleges and universities. The 87 matching students set a new a record for Yale, far surpassing the previous record of 55 students matching with Yale set last year. It is also the highest number of matching students among all 40 QuestBridge partner schools.

On Dec. 2, these 87 students learned that they had been admitted to the Class of 2024 and qualified for a financial aid award with a $0 parent share. This is Yale’s most generous financial aid award, and includes hospitalization insurance coverage, a $2,000 start-up grant in the first year, and a student share expectation of only $3,700, an amount equal to Yale’s estimate for out-of-pocket costs like books, laundry, and other personal expenses.

Earlier this fall, Yale announced an expansion of its aid policies that will enable more families to qualify for a $0-parent-share award. Beginning next year, parents in families with less than $75,000 in annual income and typical assets will not be required to make any financial contribution towards the cost of their child’s education, including tuition, room and board, books, and personal expenses.

The U.S. Census Bureau reports that $75,000 is above the median household income for families with children ages 6-17. Under the new policy, more than 15 million American families in this range would qualify for a $0 parent share award from Yale — 1.8 million more than under the previous policy.

All students receiving financial aid from Yale — 53% of all undergraduates — are eligible for Yale’s International Summer Award, which provides up to $12,500 for students participating in a Yale-facilitated international experience, and the Domestic Summer Award, which provides $4,000 stipends to support approved unpaid summer positions with nonprofit organizations, government entities, NGOs, research organizations, and arts apprenticeships.

The newly admitted students will be the fourth class to matriculate into 14 residential colleges, as Yale College finalizes its expansion from approximately 5,400 undergraduate students enrolled in the 2016-2017 academic year to more than 6,200 in 2020-2021.

Earlier this fall, Yale announced that the past several classes have all set records for socio-economic diversity. More than 1,000 Yale College students are recipients of Federal Pell Grants for low-income students, including more than 600 in the first-year and sophomore classes. The number of Pell-eligible students in the class is nearly double the number that entered Yale just six years ago. The number of students in the class who will be the first in their families to graduate from college has increased by 75% during the same time. The new First-Generation Low-Income (FGLI) Community Initiative provides students with financial, academic, and social support, and empowers them to pursue leadership opportunities on campus.

“We’re looking forward to working with campus partners and current students to help the newly admitted members of the Class of 2024 get to know Yale. We’ll be welcoming admitted students to campus during Bulldog Days (April 20-22) and always appreciate the time and effort that everyone on campus — from current students to faculty to staff — puts in to making those events a success.”