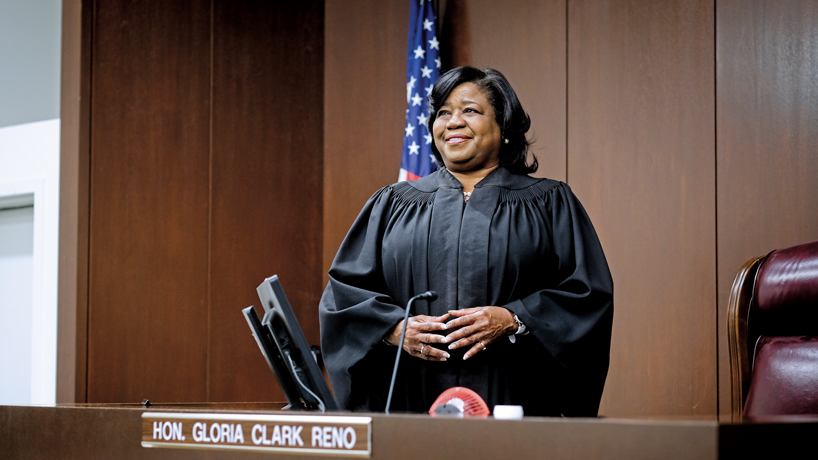 Judge Gloria Clark Reno has been away from the action of the courtroom over the past year since she began presiding over Missouri’s 21st Judicial Circuit, the state’s largest.

But she’s had plenty of other responsibilities to keep her busy.

“Everything comes through this office,” Reno says from her fourth-floor quarters in the St. Louis County Courthouse in Clayton, Missouri. “You get a different viewpoint of the court, and you really understand this is a multimillion-dollar operation. There are a lot of tax dollars that go to operating this court, and it belongs to the citizens of St. Louis County. We want to make sure that we take care of the physical plant and provide excellent service to the public.”

One of her first meetings in the new position last fall was with the risk management staff – to talk about insurance. Reno has since found herself addressing matters of courthouse security and whether the elevators are operating properly. That’s in addition to working with her fellow judges and their dockets.

Reno was honored when they chose her for the two-year appointment – even more so because she is the first African American to ever hold the post.

“Anytime you are the first at anything, I think it’s important,” she says. “For me, it’s important that I do a really good job because you always want to make sure that you leave the door open for someone else to follow.”

Reno knew from a young age she wanted to go into law, though she hadn’t necessarily envisioned becoming a judge.

When she enrolled at UMSL, she majored in English, thinking the language and writing skills she gained would help in her legal career.

After earning her bachelor’s degree in 1973, Reno taught English at Maplewood Richmond Heights High School while her son was young. She later went to law school at Saint Louis University and, after serving a clerkship in St. Louis County, took a position in the St. Louis Public Defender’s Office. It was an ideal training ground for being a litigator.

Reno moved on to try civil cases in private practice. But the perspective she gained as a public defender, seeing the imbalances in the criminal justice system, stayed with her when Gov. Bob Holden appointed her to associate circuit judge in 2002 and when Gov. Jay Nixon named her circuit judge in 2009.

In her position as presiding judge, she’s been part of the team, spearheaded by UMSL Professor of Criminology and Criminal Justice Beth Huebner, working to reduce the St. Louis County jail population as part of the John D. and Catherine T. MacArthur Foundation’s Safety and Justice Challenge.

“Our legal system has many imperfections, but for me, it is still one of the best in the world,” Reno says.

She wants it to work fairly for everyone.

This story was originally published in the fall 2019 issue of UMSL Magazine. If you have a story idea for UMSL Magazine, email magazine@umsl.edu.