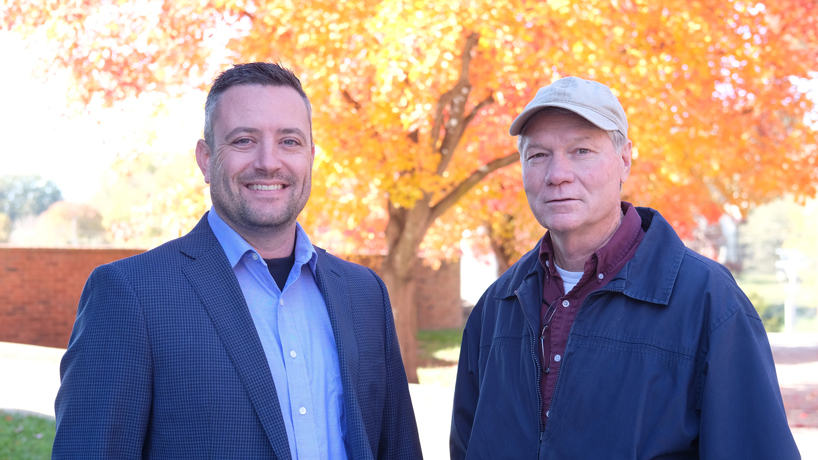 Criminology and Criminal Justice PhD student Tony Michalka, left, has been working with Teaching Professor Tim Maher on a qualitative project exploring changes in the way police officers in the city of St. Louis and St. Louis County engage with the community since the civil unrest that took place in 2014 in Ferguson, Missouri. (Photo by August Jennewein)

Tony Michalka couldn’t have anticipated this moment of cultural change when he chose to enroll at the University of Missouri–St. Louis to pursue a doctorate in criminology and criminal justice.

But he received a pretty big signal that a shift was underway when his duties as a police officer in O’Fallon, Missouri, kept him away from the Department of Criminology and Criminal Justice’s orientation back in August of 2014.

Michalka was a member of the St. Charles County Regional SWAT Team activated to assist St. Louis County police officers with trying to maintain peace in Ferguson, Missouri, amid protests after the shooting death of Michael Brown.

The team was called in several more times amid the civil unrest during his first semester as a doctoral student at UMSL.

He was having those thoughts while also taking a course with Curators’ Distinguished Professor Janet Lauritsen on “Foundations of Criminological Theory.”

“It was an interesting mix between understanding the academic side and the theoretical background of St. Louis history, when it comes to race especially, and also having the practitioner side of law enforcement,” he added.

What happened in Ferguson and the fallout since have provided fertile ground for research and debate over the past five years. One area ripe for investigation has been how it has changed the way police officers engage with their communities.

It was late in the fall of 2014, with crime rates in the area on the rise, that then-St. Louis Metropolitan Police Department Chief Sam Dotson coined the phrase “Ferguson Effect” as a way of explaining those trends. He described trepidation by officers to involve themselves in enforcement situations where they might have concerns of being caught on camera or bringing themselves unwanted public scrutiny.

There’s a debate about what implications that could have on crime. Even if officers continue responding to calls, they might not be as proactive about checking on suspicious activity.

“They said, ‘We’re all being lumped together and criticized. People don’t trust us, don’t believe that we’re out there trying to work on their behalf,’” Maher said. “They really felt unappreciated and bombarded by the media.”

Maher’s interest had been piqued. He thought the phenomenon he was hearing about warranted closer examination, and he decided to conduct a qualitative study.

“Tony heard about what I was doing and said, ‘I really find this interesting. I’d love to get some exposure to research. I’d like to be part of it,’” Maher said.

Their police backgrounds helped Michalka and Maher as they gathered the responses.

“I think it adds legitimacy to us in a number of ways,” Maher said. “First, we were able to read if, in fact, these statements appeared to be truthful and accurate based on our experience in policing.

“But second, it helped us get the interviews because I think it added some credibility and legitimacy to us. They realized we weren’t out just to hang these officers by asking some pretty probing questions about things that maybe wouldn’t make them look so good to the public. I think they trusted that we would not misrepresent them and that we would report exactly what we were told. And that’s what we’re doing.”

Michalka said they spoke to about 50 officers over the course of a year and a half, giving them ample qualitative data with which to work.

But a lot of what they were hearing was the same.

“An overwhelming majority said yes, the police are pulling back due to some fear of retaliation, whether it be their superiors not backing them because of political pressure, whether it be social media capturing them doing something the right way but putting a spin on it that’s misconstrued,” Michalka said. “A lot of them said it wasn’t them pulling back, it was the people they worked with. Everybody kind of deflected.”

Michalka took the lead presenting their findings in November 2018 at the American Society of Criminology Conference in Atlanta, and they are almost ready to submit a journal article with what they’ve learned.

It will add to the significant body of academic research that’s happened since Ferguson, including some quantitative studies examining police response.

“One thing I think that we really capitalize on here that makes our study interesting is that we were going out and gathering the data from the mouths of the St. Louis officers who are really at the epicenter of the change,” Michalka said. “UMSL being five minutes away from where all this really occurred in the United States, Tim and I have had the advantage to go out and talk to the officers working right here.”

It’s been an invaluable experience for Michalka as he works toward his PhD. He plans to examine call data in St. Louis city after Ferguson to determine if there were changes in how frequently people contacted police for various incidents. He’s hoping his findings will help reveal if there’s a problem with police legitimacy in the community.

Michalka’s pursuit of his PhD has been slow going with a lot of late-night writing sessions and coffee at 2 a.m. Unlike the majority of doctoral students, he’s continued to work full-time, now as the public information officer and recruitment officer in his 13th year at the O’Fallon Police Department.

The student he shared an office with when he started the program has now landed a faculty position at Georgia Southern University, and Michalka is still getting through his comprehensive examinations.

“He’s working very hard and juggling a lot of balls at one time,” Maher said. “I did it myself. I worked full time and went to get my PhD. It takes a little longer, but you just chip away at it slowly, and eventually, if you if you stick with it, it’ll happen. Tony’s a pretty bright guy. He’ll finish.”

Michalka knows how rewarding it will be when he does – and not just because he’ll be able to transition into an academic position when he’s ready to retire from the police force.

“I have two daughters at home, and if I can show them their dad could get his doctorate while he worked, hopefully that will set the bar higher for them for success,” Michalka said. “I’m a firm believer in that – that kids, try to mirror and mimic what you’ve done. So, if I can start now and put myself through this grueling pain, then they’ll be set up for success one day.”