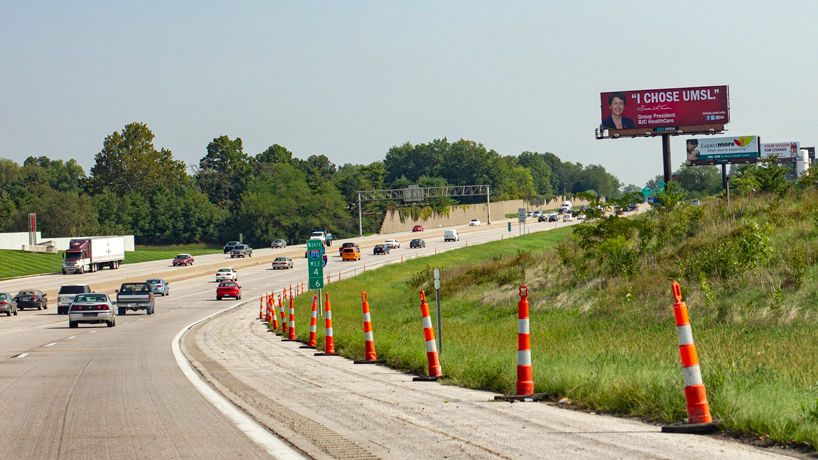 The newly created Missouri Center for Transportation Innovation will bring together researchers from across the University of Missouri System with the Missouri Department of Transportation to maximize the impact of state-funded transportation research. (Photo by August Jennewein)

A new collaborative center within the University of Missouri System aims to create innovative solutions needed to address crumbling roads and bridges across the state.

Jill Bernard Bracy, the assistant director of program development at the University of Missouri–St. Louis’ Center for Transportation Studies as well as an assistant teaching professor in the Department of Supply Chain and Analytics, will lead UMSL’s involvement in the MCTI as a member of the center’s operations cabinet.

“The goal of the center is really to utilize all four campuses and the expertise on all four campuses,” said Bracy. “Each campus brings their own unique skill set. The other programs are rooted in engineering, where UMSL is rooted in the business school, and I think that’s where we really add value.

“It’s obviously very important to have the engineering side of things and the study of the bridge structure and the pavement structure components, but we also need to think about how things are going to work for the users.”

MCTI researchers will be taking innovative approaches to address a number of transportation issues, including connected and autonomous vehicles, transportation safety, advanced materials for pavements and bridges, recycling and sustainability, resilience, big data in transportation, congestion relief and transportation policy and economics.

“Combining the strengths of the UM System universities with MoDOT through the MCTI is a clear expression of our mission to foster research that benefits the people of Missouri, the nation and the world,” UM System President Mun Choi said in announcing the center. “Building effective connections between our universities and the state will accelerate research breakthroughs and support economic development and improve transportation safety.”

The base funding for MCTI will be provided through the MoDOT state planning and research funding.

Bill Buttlar, the Glen Barton Chair in Flexible Pavements at the University of Missouri–Columbia College of Engineering, will serve as the center’s director, joined by John J. Myers, professor of civil engineering and associate dean of the College of Engineering and Computing at Missouri University of Science and Technology, as the deputy director. John Kevern, professor of civil and mechanical engineering at the University of Missouri–Kansas City will join Bracy to help round out the center’s operations cabinet.

“We believe the center is poised for rapid growth,” Buttlar said. “Building initially on a platform of successful state-funded projects, we will be able to attract more investors, thereby growing the number and size of research projects in the center. Once established, we can go to industry partners, other stakeholders and governmental agencies to leverage our resources and capabilities. If successful, Missouri will be recognized as a hotbed for national transportation research and innovation.”

Buttlar estimates less than a quarter of U.S. states have similarly formalized transportation partnerships among higher education and state and local agencies. In addition, national funding agencies have trended toward supporting more collaborative and interdisciplinary efforts over the last several years.

“Instead of all four campuses competing against one another for different research funds and research endeavors, we can work together with a collaborative process to utilize all the skills that each of the four universities brings,” Bracy said. “It makes us more competitive with other states.”

National Funding agencies such as the National Science Foundation, Federal Highway Administration and U.S. Department of Transportation have looked increasingly to fund projects that can only be tackled by large-scale partnerships. Buttlar said the MCTI should place Missouri at the leading edge of transportation improvements and open the door for key innovations that will have a direct impact on the state’s citizens.

An estimated $2.75 million in federally sourced research funds allocated to the Missouri Department of Transportation will flow through the center each year.

In her role, Bracy expects to help interested UMSL faculty members connect with the center to compete for funding or get involved with research projects. The center also will serve as an opportunity for engineering students to have real-world experiences while training to be the next generation of civil engineers.

Buttlar hopes the collaborative nature of the MCTI will lead to groundbreaking solutions for civil infrastructure, such as smart roads and materials.

“Until recently, we only dreamed of the possibility to make our transportation systems truly ‘hi-tech,’” Buttlar said. “Now with advances in low-cost, advanced sensors, smart materials and machine learning, we can harvest large amounts of data from roads, bridges and vehicles, and use that data to improve the safety, longevity and sustainability of the transportation network in Missouri and beyond.”