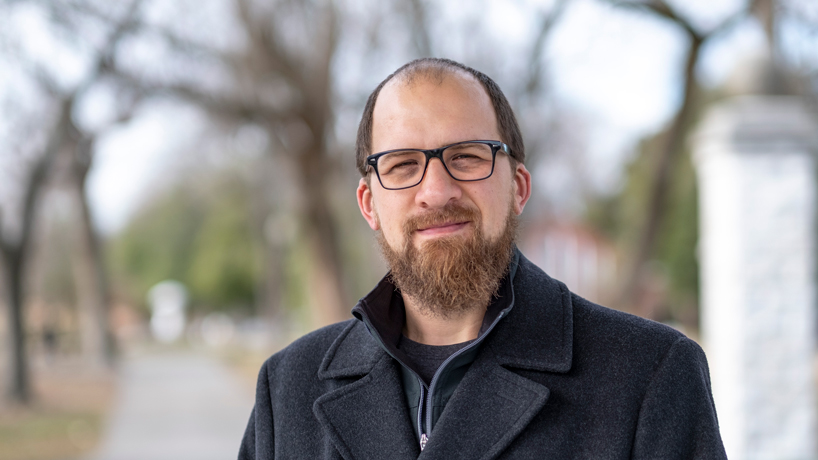 Joel Sjerven graduated with a master’s degree in social work from UMSL after spending time away from St. Louis, teaching English in Mexico and working at an alternative school and a homeless shelter in the Pacific Northwest. (Photo by August Jennewein)

Joel Sjerven seemed destined to be a social worker whether he realized it or not. He started college undecided about his future career path, but he has always worked to help people, from teaching in a foreign country to working at a homeless shelter.

Those experiences eventually led him to enroll in the social work program at the University of Missouri–St. Louis in 2017. Sjerven will graduate this December with an MSW and start a full-time position as a behavioral health consultant at Family Care Health Centers in January.

The path to an MSW and his new position included two countries, several jobs and even more years.

Sjerven began his academic career about 20 years ago, attending community college in St. Louis. He transferred to the University of Missouri–Columbia to finish his degree but quickly ran into a problem. He had accumulated so many credits that he was forced to declare a major – a decision that weighed on him.

“I was like, ‘That’s kind of intense. I don’t know what I want to do for the rest of my life,’” Sjerven said.

An interest in psychology turned out to be the solution. Most of the credits he had earned were in the subject, and MU officials noted that it would be the clearest path to a bachelor’s degree. He took their advice.

Soon after graduation, Sjerven took a job at Places for People in St. Louis. The organization was founded in response to the federal policy of deinstitutionalization and provides a community space for people to receive mental health and substance use disorder services. He loved the job and worked there for a little more than two years but felt that he needed a drastic change.

Eager to expand his real-world experience, Sjerven knew he wanted to leave Missouri. His first stop was Mexico where he taught English for two years. Ostensibly, he was there to educate, but really, he wanted to learn, to study the country’s culture and language.

The family-orientated lifestyle he saw there compelled him to reconnect with his brother, who had settled in Los Angeles, after his teaching stint was over. Unfortunately, the city didn’t click with him, and after a little while, he anticipated returning to St. Louis. But, first, there was pit stop in the Pacific Northwest.

“I wandered up through Portland, Oregon,” Sjerven said. “I wanted to check it out before I came back to St. Louis, but I ended up staying in Portland for about five years.”

The time in Portland proved to be formative for Sjerven’s future career in social work. He worked in a number of environments including an alternative school for youth transitioning out of the juvenile justice system and a homeless shelter where he helped men transition back into housing.

“That was really an incredible job,” he said. “I really learned a lot and am really grateful for my time there.”

These experiences provided a foundation in administering social services, honing practical skills Sjerven would go on to use in his master’s coursework and a practicum at Family Care Health Centers, a leading integrated health care organization.

All told, Sjerven spent about a decade moving from city to city – not ready to commit to one place. About five years ago, he found his way back to St. Louis.

“During that time, I didn’t know where I was going to be for two or three years to knock out a master’s program,” Sjerven said. “It wasn’t until I came back to St. Louis that I felt like I was ready to make that commitment.”

He considered his options for graduate school in the area, but the students and faculty at UMSL made it an easy choice.

“The reason I chose UMSL was I really wanted a more diverse peer group,” he recalled. “UMSL students, particularly social workers, have more lived experience. Most of them are already doing the work. I felt like the better fit for me is the place where people are doing the work and have been doing the work. That’s what I got, and that’s what I enjoyed.”

While studying at UMSL, Sjerven looked into the Behavioral Health Workforce Education and Training program, designed to develop and expand the behavioral health workforce. If he could find a practicum at an integrated health facility, which provides mental and physical health services in the same setting, he would be eligible for a stipend through BHWET.

Sjerven reached out to an old acquaintance who happened to work at Family Care Health Centers and secured an interview and a practicum offer in short order. The practicum, which is similar to an internship in the social work field, required 600 hours of experience in the practical application of theory.

“It started with me just shadowing a lot – my supervisor and other coworkers – and getting oriented to the clinic and how everyone does everything,” Sjerven said. “Shortly after that, one of our team members went on maternity leave. So, the timing was perfect. I felt like I was ready to hop in and do the work, and they needed someone to cover her caseload.”

It gave Sjerven the opportunity to work one-on-one with people at the clinic – something he was looking forward to.

“Essentially, it’s therapy that’s really focused on behavioral goals,” he said. “That can be really specific to mental health or it could be something like, ‘I would like to quit smoking’ or ‘I’d like to lose 5 or 10 pounds.’ It’s nice because it was really client focused.”

He felt like the role was a natural extension of his previous work and something UMSL had prepared him to do. The MSW program includes a class dedicated to integrated care and also prioritizes getting social workers experience in medical clinics.

“Doing therapy has always been the next step for me or, at least, has been a big interest of mine,” Sjerven said. “Doing the work felt really similar to what I’ve been doing all my life in different settings.”

As Sjerven finished his 600 hours and prepared for graduation, an opportunity to extend his practicum into a full-time position at Family Care presented itself. His coworker was returning from maternity leave and another was set to retire at the end of December.

He couldn’t have planned it better.

“The timing was exceptional because I got some training and then I got to apply the training directly on my own, and right as I finished, there was a position opening,” he said. “Everything really fell into place beautifully for me.”