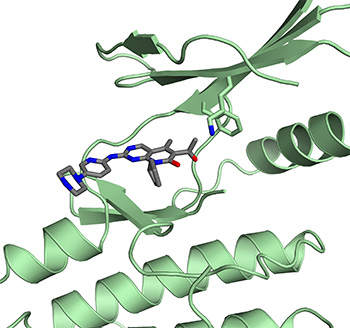 The breast cancer drug palbociclib (grey) interacts with its target protein CDK4 (green) in this structural model. Binding of the activator protein p27 to CDK4 changes CDK4 structure such that the drug loses potency.

Palbociclib is clinically approved for use in treating breast cancer, but according to a new study, the molecular mechanism behind the drug’s effectiveness is not what scientists had thought it was.

Seth Rubin, a professor of chemistry and biochemistry at UC Santa Cruz, said the new findings, published December 13 in Science, emerged from his team’s research on the structures of the protein molecules the drug interacts with.

“This is important for understanding why certain cancers are resistant to palbociclib and why breast cancer cells can develop resistance,” said Rubin, the corresponding author of the paper. “It explains the mechanism of the drug and allows people to think about designing new drugs that would better overcome resistance.”

Rubin’s lab was focusing on a protein called CDK4 (a cyclin-dependent kinase), which drives cell proliferation by partnering with other proteins to inactivate the retinoblastoma protein (Rb). Rb is a molecular gatekeeper that, in its active form, stops the cell from progressing through the cycle of cell growth and division.

Palbociclib (and the related drugs ribociclib and abemaciclib) was designed to target CDK4 and block it from inactivating Rb. The drugs were developed by testing them against a purified complex of CDK4 and the protein that activates it, called cyclin D. Rubin was interested in a third protein, called p27, which is also involved in regulating CDK4. So his team determined the structure of the whole three-protein complex as it occurs in cells, with CDK4, cyclin D, and p27.

“When we solved the structure with p27, we were surprised to see that it looked like the drug wouldn’t be able to bind to it,” Rubin said. “So we tested it, and sure enough, the drug doesn’t bind and can’t inactivate the protein complex with p27.”

Further research using breast cancer cells yielded more clues to what the drug is actually doing. The results indicate that instead of inhibiting the active CDK4 complex, palbociclib binds to CDK4 alone and prevents it from forming the active complex with cyclin D and p27. This then leads to inhibition of a different cyclin-dependent kinase, CDK2, blocking it from inactivating Rb.

“So the drug not only prevents CDK4 assembly, it also indirectly inhibits CDK2,” Rubin explained. “When cancer cells develop resistance, it’s often because they start to turn up CDK2 activity.”