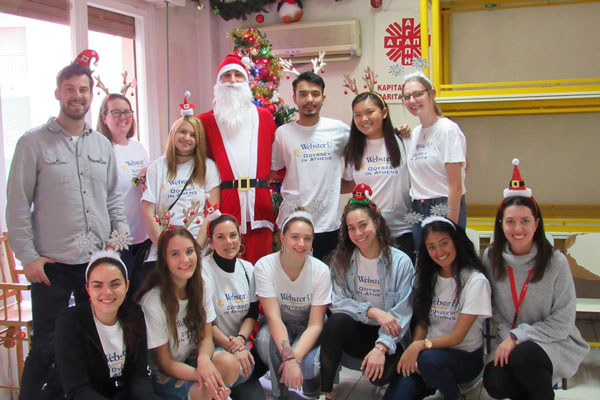 Webster Athens students planned and organized the party, transforming the center into a festive wonderland for over 100 refugee children

For the fifth year in a row, Webster Athens study abroad and local students, under the direction of the Office of Student Affairs, coordinated a holiday celebration for refugee children at the Caritas Refugee Center. The party took place on Dec. 13, at the facilities of Caritas Hellas, where approximately 100 children and their families had a chance to enjoy the festivities and forget about their difficulties for a while.

Most of the families were from Syria, Afghanistan, Iraq, Iran, Eritrea, Nigeria and the Congo, where they fled to Greece to seek refuge. They come to the center daily with their families for a meal and have a chance to play and interact with one another. This day gave the children a chance to laugh and play together.

The planning for the party began several months earlier when the director of student affairs, Dina Skias, met with the students and asked if they would be willing to organize the event this year. Everyone agreed, and the organizing began with a fundraising campaign initiated by two of the Webster study abroad students, Joey Elking and Minnell Fundora. The students were pleasantly surprised to see previous study abroad students contribute to their efforts. Several of the previous students had also participated in organizing this event when they studied abroad and left messages of encouragement, praising the current students for their efforts.

After multiple meetings and shopping trips to get the supplies and gifts for the kids, the party was ready to take place. The center was decorated to a festive winter wonderland, and the children were so excited to be there. They were served pizza and juice, and the students played and danced with them. Santa, who was played by Joey Elking, a junior business management student from Webster St. Louis, was also on-hand to greet the kids. The kids surrounded him constantly wanting to take photos together. He did a great job keeping the party festive. He also gave out a gift bag to each child at the end of the party. Each gift bag contained a sketch pad, a set of colored pencils, a ball, fidget spinner, dominos, yo-yo, bubbles, a bag of crackers, a croissant, and chocolates.

“Being Santa was new to me. It was hard trying to portray this big, jolly, red-suited man with a luscious beard,” said Elking. “But, it wasn’t about the look, even though my pillow would fall out of my sweater and kids would pull on my fake beard, it was about the spirit and joy you created in that brief moment. I enjoyed being part of this. People were excited, happy; they were lit up! And that, that’s why Santa loves what he does!”

Once again, Toto, the clown, was the highlight of the party and provided great entertainment for the children and their families. He wowed them with his creations of animal balloons and his magic tricks. The kids never stopped laughing. He got everyone to participate and get up to dance, even the parents. Also, a talented face-painter was on-hand to offer the kids the drawing of their choice. Toto decorated their faces with themes from kid’s movies or holiday themes. They waited patiently until it was their turn, while Webster students kept them occupied. Even some of the students got their faces painted. 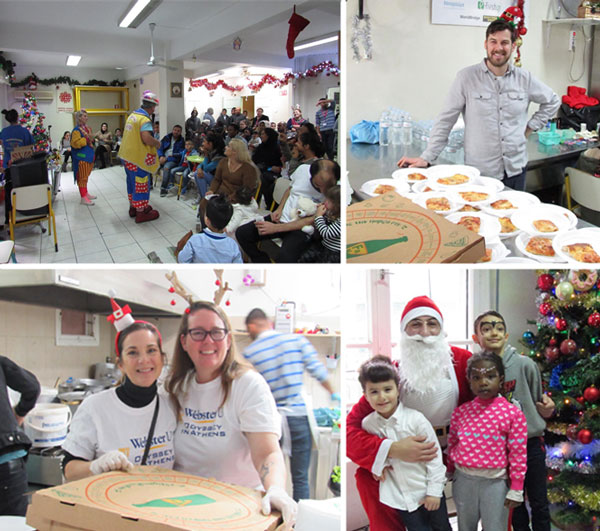 Students and faculty celebrating the 2019 holiday at the facilities of Caritas Hellas, providing approximately 100 children and their families a chance to enjoy the festivities and forget about their difficulties for a while.

This year, two visitors from Webster St. Louis also participated in the holiday celebration. Danielle MacCartney, associate professor of Sociology, Women, Gender, and Sexuality Studies, and Tyler Worlund, study abroad advisor, was in Athens at the time visiting the campus.

They both assisted in the final shopping trip to purchase supplies for the center. Canned milk, diapers, baby wipes, and sanitary pads for women were purchased with the extra funds from the fundraising campaign. They also provided valuable assistance at the party, helping to serve the pizza and play with the children.

“It was great to see Webster Athens doing such good work in the community,” said MacCartney. “The students were engaged, and the children from the center were laughing and having a great time. This is a great way to end the semester, and I’m glad I had the opportunity to be a part of it!”

“Overall, it was a very successful event. I am very proud once again that the students stepped up and provided a day the children and the parents will not forget. The children have been through so much adversity at such a young age and have been uprooted from their homes,” said Dina Skias, director of Student Affairs. “This day gives them a chance to laugh and play together as they should be doing. It has become an annual event, and the refugee center noted it is the highlight of the year for them. We enjoy being a part of this and having the students get involved in this way. We hope to continue this effort again in the future.”

In addition to the holiday party, the Office of Student Affairs collected blankets, winter coats, shoes, and socks that were delivered to the organization METAdrasi. This organization provides needed support and care for refugees arriving in Greece. This year, they were awarded the Conrad N. Hilton Humanitarian Prize. This is the largest humanitarian prize given for the organization’s innovate approach to welcoming refugees and protecting unaccompanied minors.

Also, at the beginning of the semester, the students participated in the annual Walk for a Cure for breast cancer organized by the organization, Alma Zois. This event is the largest walk/run race that strives to bring awareness, offer support and fight breast cancer. Over 30,000 participants of all ages filled the streets of Athens and the Webster Athens team was there proudly wearing our Webster Athens t-shirts. 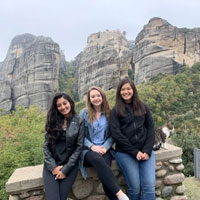 In addition to their service work, the students had a chance to learn first-hand about several archaeological sites during the program excursions and field trips.

They also visited several museums and archaeological sites around Athens, marveling at how they stood through time. Webster Athens wishes all the study abroad and local students the very best for a happy, healthy and loving holiday season.