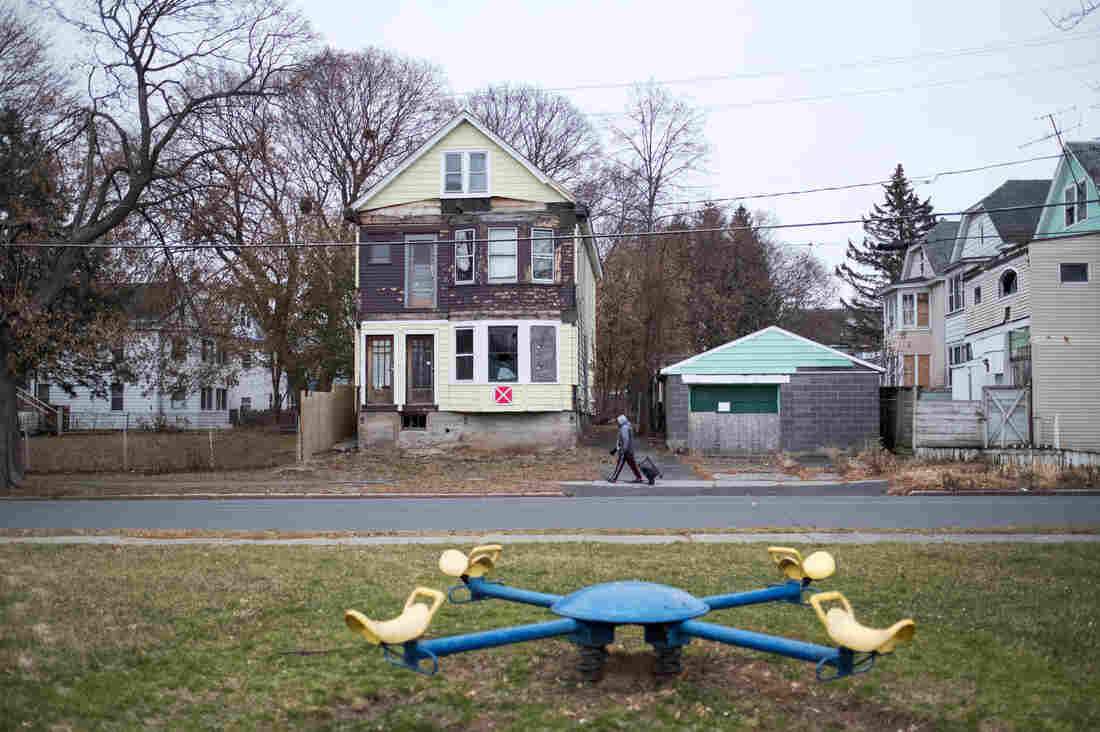 Vacant homes marked as unsafe structures in the West Hill neighborhood of Albany, N.Y. New data from the Institute for Child, Youth and Family Policy at Brandeis University reveal a sharp racial divide in access to opportunities in almost every major metropolitan area of the country, including Albany. Richard Beaven for NPR hide caption

When it comes to children’s prospects in life, the neighborhoods where they grow up matter a lot. Schools, safety, access to healthy food, places to play are all things that help to shape their futures.

Now, new data from the Institute for Child, Youth and Family Policy at Brandeis University reveal a sharp racial divide in access to such opportunities in almost every major metropolitan area of the country.

Most white children in the United States live in neighborhoods with high levels of opportunity, while most black and Hispanic children live in ones with low opportunity, according to the research. Often, these neighborhoods are just a few blocks apart. NPR got an early look at the data, which will be publicly available early next year.

Brandeis professor Dolores Acevedo-Garcia calls the findings “disturbing” and says the pattern is repeated in communities across the United States.

“We see really vast inequities between black and white children, as well as between white and Hispanic children,” she says.

It’s surprising not that such disparities exist but that they are so pervasive. The Brandeis group is still analyzing the new data, but Acevedo-Garcia says she sees no sign that the racial divide has improved in recent years. 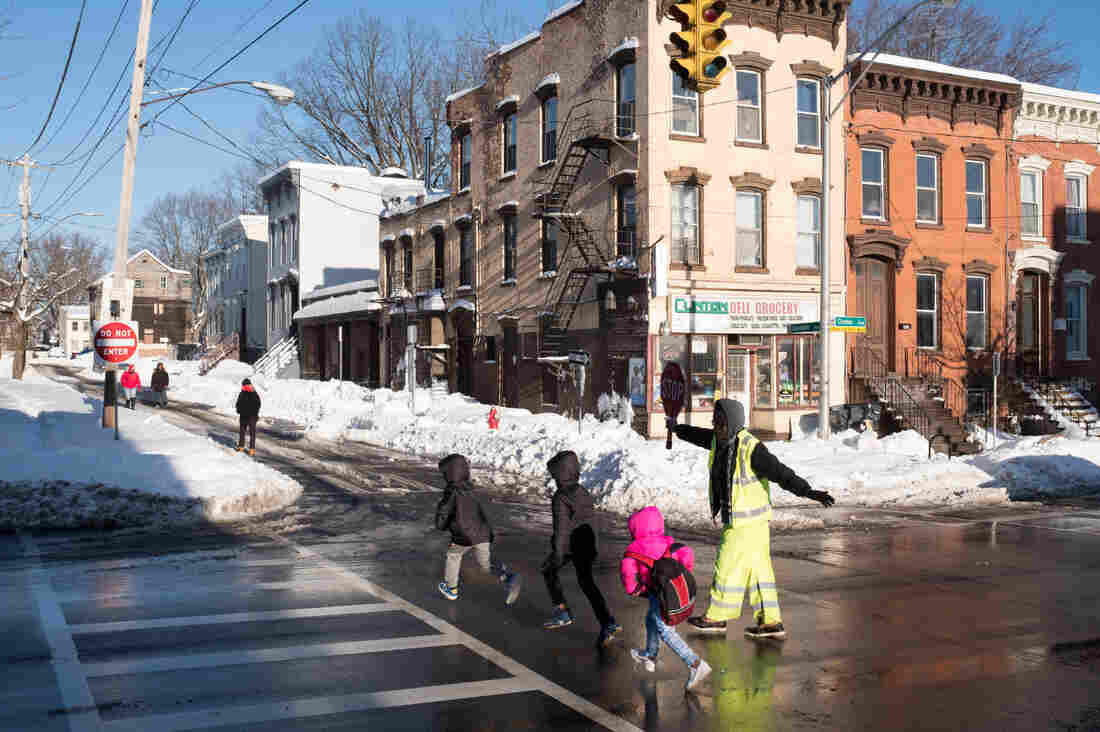 Children cross the road into Albany’s West Hill neighborhood. While the neighborhood is close to the state Capitol building, many streets have boarded-up homes with red signs posted by the fire department. The signs indicate that there is potential the buildings could collapse. Richard Beaven for NPR hide caption

The researchers also found that some of the greatest disparities are within metropolitan areas, with resources often concentrated in the suburbs and a few select city neighborhoods.

The city’s Arbor Hill and West Hill neighborhoods, not far from the state Capitol building, are among its most impoverished. The streets are lined with boarded-up homes, which are marked by big red signs with large x’s slashed across the middle — put there by the fire department. 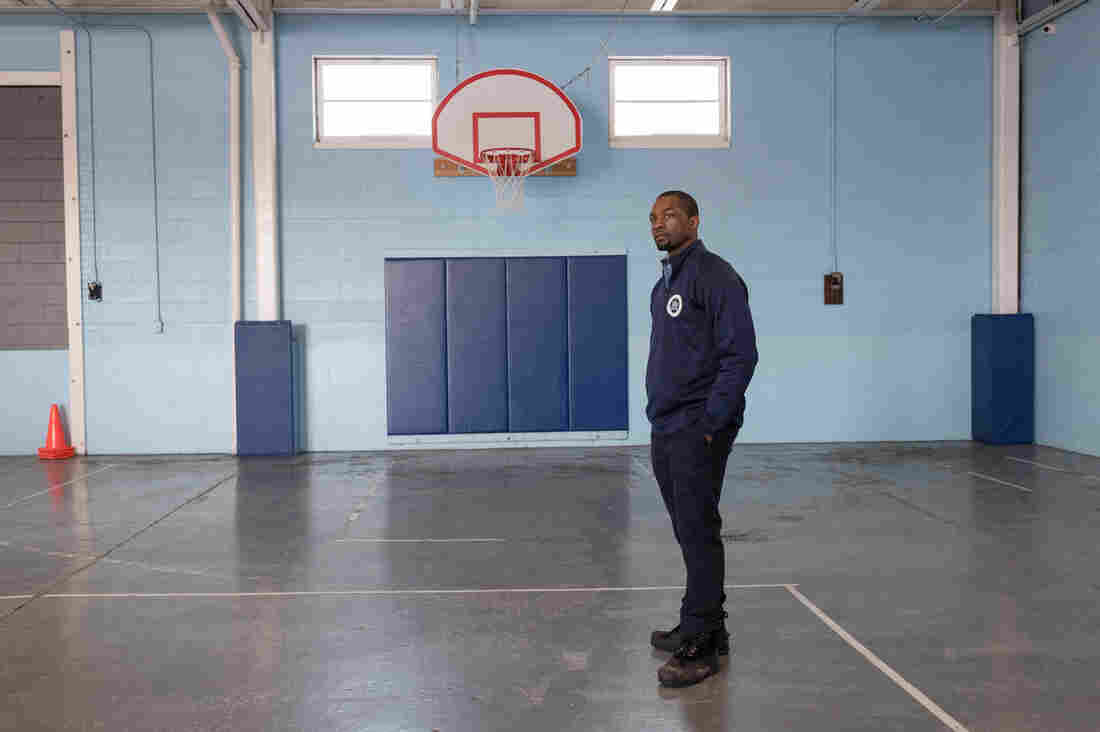 Albany Commissioner of Recreation Jonathan Jones is working on ways to bring more opportunities to children in neighborhoods like Arbor Hill and West Hill. He and his family moved to Arbor Hill and are renovating a once-abandoned building nearby. Richard Beaven for NPR hide caption

“A signal to let them know in case of emergency that the structure could fall. It’s a danger, pretty much,” says Jonathan Jones, the city’s commissioner of recreation, youth and workforce services.

Jones is among those trying to turn things around by pushing more city investment into the area. He has been using the child opportunity research to help guide those efforts and points to a small neighborhood park with freshly painted playground equipment on what used to be an empty lot.

“Now we have this open space for young people,” he says. “You can work out there in the back, and the little kids can play in here.” 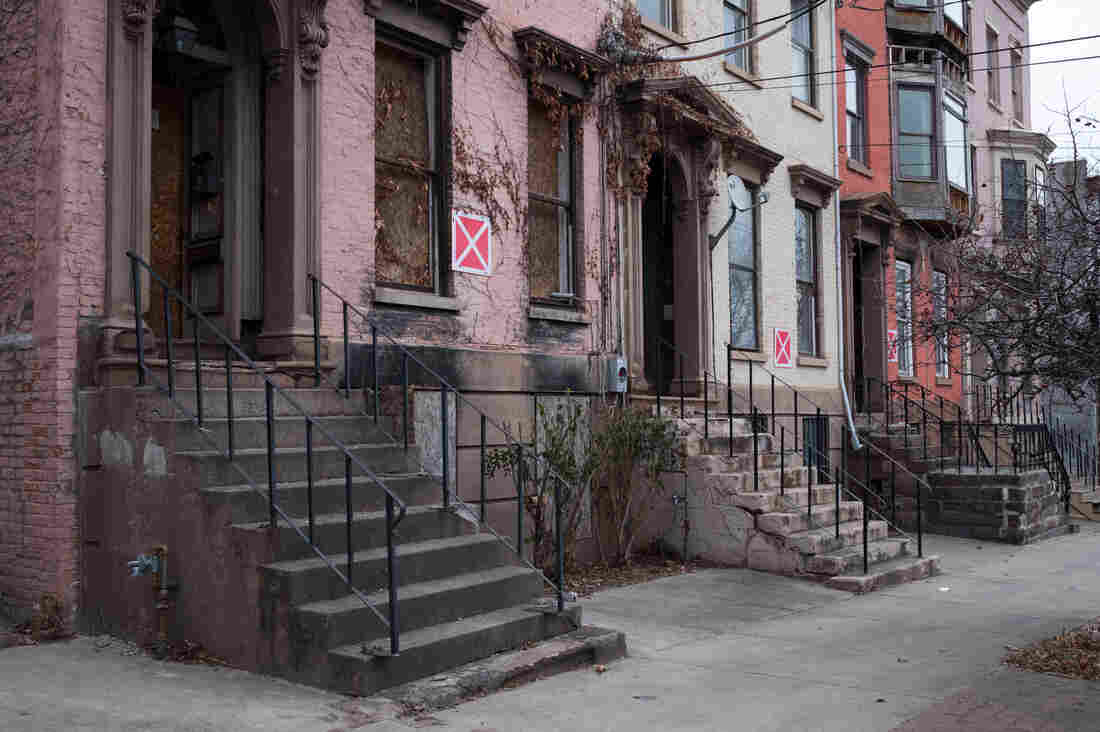 A row of vacant homes are marked as unsafe structures in Arbor Hill. More than a quarter of the buildings in the neighborhood are abandoned. Richard Beaven for NPR hide caption

It’s one of many parks the city has recently fixed up to help revitalize some of its struggling neighborhoods. But it’s a small step in what promises to be a major challenge.

Arbor Hill is one of the lowest-opportunity neighborhoods in the country for kids, according to the new data. The researchers used 2015 census data to profile every neighborhood in the country, considering factors such as graduation rates, health insurance coverage, the number of single-parent households, income and child poverty rates to come up with something called a Child Opportunity Index. Areas were rated from 1 to 100, with the highest numbers for places with the most opportunity.

Arbor Hill received a score of 1. More than a quarter of the buildings in the neighborhood are abandoned. Green space is limited. Single parents head 86% of families. Unemployment and poverty are high, and 97% of the children who live there are black or Hispanic.

Justin Gaddy, a former gang member, says he sees the consequences firsthand. He’s with an anti-violence group called SNUG, which stands for Should Never Use Guns. A tally on his office wall shows it has been only 14 days since the neighborhood’s last shooting, which happened right by the new park. Gaddy’s group wants to keep neighborhood kids from becoming the next statistic.

“Some of them, you know, they got just a mother at home, with three or four siblings and stuff like that, and the mother has to work. She’s by herself and sometimes these kids are left alone,” he says. 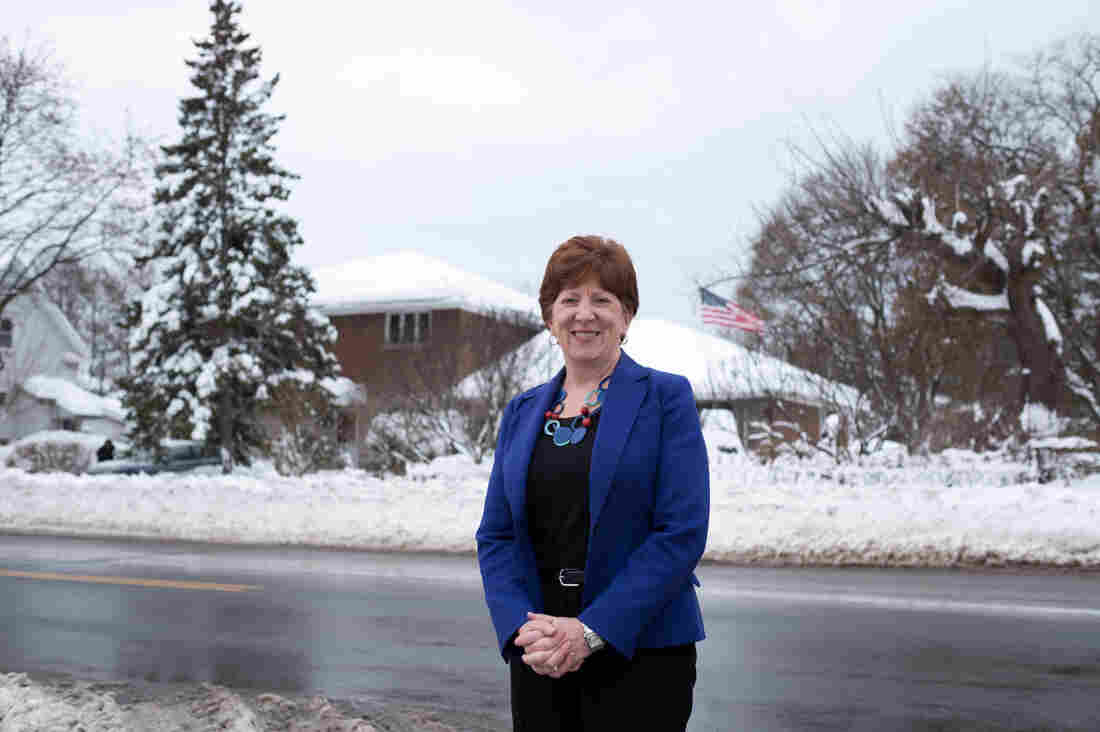 So SNUG workers try to intervene by, among other things, directing the neighborhood youth into activities, like sports, to keep them busy. But recreational outlets here are limited.

Even Albany’s mayor, Kathy Sheehan — who recently moved to Arbor Hill from one of the city’s more affluent areas — knows this neighborhood isn’t always the best for kids.

“We have children walking to schools on streets that I wouldn’t want my son to walk to school on,” says Sheehan. “Not necessarily because they aren’t safe, but because of the message that they send. The message of disinvestment. The message that nobody cares.” 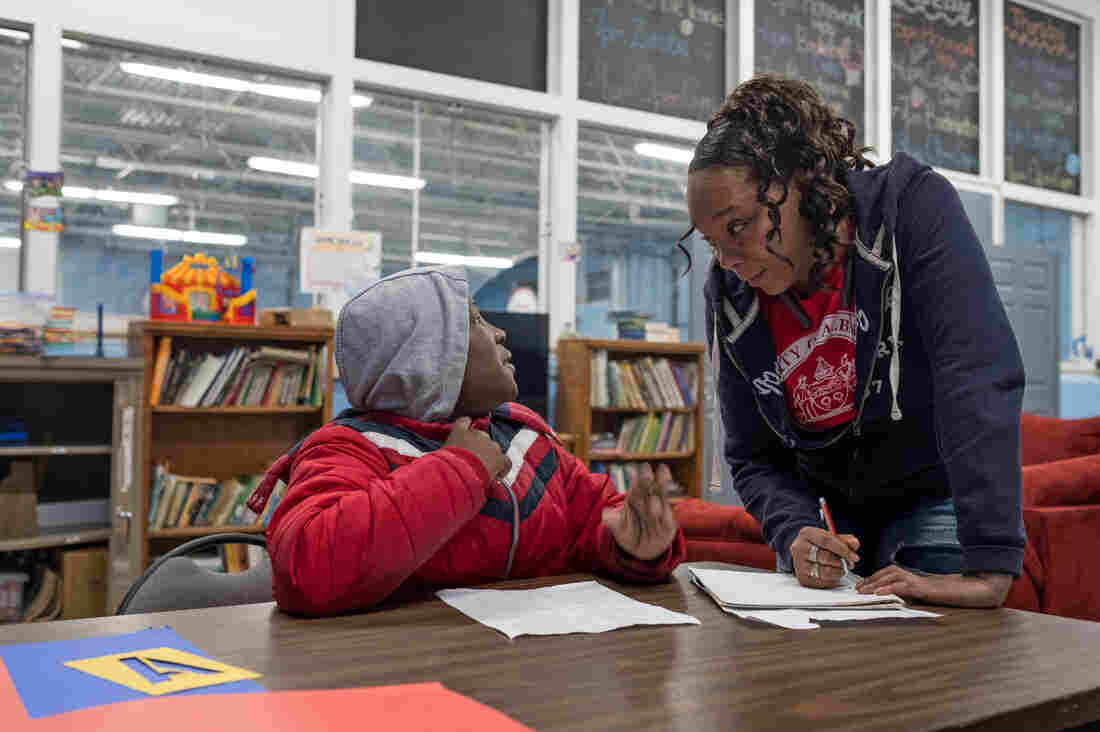 Tasha Rivers (right), program director at the Hoffman Recreation Center, helps a student with his homework at an after-school program. Richard Beaven for NPR hide caption

So aside from fixing up parks, the city has started several new programs for teens, including one after school that teaches them about careers and provides internships at local businesses.

Fifteen-year-old Adeja Wright, who wants to go into marketing, finds the program helpful. But she says the real eye-opener for her came when she attended private school for a year in a wealthier part of town. Adeja says she was one of the few African American students and called herself the only poor girl in her class.

“I went to my friend’s house and she had floor heaters. I’m like there’s floor heaters? That’s a thing? You can heat your floor?” she said.

Adeja realized that just a few blocks from her home, there was a whole other world. 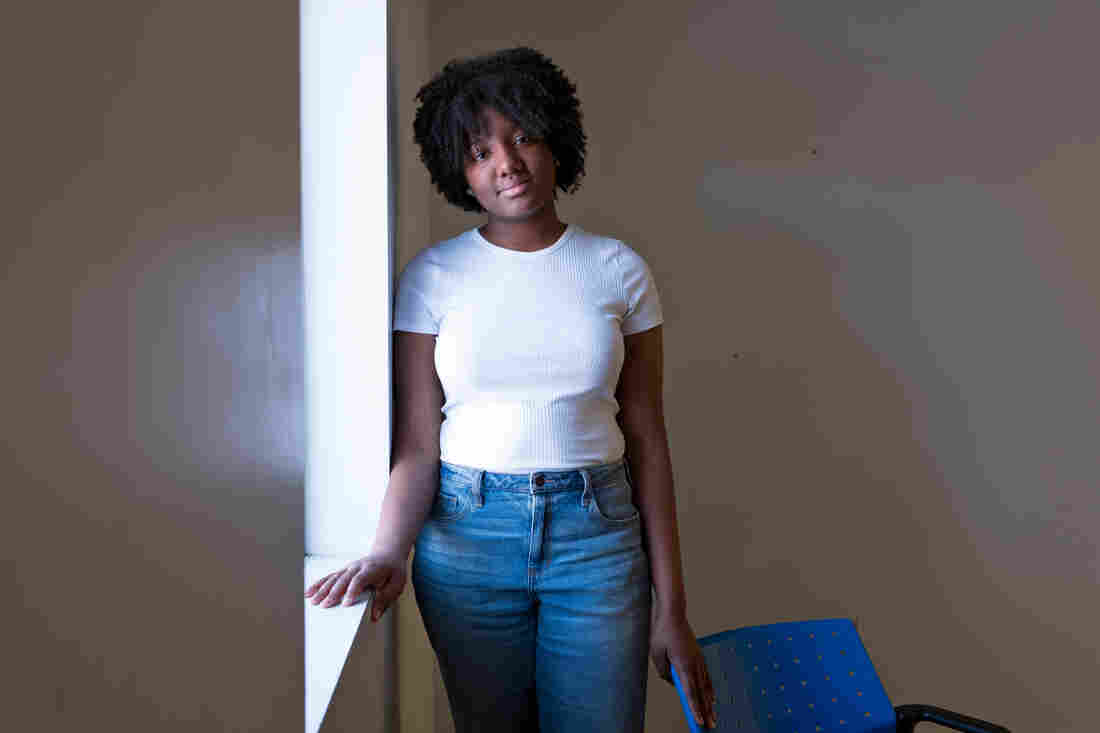 Adeja Wright, 15, is a participant in the after-school Youth Innovation Program in Albany. She attended a private school for a year in a wealthier part of town and realized that just a few blocks from her home, there was a whole other world. Richard Beaven for NPR hide caption

In fact, the new research finds that while the Albany region is among the best in the nation when it comes to opportunities for children, those opportunities are not shared equally.

Buckingham Lake, on the west side of the city, is a far cry from Arbor Hill. It was given a child opportunity score of 89. The streets are lined with neat single-family homes. The area has a large lake and plenty of open space. About 71% of the houses are owner-occupied, compared with about 20% in Arbor Hill. The median income here is nearly three times higher, and only 20% of the households are headed by a single parent. About 60% of the children living in the neighborhood are white. 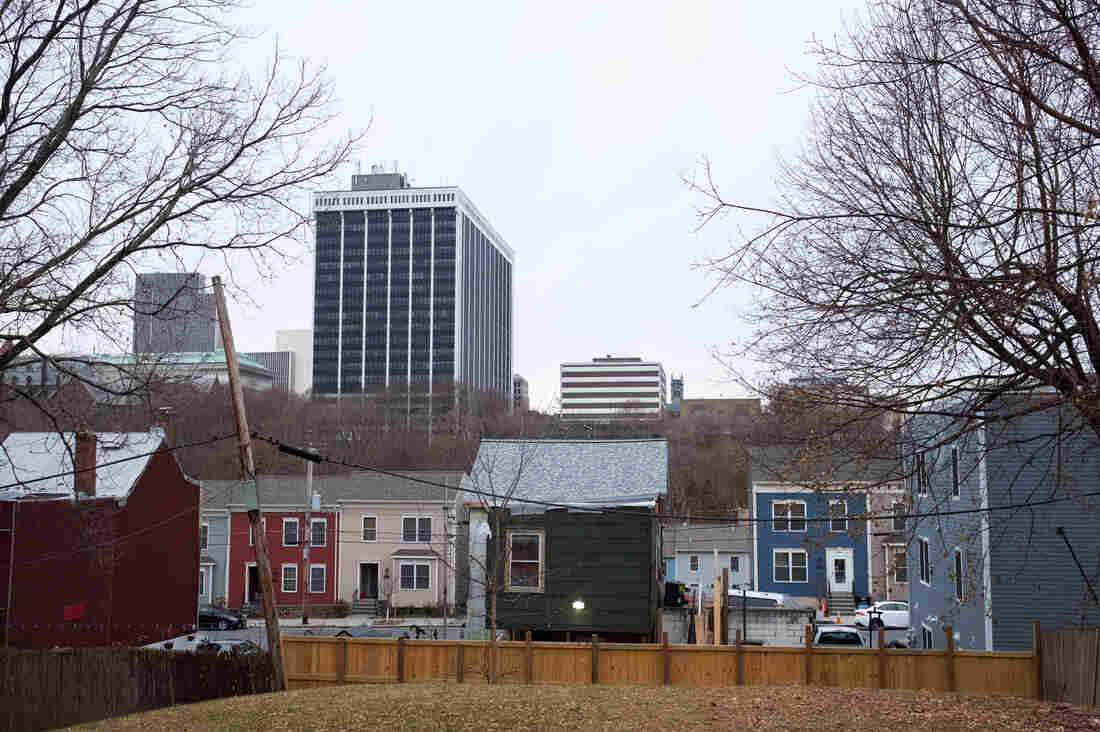 Arbor Hill is one of the lowest-opportunity neighborhoods in the country for kids, according to the new data. Richard Beaven for NPR hide caption

Harris Oberlander, a nearby resident, says this area was a great place to raise his kids because of all the resources.

“There were Catholic churches and Jewish temples and all sorts of services,” he says. “All the outpatient clinics for the local hospital are lined up along some of the boulevards there.”

He and his wife had easy access to grocery stores, good preschool programs and, most important, a network of close friends.

“We literally raised our children with different people babysitting for one another. It’s the social fabric of the neighborhood that helped us raise our children,” he says. 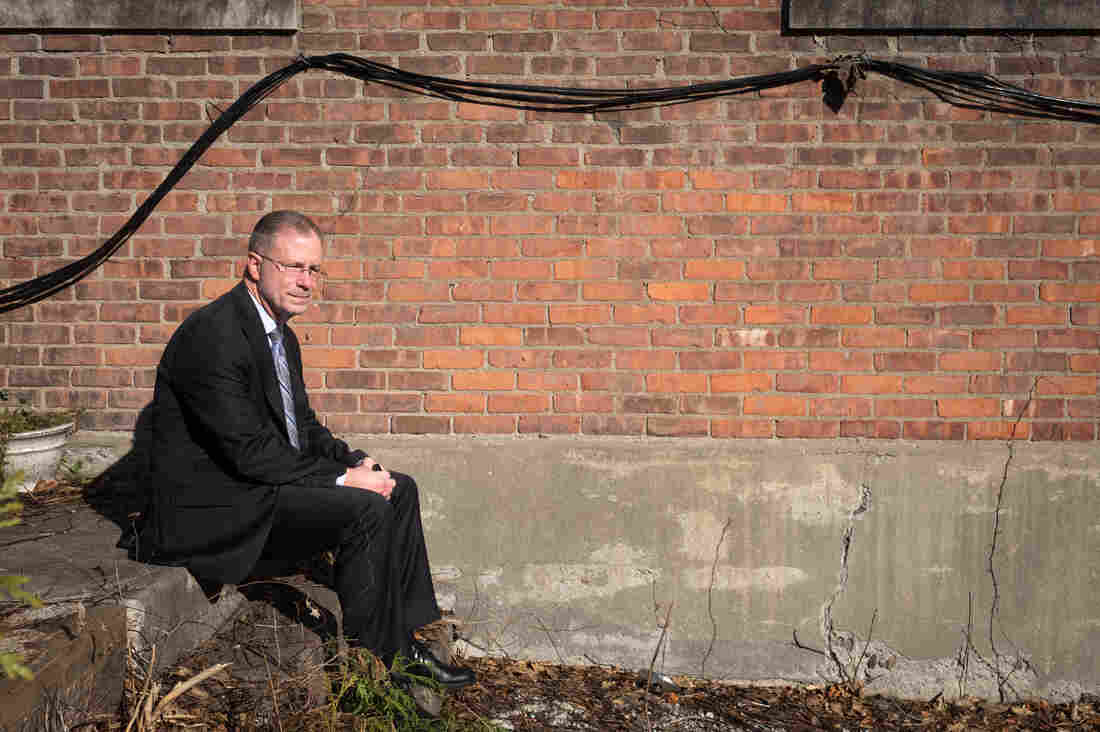 Harris Oberlander runs the nonprofit Trinity Alliance of the Capital Region. Many of the residents the alliance helps tend to be renters who move frequently, making it difficult to build a supportive community. Richard Beaven for NPR hide caption

Oberlander knows how important such support is because he works in Albany’s poorest neighborhoods. He runs Trinity Alliance, a nonprofit that provides food, medical assistance and other services readily available on the other side of town. He says many of the residents in low-opportunity neighborhoods work and hold down two or three low-paying jobs to make ends meet. They also tend to be renters who move frequently, making it difficult to build a supportive community.

Back in Arbor Hill, recreation commissioner Jones says that is what he is trying to do. He drives past a two-story brick house on the edge of the neighborhood, overlooking downtown. “This red house is my house,” he says. 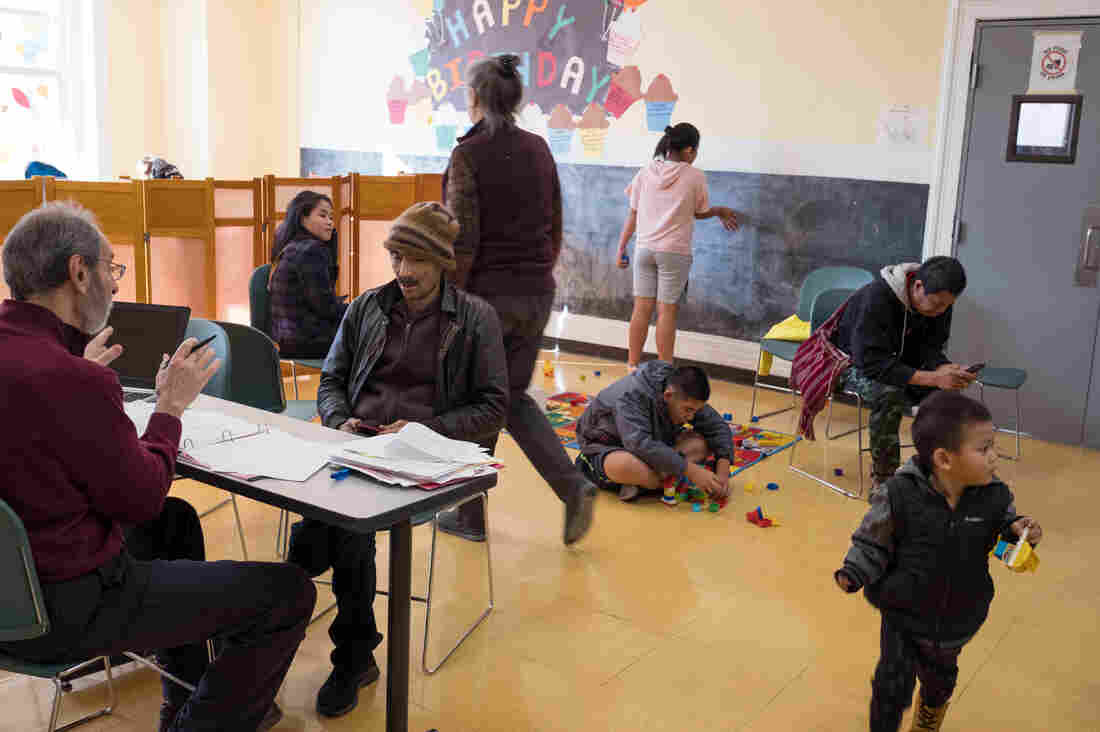 Like the mayor, Jones and his family have moved here and are renovating a once-abandoned building. He is optimistic that soon others will see this as a desirable place to live. Albany is not only upgrading parks and offering more activities for kids but providing grants to turn vacant buildings into affordable housing. Jones knows it’s a long haul, but he hopes that eventually his children and others growing up here will have opportunities much more in line with the rest of the metropolitan area.

Editor’s note: The Robert Wood Johnson Foundation is one of the funders of the Brandeis research and also a financial supporter of NPR.