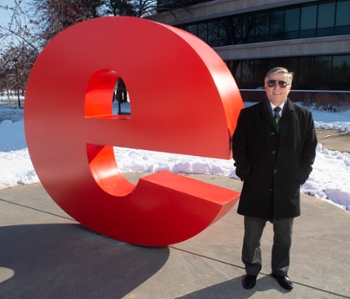 An “e” sculpture made its debut Tuesday, Dec. 17 in Southern Illinois University Edwardsville’s Hairpin. Dave Thomas Design of Edwardsville created the seven-foot tall, seven-foot wide monument. SIUE alumnus Dave Thomas, who earned his bachelor’s in art and design from SIUE in 1972, is the owner of the design company.

“The sculpture is made of metal and has an internal steel structure that gives it resilience. The exterior is painted to match the SIUE red,” said Vice Chancellor for Administration Rich Walker. “The idea of the sculpture came from a compilation of thoughts between SIUE Chancellor Randy Pembrook, SIUE Creative Director Heather Kniffel and myself. We wanted to better brand the Hairpin and also provide photo opportunities for students, alumni and visiting guests.” 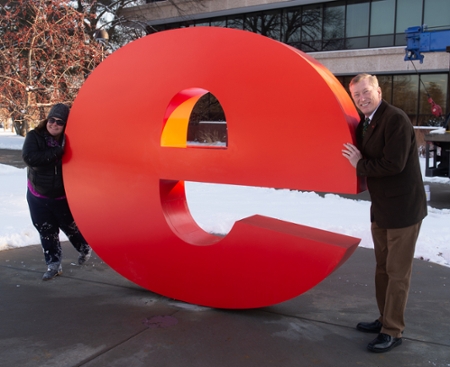 The statue cost approximately $20,000 to design, fabricate and install, and an anonymous donor to the SIUE Foundation donated the monies, according to Walker.

“If the campus response is good, I’d like to install a few more ‘e’s’ on campus,” said Walker. “Hopefully, there will be other donors who like the idea.”

“The sculpture is going to bring a lot of smiles to a lot of people,” added Walker. “It will be the new hot spot to have your picture taken at SIUE. I see a lot of Facebook, Instagram and Twitter posts in the future.”

“Even though the campus was fairly quiet, the excitement from those passing by while it was being installed was palpable,” said Kniffel. “I can’t wait to see the student’s faces when they notice it after coming back from the holiday break.”

Photos:
SIUE Chancellor Randy Pembrook get his photo with the newly installed “e” at the SIUE Hairpin.

Working to bring the “e” sculpture to fruition and to campus were SIUE Creative Director Heather Kniffel (left) and Vice Chancellor for Administration Rich Walker.