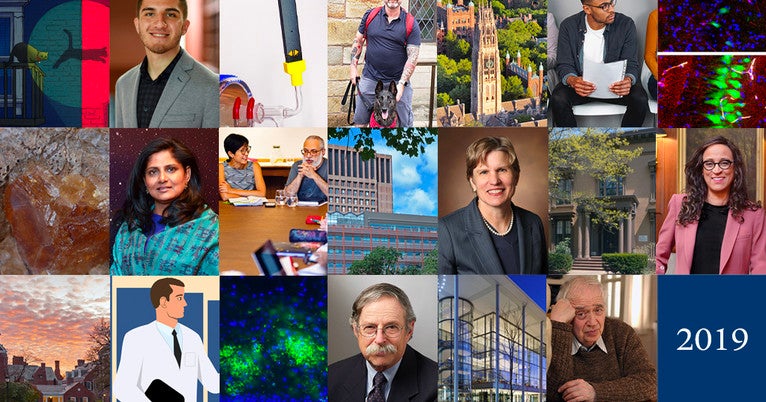 Putting together a list of top Yale stories for any year can be a daunting task — especially when you have more than 1,600 to choose from (that’s how many we published on YaleNews in 2019) and when each documents something about Yale that makes us proud.

This year, we offer two lists of 10 stories: those that were most popular among our readers, and those that look at major initiatives and happenings on campus in 2019.

Yale physicists developed an early warning system to detect when atoms containing quantum information are about to jump (or change states), giving them time to snatch Schrödinger’s fictional feline from its theoretical box before it meets its doom. This was the single most-read YaleNews story of 2019.

Yale scientists served up a drinkable cocktail of designer molecules that interferes with the progression of Alzheimer’s — and even restores memories (in mice).

Months after Yale experts warned that nicotine addiction from vaping is a bigger problem than teens realize, university researchers found that byproducts of chemical reactions in flavored liquids of the popular Juul e-cigarette can irritate users’ airways. The news prompted some bans of the product.

This story, one of the year’s five most-read, won national attention for James “Jimmy” Hatch, whose lust for learning brought him from Afghanistan to Yale, where he is studying through the Eli Whitney Program for non-traditional students.

The move to electronic health records was supposed to improve quality and efficiency of healthcare. This study showed it has led to a high burnout rate among medical professionals.

Yale researchers disproved the long-held assumption that the brain’s molecular and cellular activities irreversibly end once death occurs. This discovery prompted Nature magazine to name principal investigator Nenad Sestan to its list of 10 scientists who made a difference in 2019.

A taste for fat may have made us human, says study

Long before they hunted large mammals themselves, our human ancestors ate marrow from the bones left by other predators. This fatty diet provided them with the nutrition needed to develop big brains, a key step in evolution, said Yale anthropologists. Another well read story reported on a study showing that the high-fat, low-carbohydrate ketogenic diet can help fight off the flu.

Professor Priyamvada Natarajan was a graduate student at Cambridge University when she predicted that cosmic winds from black holes had the power to carry star-making materials to other galaxies — a theory that a recent study by her and an international group of astronomers has confirmed. Another especially popular astronomy story offered a close-up image of the comet 2l/Borisov as it approaches Earth.

In this new first-year seminar taught by Professors Shawkat Toorawa and Tina Lu, students studied six centuries-old works to learn about the cultural context of the times in which they were written and to understand how many of those topics are timeless.

Scientists will wrestle with key questions facing life on Earth in the 21st century in the new, $283 million facility, which formally opened Oct. 29. In addition, Kline Tower will be renovated as part of a “re-envisioning” of how researchers on Science Hill work together, and the Yale Peabody Museum has been moving 4 billion years of its natural history collections to West Campus in advance of a multi-year renovation.

Appointed by President Peter Salovey this fall, the Task Force on Net Zero Carbon Emissions is part of Yale’s Climate Action Initiative, which aims to reduce greenhouse emissions in campus facilities and operations.

There has been a world of research on climate change at Yale this year, including a study of how a mega-drought brought about the collapse of the Neo-Assyrian empire in 612 B.C.E.

Other top appointments in 2019 included Ann Miura-Ko ’98 B.S. as alumni trustee; Scott Strobel as provost; Nathaniel Nickerson as vice president for communications; Dr. Saad B. Omer as the first director of the Yale Institute for Global Health; David Wilkinson and Steven Berry as the inaugural executive director and faculty director of the Tobin Center for Economic Policy, respectively.

With $85 million, Yale intensifies its commitment to a premier and diverse faculty

The Faculty Excellence and Diversity Initiative has been renewed for another five years with a budget increase of 70% and the continued goal, in the words of President Peter Salovey, of “recruiting the most distinguished scholars, who will help diversify Yale, transform their fields, create knowledge to improve the world, and inspire our students to lead and serve all sectors of society.”

In addition, in keeping with the recommendations of the Yale University’s Institutional Responses and Resources on Racial Discrimination and Harassment, Kimberly Goff-Crews has been appointed to oversee the campus-wide Belonging at Yale initiative. The Yale vice president outlined her priorities in a Q&A with YaleNews.

The $100 million gift will enable the creation of innovative teaching and research programs devoted to strengthening the leadership of America’s public school systems.

The news that senior Marwan Safar had become Yale’s first Rhodes Scholar from the Syria, Jordan, Lebanon, and Palestine (SJLP) region was followed by the news that four Yale women from the United States had also won the coveted scholarship.

Yale also boasted national and international winners of Gates Cambridge Scholarships, a Truman Scholar, and Goldwater Scholars, as well as other winners of prestigious academic awards.

Geneticist Arthur L. Horwich of Yale and colleague F. Ulrich Hartl from the Max Planck Institute received their shared Breakthrough award, the richest prize in the sciences, at a November ceremony often called the “Oscars of Science.”

Other faculty recipients of major honors include two 2019 Pulitzer Prize winners, and recipients of a Grammy Award, a National Book Award, Presidential Early Career Awards for Scientists and Engineers, and National Institutes of Health Pioneer Awards