Slanted toilets are the logical extreme of hyperproductivity - EduBlog.News

Slanted toilets are the logical extreme of hyperproductivity 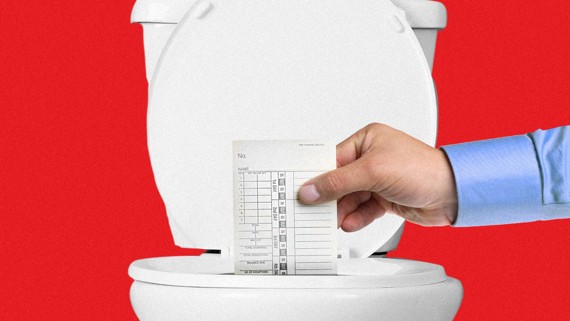 The toilet, as a technology, has been steadily improving. Indoor plumbing is far superior to chamber pots and outhouses, and automatic-flush sensors beat pulling a grimy handle manually. But a design concept that rapidly attained online notoriety this week brazenly suggested that the way to make toilets better is to make them worse.

The concept, called the StandardToilet, has a seat that’s set at an incline and lightly strains users’ legs, making it unpleasant to sit on for longer than five minutes  or so. The discomfort is intentional: The toilet gets people, especially workers, out of the bathroom (and off their phones) and back to whatever it is they’re supposed to be doing. To this end, according to the StandardToilet website, “the optimum angle of the gradient shall be between 11-13 degrees.” Its patent, though, covers everything from a gentle 5 degrees to a perilous 35, which would be like perching on a playground slide.

The makers of the StandardToilet declined a request for a phone interview, but explained to me over email that the toilet’s angled seat accomplishes two goals: On top of getting employees back to work in a timely manner, its design, the makers claim, reduces the risk of hemorrhoids. “We see it as a win/win situation for both employers and employees,” said a representative handling press inquiries.

Still, the toilet’s creator, Mahabir Gill, told Wired UK on Monday that the StandardToilet’s “main benefit is to the employers, not the employees. It saves the employer money.” StandardToilet contends that needlessly long bathroom breaks are costing employers billions of dollars each year. In addition to offices, the company’s website lists shopping malls, restaurants, and, curiously, “seaside resorts” as potential venues.

Read: The long lines for women’s bathrooms could be eliminated. Why haven’t they been?

It’s a bit difficult to say how seriously one should take this sinister toilet. Its stock-image-heavy, typo-laden website is almost charmingly shoddy. And its dystopian premise seems straight out of Nathan for You, a Comedy Central show in which the host convinces small-business owners to undertake harebrained promotional schemes. (In one episode, a gas station offers customers a generous rebate that can be redeemed if they solve a series of riddles on a mountain that’s more than an hour’s drive away.)

On the other hand, the StandardToilet has earned the approval of the British Toilet Association, a real organization. And StandardToilet told me that the product is real (though in an “early concept stage”), adding that that a few dozen American companies have expressed interest in it since word spread online. (StandardToilet says the names of these companies are “confidential.”)

If the interest is genuine, StandardToilet will likely have to confront some logistical issues. On a technical level, Christopher Chwedyk, a building-code consultant at the firm Burnham Nationwide, expressed concern that the sloped seat would pose problems with respect to managing “the flood-level rim of the fixture” (spillover) and “backflow” (when contaminated water seeps back into the clean-water supply).

A tilted toilet could be excessively burdensome for some people to use. “I imagine that the slanted seat would pose a problem to people with disabilities, the aging population, and children,” says Meghan Dufresne, an architect at the nonprofit Institute for Human Centered Design. “There will be people who have trouble moving or may need more time toileting who will be struggling.” (People who have digestive issues such as irritable bowel syndrome might also fall in that latter category.)

And that’s to say nothing of the disdain workers would likely feel for an employer manipulative enough to install a StandardToilet. The toilet seems just as likely to make people quit their jobs as it does to make them leave the bathroom sooner than planned.

When I asked Kathryn Anthony, an architecture professor at the University of Illinois at Urbana-Champaign and the author of Defined by Design, what she made of the toilet, she gamely tried to simulate the effect of using it by sitting on a rocking chair tipped forward for five minutes. “Even for just a few seconds it felt uncomfortable and jarring,” she wrote in an email. “After a minute or two it felt very painful behind the shins. After five minutes minutes it felt even worse, and I was pleased when time was up.”

However effective the toilet may be at shooing away its users, it endorses a blinkered notion of productivity. “The single most important element in being productive in a knowledge-worker landscape is having time to think more deeply,” says Charles Duhigg, the author of Smarter Faster Better: The Secrets of Being Productive in Life and Business, who has written for The Atlantic. He notes that the StandardToilet runs counter to some conditions that promote this sort of deep thinking, such as “being in a comfortable physical environment” and “being away from distractions.”

Perhaps in a workplace where people are performing physical work, someone could make slightly more of a business case for the deployment of the StandardToilet; there, bathroom breaks have more potential to be a productivity drain. Even so, Duhigg says, “there’s no company on the face of the planet that’s like, ‘The best cost savings we can get is by making it unpleasant to sit on the toilet.’” (Maybe the StandardToilet will end up installed in busy public restrooms—places where efficiency is measured in how quickly people can cycle in and out.)

That said, some employers have in fact thought along these lines. Five years ago, CNBC published a story about workers at a faucet manufacturer in Chicago who faced possible penalties if their bathroom usage outside of regular breaks exceeded one hour in a 10-day period. (The company didn’t confirm the existence of such a policy at the time, but its owner did publicly lament the 120 hours of productivity he lost to bathroom breaks over the course of a month.) More recently, in Scotland, a labor contract for call-center workers was reported to include a provision capping time spent in the bathroom at 1 percent of the length of the workday. (The company insisted to the press that it adhered to all employment laws.)

Draconian policies like these are far from the norm, and bathroom breaks, on top of being a matter of basic dignity, are considered by many workers to be a treasured feature of office life. Sure, some people probably waste time on the toilet, but they might be, on net, economically productive. Duhigg told me that an ideal break from heavy concentration is something that isn’t cognitively demanding—like a bathroom break. He told me, “I know that I’ve had a number of good ideas that have come to me while I was walking to or in a bathroom.”