Search for this author in: 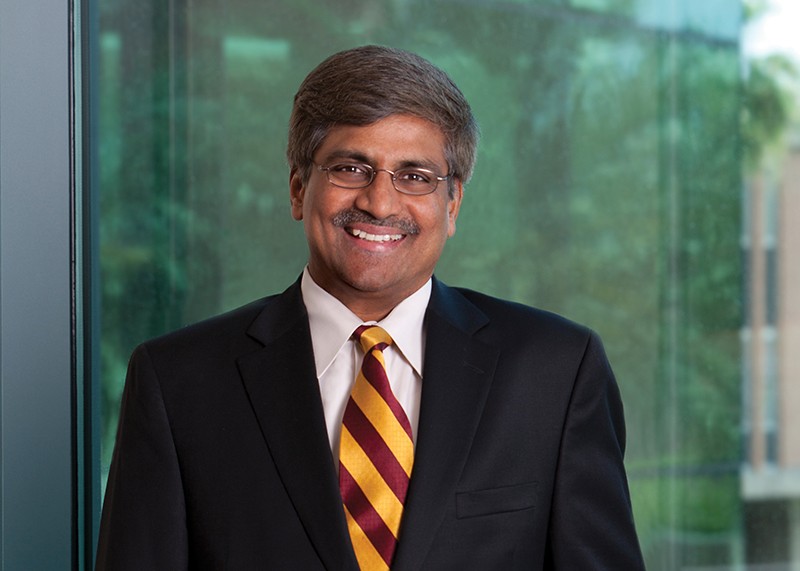 US President Donald Trump has chosen Sethuraman Panchanathan, a computer scientist and vice-president at Arizona State University in Tempe, to be the next head of the National Science Foundation (NSF).

The president also tapped Neil Jacobs, the acting head of the National Oceanic and Atmospheric Administration (NOAA), to run that agency on a permanent basis. Jacobs, an atmospheric scientist who formerly worked in industry, has been temporarily in charge at NOAA since February. The agency has not had a permanent chief since Trump took office in January 2017.

Both nominees need to be confirmed by the Senate before they can take office.

At the NSF, Panchanathan would succeed France Córdova, an astrophysicist who has headed the agency since 2014. Her six-year term expires in 2020.

“Dr. Panchanathan′s commitment, creativity, and deep insights will be instrumental in leading the National Science Foundation on its continued path of exploration and discovery,” said Kelvin Droegemeier, Trump′s science adviser and the head of the White House Office of Science and Technology Policy, in a statement.

The nominee said he was “humbled and honored” to be chosen, according to a statement.

All hands on deck

Panchanathan — known as ‘Panch’ — has served on the National Science Board, which oversees the NSF, since 2014. He holds several leadership positions at Arizona State University, including chief research and innovation officer.

His research has focused on the interface between people and computers, including developing assistive technologies such as haptic computing. He has also published more broadly on innovation in higher education and across society.

“Panch is going to be an enormous asset for America,” says Elizabeth Cantwell, senior vice-president for research and innovation at the University of Arizona in Tucson. “He’s got boundless energy combined with a keen intellect.”

“I can′t think of a better choice for the NSF directorship right now,” says Edward Hackett, who is vice provost for research at Brandeis University in Waltham, Massachusetts, and worked with Panchanathan at Arizona State. “He′s wonderfully equipped to handle it — he′s demanding but he’s warm, engaged, quick-minded and broad in his perspective.”

Hackett remembers working with Panchanathan several years ago on a proposal to re-locate a research centre to Arizona State. As part of the pitch, Panchanathan taught himself details of one of the proposal components and gave the talk, rather than delegating it to someone else. “He was going to be certain it was done and it was going to be done well,” says Hackett. “He was willing to get into the trenches.”

Jacobs′s nomination to lead NOAA comes at a delicate time for the agency. Last month, Trump’s original choice for agency head — AccuWeather co-founder Barry Myers — withdrew from consideration, citing health reasons. Myers′s nomination had stalled in the Senate for more than two years without a vote.

Jacobs came to NOAA in February 2018 from Panasonic Avionics Corporation in Lake Forest, California, where he was the chief atmospheric scientist and worked on weather observations and forecasting. He served as NOAA′s assistant secretary for environmental observation and prediction until February of this year, when he replaced acting administrator Timothy Gallaudet in a sudden leadership shake-up.

Jacobs′s short tenure has already seen him embroiled in controversy. In September, as Hurricane Dorian approached the eastern United States, Trump tweeted that the storm was poised to make landfall in Alabama — contradicting forecasts from NOAA’s National Weather Service. The president later doubled down on his claim, displaying a map that seemed to have been clumsily altered with a Sharpie marker, and NOAA released an unsigned statement that seemed to criticize its own forecasters.

The episode, known popularly as ‘Sharpiegate’, has spawned investigations by the inspector general of the Commerce Department, of which NOAA is a part, and Congress.

An essential round-up of science news, opinion and analysis, delivered to your inbox every weekday.