One hundred and ten years ago, today, might have been the first soccer match at the University of Illinois, which was later followed by a variety of future teams who would organize on campus, bringing together citizens, immigrants, international students, residents, and the local community too.

Read on to learn more about the early soccer at the University of Illinois!

Before soccer came to Illinois, the sport’s popularity was growing on other university campuses, including Princeton playing regional teams, Cornell being invited to play in Brazil, and Wisconsin considering forming a team, to a name a few. But it wasn’t long later when matches were held on campus.

On November 6, 1909, two teams composed of Illinois international students (and Cosmopolitan Club members) played an opening “curtain raiser” soccer match, introducing the campus to the sport, before the football game between Illinois and Indiana. 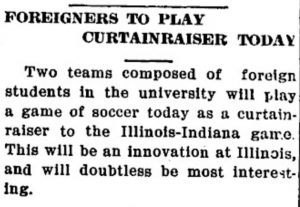 The soccer match was well received, and during the following semester, the Board of Control of the Athletic Association consented to officially recognize soccer as a sport at Illinois and to form a team for the following school year. 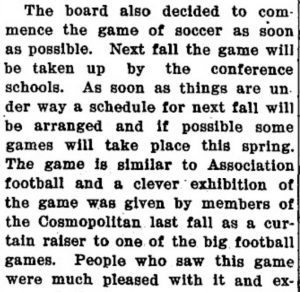 A 1910 Daily Illini article including a review for the first documented campus soccer match, found in Record Series 41/8/801.

By both coincidence and luck, former YMCA director, experienced soccer player, and Lebanese Illini, Mr. Shukry El-Aswad, (Civil Engineering, 1909-1910), of Brummana, Lebanon, was already on campus, and he was an early appointment to the team in January 1910. As the first soccer coach, Mr. El-Aswad trained the 11-member team in both the University gym and on the south campus. 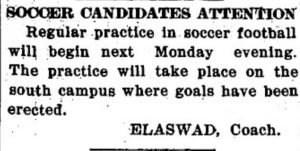 Coming the day after the election of team captain, it would April 27, 1910, at Illinois Field, where the team’s first match would take place, and they competed against Christian Brother’s College of St. Louis. Admission was free, it was reported, to maximize attendance. Led by Captain Andrew S. Karkow, (B.S. Civil Engineering, 1911), of Chicago, the team did lose 2-9; however, those in attendance recognized the team’s impressive performance given their recent organization and limited pre-game training opportunities. In May, in another blow to the team, Mr. El-Aswad withdrew from the university to continue his studies at Columbia University.

In a Western Intercollegiate Magazine article by George Morris, which includes a group photo of the 1910 Spring Team, the author gives a full account of the game, including estimating an attendance of about 800 while conceding that some in attendance may have preferred football. The author also highlighted the multicultural and international composition of the team, as he wrote:

In September 1910, the Daily Illini reported, team manager Harry Young Carson, (B.S. Municipal and Sanitary Engineering, 1911), of Danville, would continue to lead the team into the following school year. After Mr. El-Aswad transferred schools, the new team coach was former English professional player, for teams in Bristol and London, before relocating to Champaign, and then local resident Mr. William S. Strode. Tryouts and practice resumed by the end of the month. 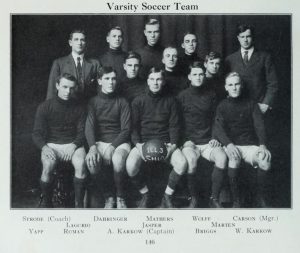 The Fall 1910 Team would play a variety of teams. The first match was an away game against Christian Brothers College in St. Louis, on October 29. While the previous team had many international students, the new team had many Illinois residents, the Daily Illini reported. Unfortunately, the new team did lose 0-5. On November 5, they played an away game against the University of Chicago team and Illinois won 3-0. On November 12, the Chicago team would come to campus and following a recently successful practice Illinois was feeling confident. The Saturday afternoon game was the first inter-university and first conference soccer game at Illinois Field, the Daily Illini reported, and Illinois would win 6-1. In December, citing a successful fall season, the team was given jerseys from the Athletic Board. In March 1911, a spring season was announced with anticipation. That same month, in a Western Intercollegiate Magazine article, by team manager Harry Y. Carson, the author describes the growing interest in soccer in the Midwest and uses Illinois as an example. A home game against the Hyde Park Blues, of Chicago, was scheduled for May 13. For this particular game, while Coach Strode was permitted to play as a center forward, the team lost 2-10. Despite the loss, Illinois was commended for its performance. Unfortunately, following that match, citing difficulties between the players and coach, remaining practices were cancelled for the season.

The next season began with the May election of captain Leslie E. Mathers, (B.S. Agriculture, 1913), while practice began in September with as many as 40 students at tryouts. Unfortunately, also in September, plans for a soccer league had fallen through, resulting in less matches for the Illinois team. Fortunately, for the soccer advocates in the U.S., following a visit of campus, the 10th Marquess of Queensberry Percy Douglas, praised the University of Illinois and he endorsed soccer as an alternative to football in the U.S. 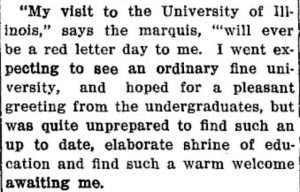 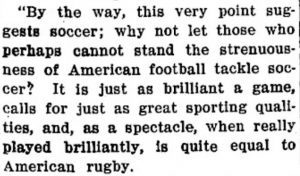 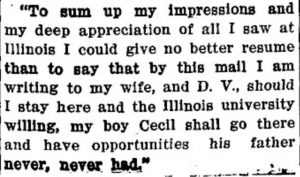 Ultimately, for the fall season, Illinois was unable to compete, as planned, against Christian Brothers College, Chicago, and Elmhurst College. While there were initial plans for the home game against Chicago to be scheduled during Homecoming weekend, on Friday, November 24, the season looked uncertain. In late October, it was reported that there was no fall team for Indiana and Chicago might not have had enough eligible players. Unfortunately, the worst had happened and the Illinois team disbanded because there were no teams to play. In an editorial in The Daily Illini, titled “Athletics for Its Own Sake”, the author recounted the history of the team and the soccer movement, argued that rather than allowing a competitive intercollegiate team dissolve, energy should be put into sustainable sports programs, like intramural leagues, which would have larger pools of eligible student participants. In the November 1911 issue of Illinois Magazine, thinking ahead to homecoming weekend, while pointedly referencing the homecoming soccer game, the soccer team, and the soccer league’s demise as to have “…disappeared like snow before an April sun…”, University president Edmund J. James raised the question to all Illini of what they wanted the future of intercollegiate athletics to be in their education. [1] 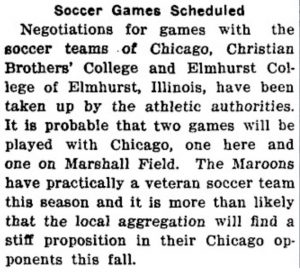 A 1911 Daily Illini announcement about the proposed soccer season, found in Record Series 41/8/801. 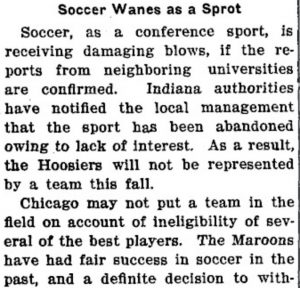 A 1911 Daily Illini announcement about the threatened soccer season, found in Record Series 41/8/801. 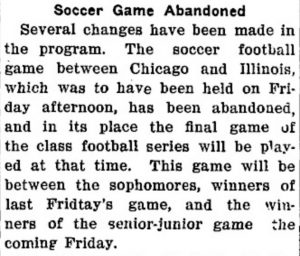 A 1911 Daily Illini announcement about the cancelled soccer season, found in Record Series 41/8/801.

Starting with cosmopolitan students and staff, before becoming supported by athletics administrators, educators, and faculty, early soccer at Illinois emerged as an enthusiastic project bringing diverse people together through physical activity and friendly competition. Although the first soccer movement might not have lasted as long as anticipated, it would return again before the end of the decade. 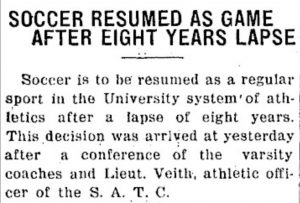 A 1918 Daily Illini announcement for the renewed soccer program, found in Record Series 41/8/801.

Got something to donate to the story so far? We’d like to hear from you! Please send us a message, leave a comment below, or contact us through social media. We and our readers would like to read about it.

[] As always, a special thank you to all students and staff whose tireless work for student life and publications (many of which are available at the University Archives) help preserve the memories of Illini everywhere.

[1] In the same issue, Dean of Students Thomas Arkle Clark would argue that “college spirit” could transcend sports team pride and be a gradually awakening mature, meditative relationship between alumni and their school. See: “College Spirit” in Illinois Magazine, pages 79-85.