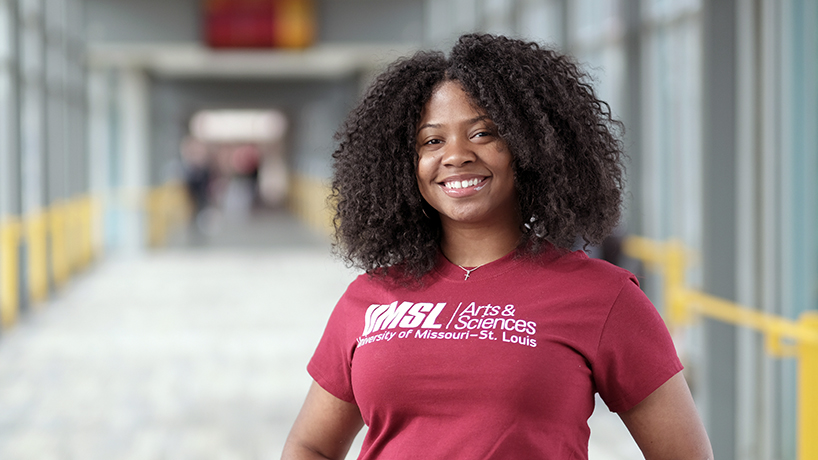 Communication major Taylor Milon’s time at UMSL was marked by her passion for service and campus involvement. She graduated in December as after having been a a fitness attendant, Associated Black Collegians secretary, Millennium Student Center senior student program manager, UMSL Ambassador, writer and photographer for The Current and more. (Photo by August Jennewein)

Taylor Milon didn’t grow up in the Little Miss pageant circle. She never pictured herself in a ballgown, competing for a title.

Yet, in April 2018, the University of Missouri–St. Louis now-alumna found herself onstage during the talent segment for the Alpha Phi Alpha Fraternity Inc. Alpha Eta Chapter Miss Black and Gold Scholarship Pageant, vying for the top spot. A movie fan, she decided to base her segment on “Miss Congeniality.”

No, not the water glasses.

“I did self-defense,” the communication major said. “I didn’t know what my talent was going to be. It wasn’t like I could sing or dance, and I wanted to be innovative. I tossed someone over my back. I did the exact same moves that she did in the movie, like when she hit him – pow, pow, pow. I forgot what it was called ­– I think it was SING ­– so you elbow them, hit them in the nose, and then you hit them in the groin. I did that whole thing on stage, and they ate it up.”

Milon tied the narrative around her talent into April’s Sexual Assault Awareness Month and created a pamphlet with all her self-defense moves for the judges. Her creativity paid off, and they named Milon both Miss Black and Gold, awarding her a scholarship of $1,000, and Miss Gold for raising the most in ad sales for the pageant program book.

“Looking back, it really shaped my perspective moving forward for everything else that I want to pursue because I saw what could happen when I am serious,” Milon said. “I went to all the practices. I was on time and prepared. God gave me everything that I needed.”

Milon was introduced to the pageant by helping a friend, Kristin Norman, who’d participated in 2016, and with Alpha Phi Alpha because of LaVell Monger, then-president of the Associated Black Collegians and part of the fraternity. From there, Milon’s involvement on campus began to grow.

When Milon graduated in December, she might have been one of the most-involved students to walk across the commencement stage. During her time at UMSL, Milon has been a fitness attendant, Associated Black Collegians secretary, Millennium Student Center senior student program manager, UMSL Ambassador and more.

What connected Milon to all those opportunities were people, and she can rattle their names off without pause: Director of the Office of Multicultural Student Services Derrick Freeman, UMSL Vice Provost for Enrollment Management Alan Byrd, Senior Support Specialist of Executive Events Kim Sletten and on and on. But the first person who got Milon involved at UMSL was her 2-year-older sister Tabitha.

“She paved the way for me,” Milon said. “She took me under her wing. We used to come here during the summertime, and she would work in the library. I remember thinking UMSL was so huge. The rec was about to open, and they needed workers. I applied, and she applied, we both got it. It was my first job and I got it before I even came on campus, so I got to move in early. It was amazing. It was so much fun.”

The two volunteered together with UMSL Students of Service for the annual MLK Day of Service. That introduced Milon to Alternative Spring Break, an event where UMSL students travel to various communities to give back.

Milon’s group went to Memphis, Tennessee, where they helped at a local produce farm, read with children, cleaned out pools, and learned about the similarities between the community there and St. Louis.

Milon enjoyed volunteering with Students of Service so much she became special projects chair to the board in 2017 at the urging of Associate Director of Student Involvement Ashlee Roberts and her then-graduate assistant Demetrius Reynolds. During her three-year stint, Milon worked on projects such as Holiday Fest and Trunk or Treat, which serves approximately 400 area children.

While interviewing potential replacements for herself in December, Milon got to thinking what made service special to her.

“I was telling them that I love the story of it all,” she said. “I work with nonprofits or community leaders. They tell us, ‘This is the need. This is what we’re doing. This is a goal. This is how we’re doing it. This is the impact that we’re making.’ There’s not always a concrete before-and-after part of service, but I like being involved and engaged in helping implement those steps to make that difference.”

Milon has a way of appreciating narrative in all aspects of her life.

That’s what brought her to UMSL’s student newspaper, The Current. She joined during her freshman year as a photographer, getting to take a photograph of the Ben Cohen and Jerry Greenfield of ice-cream fame. In her senior year, she started writing for the paper and serving as opinions editor. The experience reinforced her love for writing.

“You get to know things that you didn’t know,” she explained. “What you are able to learn is limitless. I feel writing is special because writing is – it sounds so cliché – but it’s literally like magic. When you read these words, it creates this image in your mind, and then you get to transcend to this place, this whole new world.”

That ties in with the academic side of Milon’s UMSL time.

She was inspired by the film “What Women Want,” where Mel Gibson’s character pitched products as a marketing branding manager, to take some business classes and then decided to focus on communication, graduating with a BA and a minor in business. She got hands-on experience as a script writer and host/producer for UMSL Student Electronic Media Production-UTV.

“Communication and media go hand in hand,” she said. “I’m learning that more and more.”

Milon hopes to use those skills as a freelance writer and photographer in the near future. Currently, she’s doing social media and marketing for her friend Chris Walters’ Inclusion Podcast and working as a committee member on the Active Advocacy Coalition Conference, which partners with The Scholarship Foundation of St. Louis and St. Louis Graduates to inform students about higher education policies.

She’ll also be investigating a long held but unexplored interest in skin care in a 22-week esthetician program at the Grabber School Hair Design.

Regardless of where Milon ultimately ends up, some things will stay the same.

“I am taking it one step at a time,” she said. “I’m going to make sure that I stay active in my roots, like civil engagement and advocacy. The main thing about my time at UMSL was the relationships forged with all these different people who inspired me, helped and propelled me. They really helped me find a home.”