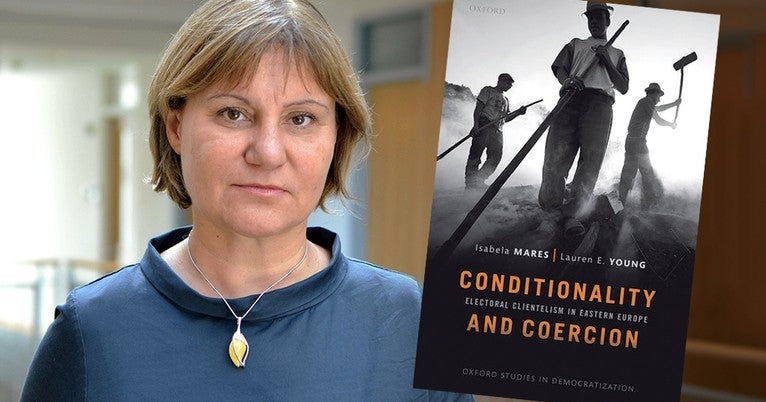 Imagine entering a polling place on Election Day concerned that local government officials or your employer will punish you for supporting the wrong candidate. This is a dilemma facing voters in Hungary and Romania, according to Yale political scientist Isabela Mares.

Mares, the Arnold Wolfers Professor of Political Science, conducted an intensive multi-year investigation of political clientelism — illegal exchanges of goods and services for political support — in several Eastern European nations. Her research combined ethnography, an observational method used in anthropology for studying cultures in depth, with a variety of survey experiments. She describes her findings in “Conditionality and Coercion,” a new book coauthored with Lauren Young, an assistant professor of political science at the University of California-Davis.

Mares recently spoke to YaleNews about the work. Interview condensed and edited.

What types of illicit election strategies did you investigate?

Most efforts to address clientelism have focused on vote buying, which is the exchange of money and goods for political support. We demonstrate that only addressing vote buying overlooks a wide range of corrupt strategies that political actors employ to control voters. We found that political brokers in both Hungary and Romania use public policies and state resources to coerce or encourage support at the ballot box. Why would politicians rely on vote buying, which is financed though the party or from their own pockets, when they can use state-funded policies like welfare benefits to pressure voters?

We studied the mix and substitution between these strategies. Who’s using state resources? Who’s using private resources, such as politicizing private employers to coerce their workers into supporting a specific candidate or party? How does the mix vary across localities and parties? We distinguished between coercion and positive inducements — threats and punishments versus offers of goods and services. What are the conditions when one or the other is more likely to occur?

How do politicians in Hungary and Romania use public resources to secure political support?

The use of state resources comes in two forms: using public policies like welfare programs and using state intermediaries as brokers. It’s not just the use of government benefits we looked at, but who is used to execute these campaigns to target voters and to ensure that voters comply with political inducements.

In the initial post-communist context during the early 1990s, the state was essentially up for sale and everything was politicized. In the current context, the amount of public resources available to politicize is much smaller than during the post-communist transition. The politicians have to do more with less, which is why workfare benefits have become very important. In de-industrialized settings with few employment opportunities, these workfare benefits are the only source of long-term income for voters.

Voters are reminded every time they interact with the local government that their political support is expected and that their votes are monitored.

Distribution of those benefits is completely controlled by the mayors, who serve as quasi-feudal lords. Their constituents are completely dependent on them for these resources. It was surprising to see the creation of such relationships of long-term political and economic dependence 30 years after the fall of communism.

The receipt of welfare benefits is conditioned on political loyalty. Between elections, mayors and employees of the local administration cultivate and shape expectations of political reciprocity. Voters are reminded every time they interact with the local government that their political support is expected and that their votes are monitored.

We worked with anthropologists to better understand how the relationships between local political brokers and voters are structured. It’s not clear whether voters are monitored at the time they cast their ballots, but it is quite clear that many people believe their vote is being monitored. On one of our surveys, we included a question asking whether respondents believed their ballot was secret. In Romania, only 50% of respondents believed it was. That’s important. Political parties manipulate people’s disbelief in ballot secrecy. The mayors and employees of the local administration create and reinforce the expectation that they will know how people vote.

What do the parties do to reinforce that expectation?

They deploy local government officials, who interact with people between elections, to convince people that their votes are monitored. At the same time, those officials are trying to discern how people voted. It’s based on belief more than genuine monitoring, but it is important to understand that parties invest a lot of time and resources into this activity. We’ve documented many instances of brokers and voters describing these efforts. We also saw similar activity conducted through private employers and other private intermediaries, such as moneylenders. It makes people believe that their jobs or financial wellbeing depends on how they vote.

You also examined why voters allow corruption to go unpunished. What did you find?

The standard explanation in political science is that voters are just not well informed about political corruption. It’s a myth. We tested it through a conjoint survey experiment where we asked voters to choose between two candidates who varied in terms of party, occupation, gender, experience, and so on. We also included various attributes associated with corruption and clientelism. We found that voters often expressed a preference for the candidate who used illicit strategies.

People often understand corruption as a signal of competence or evidence of a preferred policy position, such as concern for the poor. As a result, voters don’t punish corrupt behavior and sometimes they reward it.

Getting voters and politicians to be forthright about illicit electoral corruption must be difficult. What methods did you develop to collect data?

I think we provide a complete picture thanks to our combination of ethnography, which we don’t do often in political science, and various kinds of survey experiments. It allowed us to develop our hypotheses in the field because we could devise surveys to test the observations that the anthropologists collected from the political brokers.

We conducted focus groups and multiple pre-tests before we fielded surveys on how voters evaluate corruption. You can’t just use an instrument developed here at Yale. It has to be fine tuned with work in the field.

How did you approach the ethnographic component?

We worked with teams of anthropologists, who stayed in the localities over long periods of time. They conducted several hundred interviews with voters, brokers, and local politicians. We protect their anonymity. We discovered that once the mayors in these places know and trust you, they open up.

Our study has, I think, two policy implications. First, we point out that opportunities exist for political brokers to switch from one illicit strategy to another. If policies address one strategy, such as vote buying, the brokers likely will adopt another strategy. Second, we emphasize the politicization of state resources as the main source of electoral clientelism. The quasi-feudal system that the political parties have developed must be eliminated. We need to restrict the ability of local officials to control these large and important workfare programs. Clearly, the parties in both countries lack the incentive to do this.

Does your research have a broader reach beyond these two countries?

Yes, this is not just about Eastern Europe. While our results show the sources of corruption and clientelism are local, we study a very general problem that is happening in different regions across the globe. I hope researchers will replicate our work in Latin America and Africa using a similar framework of ethnography and field experiments. We are also eager to understand when and why candidates use private or public intermediaries to influence voters’ choices. Our study provides a general framework for the understanding of these political phenomena.