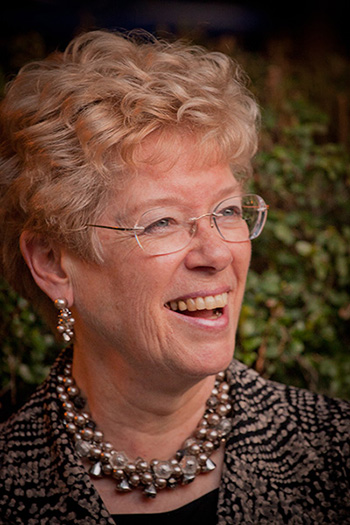 The Royal Astronomical Society has awarded its Gold Medal in Astronomy to Sandra Faber, professor emerita of astronomy and astrophysics at UC Santa Cruz.

The award recognizes Faber “for her outstanding research on the formation, structure and evolution of galaxies, and for her contributions to the optical design of the Keck Telescopes and other novel astronomical instruments.”

The Gold Medal is the Royal Astronomical Society’s highest award, often given in recognition of a lifetime’s work. Previous recipients include Albert Einstein, Edwin Hubble, Steven Hawking, Vera Rubin, and Donald Osterbrock, a UCSC astronomer who received the award in 1997.

Faber is one of the leaders world-wide in the study of galaxies, with an enduring legacy of contributions across a wide range of topics in galaxy structure, galaxy evolution, and cosmology.

In 1976 she discovered, with Robert Jackson, a relation (known as the Faber-Jackson relation) between the central velocity dispersion of stars in elliptical galaxies and the mass of the galaxy. In 1979 she wrote an influential review article with John S. Gallagher that is widely regarded as a turning point in the debate about the importance of dark matter in the universe.

Faber was an early pioneer (together with George Blumenthal and Joel Primack at UCSC and Martin Rees at Cambridge) in developing a model of galaxy formation based on cold dark matter, which now underpins our current understanding of galaxy and cluster formation.

She has played important roles in a remarkable number of collaborative programs that have led to further breakthroughs, including the discovery of a mass concentration responsible for large-scale flows in the nearby universe (the ‘Great Attractor’). With Douglas Richstone, she led the team that used the Hubble Space Telescope (HST) to identify a correlation between black hole mass and the velocity dispersion of stars in the host galaxy bulge.

Faber contributed to the optical design of the Keck Telescopes and led the construction of the multi-object DEIMOS spectrograph for the Keck. She and Jon Holtzman played a major role in diagnosing Hubble’s optical flaw and executing the subsequent repair. With Henry Ferguson, she led the CANDELS deep imaging survey of distant galaxies with HST, the largest project in the history of the mission.

Faber joined the faculty at UC Santa Cruz in 1972 and in 1995 was made University Professor, the highest honor for faculty in the UC system. She received the National Medal of Science in 2013, the Gruber Cosmology Prize in 2017, and the American Philosophical Society’s Magellanic Premium Medal in 2019, among many other awards and honors in recognition of her accomplishments.