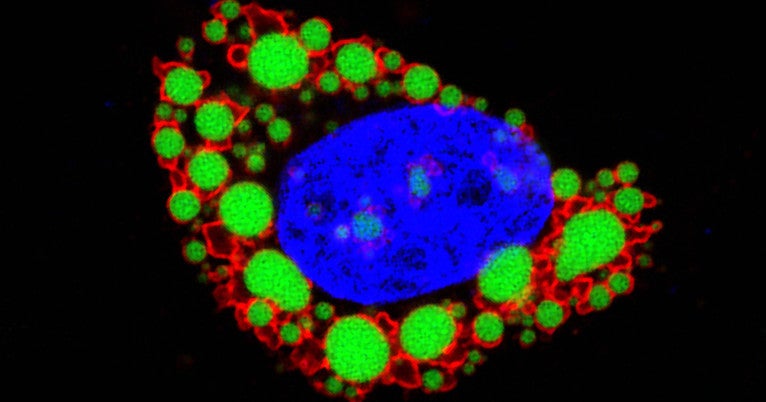 Fat cells are filled with droplets coated by molecules that act like hotel doormen: These “doormen” control cellular access for nutrients as well as for the exit of energy-supplying molecules called lipids. In healthy individuals, outgoing and incoming traffic in fat cells is finely balanced, supplying energy while preventing excessive spread of undesirable fat in the belly.

But in obese individuals, these cellular doormen have opened the gates far too wide in certain key fat cells, known as visceral fat cells, letting in too many carbohydrates without first burning off lipids. This leads to a ballooning of the size of visceral fat cells in the belly.

Obesity is linked to increased risk of heart disease, diabetes, and chronic liver disease, as well as other disorders.

Yale researchers report Jan. 10 in the journal Nature Communications that they have found the molecular regulator of this fat droplet doorman, and potential new treatments for obesity based on restoring healthy balance found in lean individuals.

The regulator, or commander, of these fat droplet sentinels is an enzyme called O-GlcNAc transferase (OGT), according to the research team. Mice lacking the enzyme are lean, exhibit a dramatic reduction in the size of fat cells and tend to burn off lipids first rather than taking in more carbohydrate fuel.

Conversely, the overexpression of OGT in mice triggers obesity by increasing intake of carbohydrates without burning off excess lipids.

“The commander of this doorman makes it easier for nutrients to get in, but harder for lipids to get out,” said senior author Xiaoyong Yang, associate professor of comparative medicine and of cellular & molecular physiology at Yale University School of Medicine.

In previous studies, Yang’s team found that overexpression of OGT in fat cells has another side effect — it signals the brain to consume more calories (essentially asking the brain to order another pizza).

Yale’s Yunfan Yang is first author of the study, which was primarily funded by the National Institutes of Health.