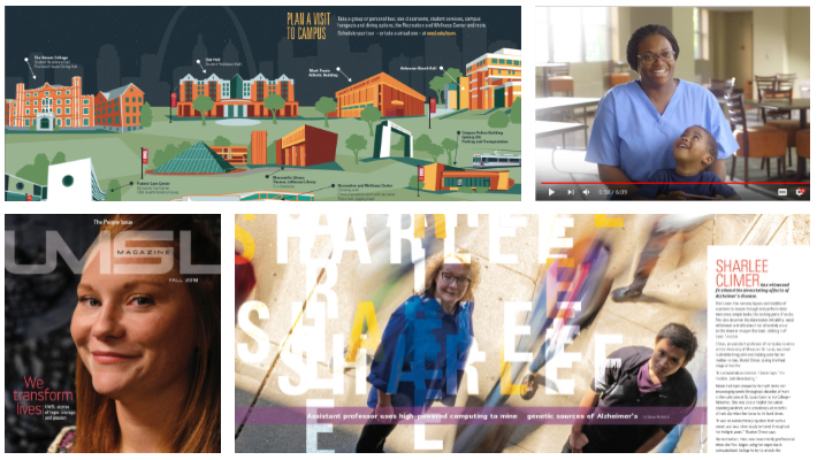 For the Marketing and Communications team at the University of Missouri–St. Louis, it’s all about the spotlight. Instead of basking in the glow themselves, writers and designers highlight the achievements of students, faculty, staff and alumni in videos, brochures, blog posts and UMSL Magazine.

But the small department is getting a chance to stand and be recognized after winning eight awards from the Council for Advancement and Support of Education. 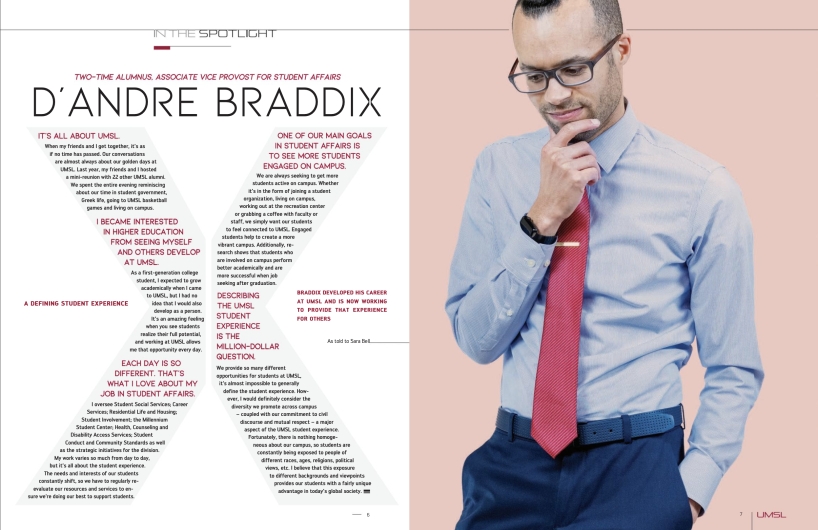 Wendy Allison’s design for this article, featured in the spring 2019 issue of UMSL Magazine, received a silver CASE Award for editorial design.

The biggest win went to one of the team’s largest projects: UMSL Magazine. Writers, designers and a photographer invest untold hours each semester to create the semiannual publication. The fall 2018 edition, titled “We Transform Lives: UMSL Stories of Hope, Courage and Passion,” showcased the university’s mission in action with stories of 17 people whose lives were affected by UMSL and who are impacting others in St. Louis and beyond. It won gold in the college and university general interest magazines category.

“It’s nice to have our work recognized,” said Jessica Rogen, current UMSL Magazine editor. “The magazine represents the collaborative efforts of our combined team. We’re working for a really good mission – bringing education to the St. Louis community and beyond.” 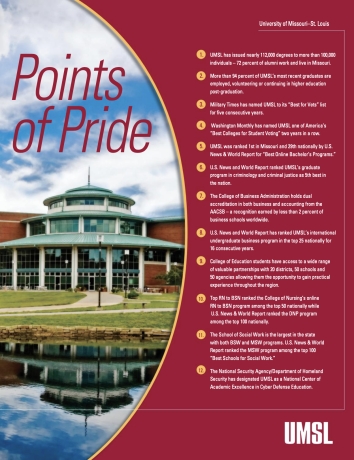 This travel display, created by Joan Barnidge and Jami Hirsch, was part of an updated look for UMSL Admissions’ recruitment materials. The new design won a silver CASE award in the student recruitment publication packages category.

“We rebranded everything for Admissions so they’d all have a really consistent look,” Barnidge said. “We started with a brainstorming session, and we brought in things we liked. We had the board covered in examples, and we said, ‘This would work for that, and this would work for that.’ Then we UMSL-ized what we liked, a version that reflected the university.”

Barnidge’s work garnered a second silver award in the illustrations category. The winning piece was an illustrated map featuring the main buildings on campus.

“I was most excited about the map,” she said. “We’ve always had a traditional map, but I was able to bring my individual illustration skills. The CASE Awards confirm we exceeded expectations.”

The design team was also represented by Allison, whose UMSL Magazine designs won silver and bronze awards. The silver award in editorial design recognized a spring 2019 article titled “D’Andre Braddix: In the Spotlight.” The bronze award in the same category was for a fall 2018 spread featuring Assistant Professor Sharlee Climer.

“Staff members can be the hidden gems at a university,” Rogen said. “They really make things happen, but they’re not what you think of. When you think of a university, you think of faculty and students. We had written a bunch of very powerful stories about people who are trying really hard and improving the lives of people at the university and in the community and often aren’t recognized. It was an obvious thing to put together.”

The final two CASE Awards were for videos. A bronze winner for short recruitment videos featured the Pierre Laclede Honors College, highlighting honors students and what they gain from the program. Cary Goldwasser and Hirsch served as producers.

Another video produced by Hirsch took home bronze in the long general information videos category. Showcasing how UMSL transforms lives, the video featured successful alumni describing how the university put them on the path to success.

For the Marketing and Communications team, it’s all about growth. To Rogen, that means continually striving to improve.

“We have a really well-done magazine, and I want to build on that,” she said. “I want it to reflect the day-to-day of the university, so people who have graduated can remain connected and find parts from their own experience when they pick it up. I feel good about coming in and putting my effort here.”