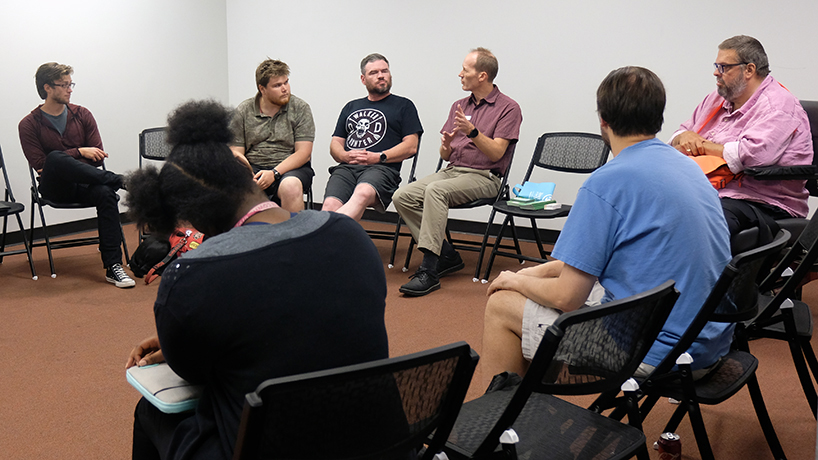 Students from different walks of life gather last fall for a meeting of the Able-Disable Partnership. The organization, led by co-president Jacob Brandt (at left), aims to create a more inclusive environment for students with disabilities. (Photos by August Jennewein)

Jacob Smith allowed himself a brief moment to marvel at the turnout when the Able-Disable Partnership gathered for its first meeting of the 2019-20 academic year.

Only one or two chairs remained unfilled as a group of 30-some people packed into the small meeting room on the third floor of the Millennium Student Center at the University of Missouri–St. Louis.

There were men and women, students of different races and ethnic backgrounds – all inspired by the chance to raise awareness of people with physical as well as intellectual and developmental disabilities and advocate for ways to improve their experiences on campus.

“It’s been pretty amazing,” Smith says. “There was a time when this was just an idea in my head.” 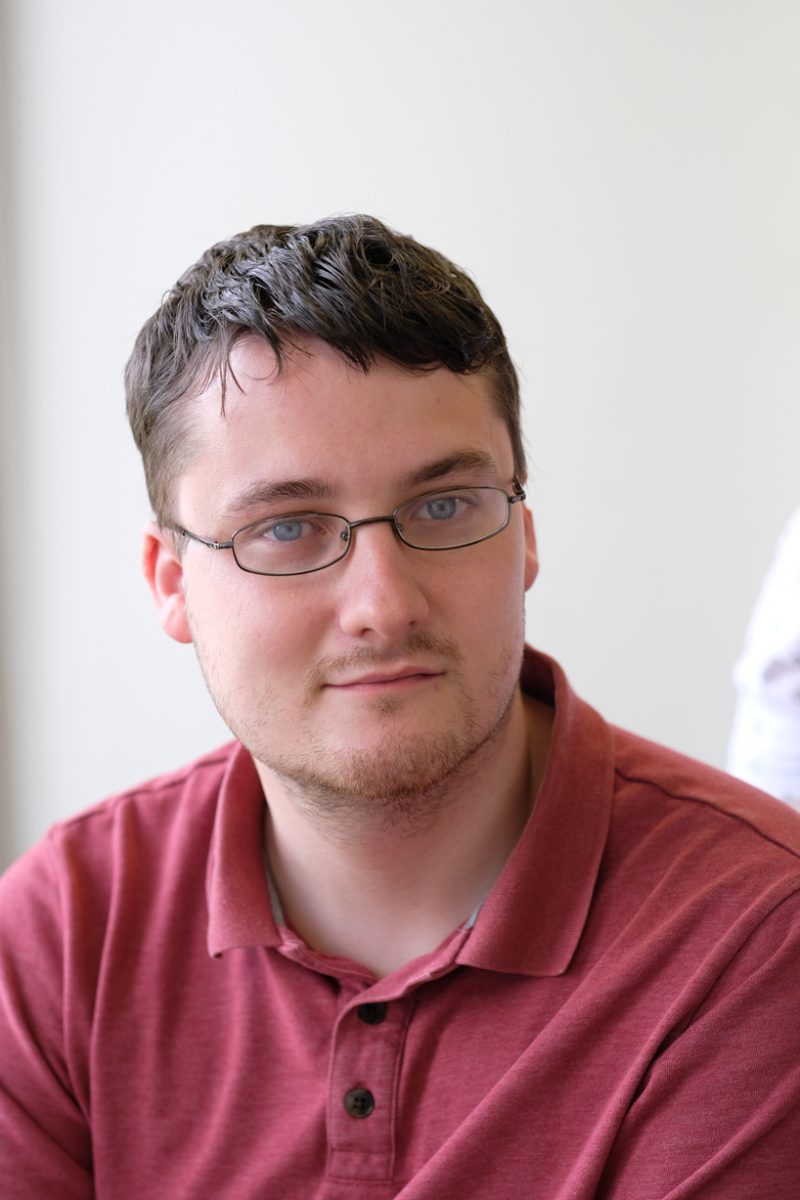 Able-Disable Partnership co-founder Jacob Smith received the Student Advocate of the Year Award last year for his work on behalf of students with disabilities.

About a year earlier, Smith, a triple major in psychology, history and secondary education, joined the Student Government Association as a means of getting involved. The Jefferson College transfer was meeting with Myrina Otey, then the SGA’s student director of diversity and inclusion, and they were discussing ways UMSL could be more inclusive for racial and ethnic minorities as well as LGBTQ+ members of the campus community. Smith urged her to also give a voice to students with disabilities.

There currently are 420 students at UMSL registered to receive accommodations from Disability Access Services, though the number of students with disabilities is almost certainly higher because not all disabilities are reported.

Smith remembers Otey asking him if there was a student organization devoted to disability issues. When he answered that there wasn’t, she told him he should start one.

That set the process in motion.

Smith had been challenged by his own disability – autism – throughout his life. At the time, he was volunteering with UMSL SUCCEED, the post-secondary program for students with intellectual and developmental disabilities. He felt motivated to try to make a difference.

He met Luke Barber through the SUCCEED program and asked if Barber, a dual major in public policy and administration and social work, would like to help develop a disability-focused student organization.

Barber had participated in the Missouri Developmental Disability Council’s Partners in Policymaking program in 2018 and was eager to join the effort. It was his idea to call it the Able-Disable Partnership.

Jacob Brandt, a computer science major who’d befriended Smith while at Jefferson College, also got involved as the partnership was getting off the ground. So, too, did Kevin Hill, a business major who’d led an earlier effort to create such an organization.

They only needed to gather six more signatures from interested students before they could petition to become an officially recognized student organization. They won approval in January with Associate Teaching Professor Leighanne Heisel from the Department of Communication and Media and Assistant Professor Lauren Obermark from the Department of English serving as their faculty advisors.

Smith’s original vision for the partnership was to generate broad awareness for disability issues, and the organization has hosted a series of forums starting last spring on visual impairment and autism.

But he and his co-founders have also seen specific areas where UMSL can improve to meet the latest Americans with Disabilities Act standards and become a more welcoming place for students with disabilities.

“This group has definitely opened people’s eyes,” Brandt said. “A year ago, I wasn’t very big in the disability access stuff at all, and now I’ve become a huge advocate. The more I saw, the more I immersed myself with this diverse group of people, I saw the problems that are in place. When we talk to people, they just go, ‘You know what? You’ve got a point there. I never thought about that. I never considered that.’”

Last semester, Brandt and fellow student Maxwell Agbakpem, who uses a wheelchair, worked with Dean of Libraries Christopher Dames and other staff members to help create an accessible study room in the Thomas Jefferson Library. They are also adding an accessible desk to the computer lab.

Hill had started a list of places on campus that were difficult to navigate for people with physical impairments.

The Able-Disable Partnership has been adding to it and next semester plans to hold a “Disability Walk and Roll” event – similar to the SGA’s annual safety walk – to move around campus looking for areas of concern.

Beyond the infrastructure issues that might exist, the Able-Disable Partnership has also been working with other student groups and educating them on being more inclusive for people with disabilities.

People at UMSL have been open to listening and making changes.

“Now that they’re hearing a lot of these issues, they’re very willing to work with us,” Smith said. “I know a lot of the people that we’ve worked with and met with, they’re really excited about this group. They love that this came together.”

This story was originally published in the fall 2019 issue of UMSL Magazine. If you have a story idea for UMSL Magazine, email [email protected].