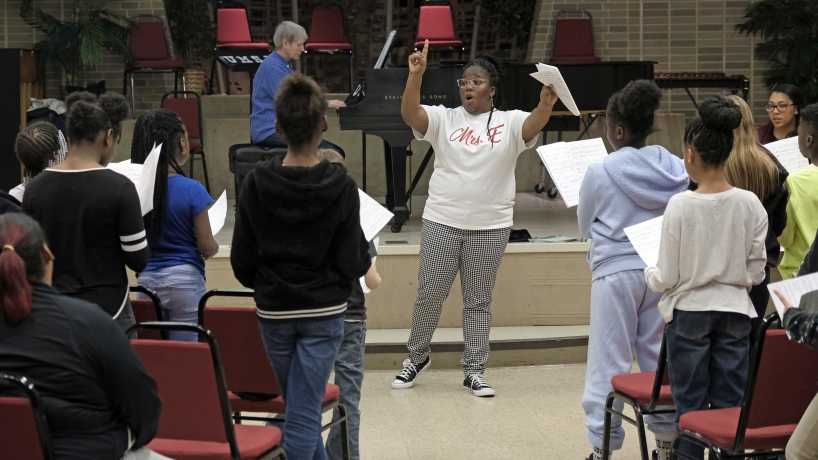 Maria A. Ellis directs third to sixth graders during their first rehearsal on the UMSL campus. The new choir is designed to make music education more accessible for students in North St. Louis County. (Photos by August Jennewein)

Rows of people spanning vast age and vocal ranges repeated after Maria A. Ellis as she demonstrated the four parts of a song. They were subdued at first, following Ellis’ lead.

When she gave the signal, harmonies swelled. By the end, the crowd was swaying and clapping, large smiles accompanying the music.

Though Ellis began directing choirs when she was 12 years old, it was graduating from the University of Missouri–St. Louis in 2017 with a bachelor’s in music education that made her an integral part of the local music scene. The St. Louis Children’s Choirs’ community engagement manager’s latest project is conducting a choir of young singers in North County.

Ellis’ route from passion to career encountered a few twists.

Although she loved participating in school choirs, she didn’t think her dream of becoming a conductor was attainable. Instead, she majored in business and took a job with AT&T after college, a lucrative position she found rather dull.

Even while pursuing a business path, music education stayed in the back of her mind. In 2013, Ellis decided to chase her dream.

“When I first applied to UMSL and had my audition, I was turned away because I couldn’t read music,” Ellis said. “I was told to come back the next year, so I took the summer and learned how to read music – basic elements like counting rhythms and sight-reading. I came back, auditioned again and was let into the program. Everyone was willing to take me where I was and help me build to the next level.”

From the time she enrolled at UMSL, she focused on a goal to one day work at SLCC. She encountered the organization while growing up in North County and considered it the ultimate vocal group. As a preteen, she’d participated in the community honor choir but couldn’t afford to join the program.

Her role includes working with ensembles, leading vocal music clinics and serving as a resource for teachers at local schools. She also leads workshop sessions, including one titled “Bach and Beyoncé” that focuses on similarities between classical music and hip-hop.

She helps coordinate community events for the seven ensembles and 435 students in SLCC. Singers are between 6 to 18 years old and come from 85 ZIP codes in Missouri and Illinois. Participation in the choir offers a wide range of advantages students may not be able to access otherwise, including travel throughout the world.

“It’s like playing sports,” Ellis said. “Going to the gym and playing football is one thing, but when you’re actually part of a team and everybody’s focus is football, it’s very different. That’s what we’re doing with a choir. It has a spark and magic when everybody loves to sing. What this brings is not only good music but it’s character development, friendship, opportunities. It’s something for the community to be proud of.”

Soon after joining SLCC, she noticed something was missing. The honor choir she’d participated in as a child had disbanded. She also realized that with the organization’s locations in West County and University City, North County students couldn’t easily participate. 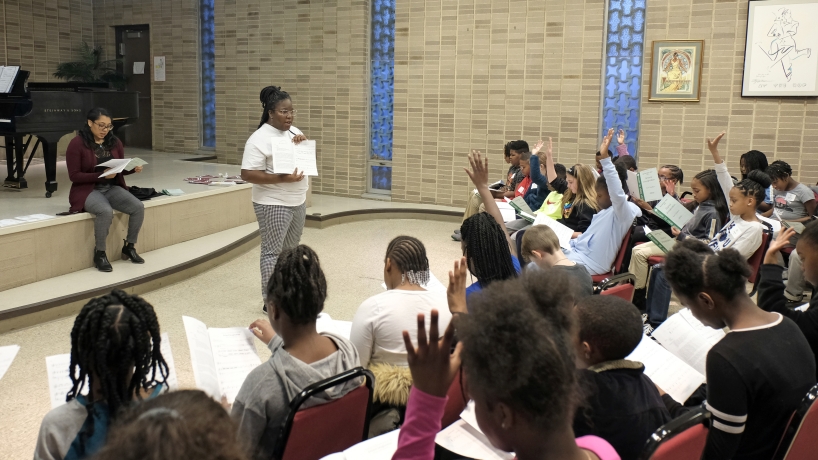 Maria A. Ellis explains a new concept during choir rehearsal. The North County native decided to start a children’s choir in the area after learning the group she’d participated in as a child had disbanded.

Ellis is bringing that vision to life by returning to the area where she grew up. She’s supported by Michael Smith, E. Desmond Lee endowed professor of music education and chair of the Department of Music, who greeted the idea with enthusiasm. Smith directs the E. Desmond Lee Fine Arts Education Collaborative, which hosts a yearly arts festival on the UMSL campus for middle and high school students.

The new choir welcomes children from third to sixth grade. According to Ellis, it’s the perfect age range to begin mastering skills such as sight-reading.

It’s a step toward her ultimate goal: creating programming that makes music accessible.

“I want to travel around the world, working with choirs of all ethnicities,” she said. “Some schools are on a different level than others. Schools that are affluent rank higher than those that are underserved or have a lack of resources. I want to find ways to make music available to everyone.”