Ulrich L. Lehner knows that many see studying the Catholic Church in the 16th through 18th centuries as “dry, lifeless scholasticism.” But he sees a rich history that is overflowing with wisdom about how to meet a host of modern challenges.

Lehner, who joined Notre Dame’s Department of Theology this year after 13 years at Marquette University, says the 300-year period following the Reformation can often be a source of inspiration and guidance.

“We can look at the past and see what worked before and what didn’t. Why were some paths taken and others not, and what were the reasons for these decisions? Perhaps we need to rethink them,” said Lehner, the William K. Warren Professor of Theology. “That’s the beauty of Catholicism. Sometimes the answers to modern problems can be found in the past, if only they are put in a new context.” 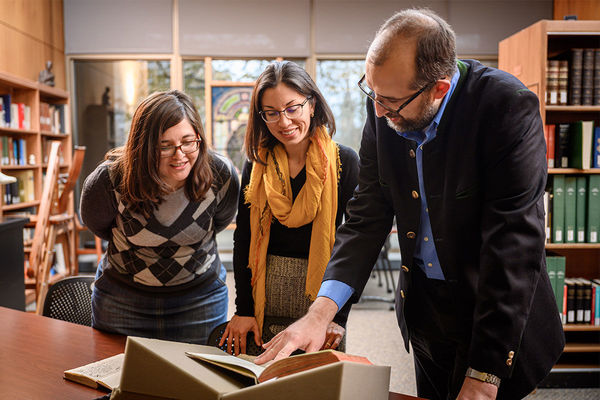 Lehner reviews a text with two of his graduate students in the Hesburgh Library’s Rare Book Room. The unprinted commentary — which Lehner chronicled in his 2011 book “Enlightened Monks: The German Benedictines, 1740-1803” — was written by Alphonsus Frey, an 18th-century Benedictine monk. Frey predicted, among other things, the coming of the Antichrist in 1983 and the end of the world in 2014.

Lehner, whose research focuses on the religious history and theology of the early modern period, the Enlightenment and the 19th century, points to the recent three-week Amazon synod — convened by Pope Francis to seek better ways to preserve the rainforest and minister to its indigenous people — as an example of such a moment that can be informed by lessons from history.

Some South American parishes go months without having a proper Mass because of a shortage of priests, prompting Amazonian bishops to recommend the Vatican allow the ordination of married men. This was an issue at the time of the Reformation as well, when Cardinal Thomas Cajetan, one of Martin Luther’s main opponents, suggested lifting clerical celibacy in order to keep Germans in the Church.

The Church has wrestled with these and other challenges since the Council of Trent, held between 1545 and 1563 following the Reformation. This period, Lehner said, was motivated by a dynamic spirit of reform that also attempted to integrate the voices of women better than later periods of history.

“There was a spirit of creativity, a spirit of leadership and — very importantly — people were not afraid of doing something new,” Lehner said. “I think when the Church is afraid, it is never for the good of the Church. And, of course, you can be confident if you have faith.”

Lehner explained that the discourse on human rights had its origin in 16th-century Catholicism and that new forms of tolerance and liturgical reforms were invented in the 18th century, when superstitions were denounced and the concept of a shared governance grew.

In Lehner’s book about that period, “The Catholic Enlightenment: The Forgotten History of a Global Movement,” he challenges the idea that only secular philosophers pushed progressive ideas such as equality, freedom, democracy, cultural diversity and tolerance. The book has already been translated into German and Lithuanian, with more translations forthcoming.

Lehner is the author of 10 books and editor of 17 volumes, including “The Oxford Handbook of Early Modern Theology.” He has twice been a distinguished fellow at Notre Dame’s Institute for Advanced Study, as well as a member and Herodotus Fellow at the School of Historical Studies at the Institute for Advanced Study in Princeton, New Jersey. In 2014, Lehner was inducted into the European Academy for Sciences and Arts and was recently elected to the prestigious Accademia Ambrosiana in Italy.

“It is with great joy that we welcome Ulrich to our department and the wider University,” said Timothy Matovina, chair of the Department of Theology. “He is widely regarded as the leading scholar of early modern Catholicism, and his deep commitment to integrate faith and reason will inspire students for years to come.” 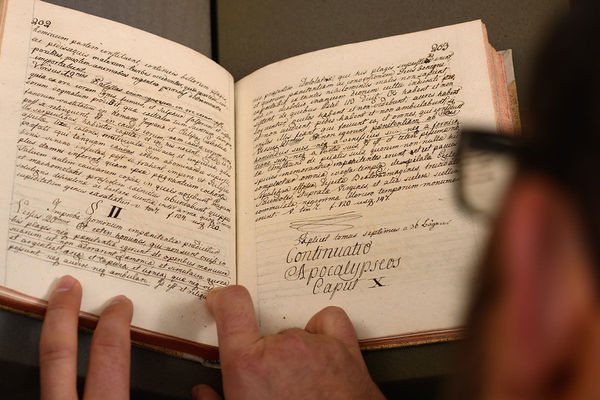 Lehner reviewing the Alphonsus Frey manuscript, which Notre Dame purchased in 2019 from a collector in the United Kingdom, in the Hesburgh Library’s Rare Book Room.

Lehner’s writing is not centered solely on historical topics. His 2017 book, “God is Not Nice: Rejecting Pop Culture Theology and Discovering the God Worth Living For,” already translated or being translated into four foreign languages, is focused on the problems many modern believers encounter. It is a response to having encountered many Christians, he said, who struggle to reconcile their beliefs with the “dogmas” of secular society.

“’God is Not Nice’ is somewhat a justification of why I teach theology, and why I think it’s important,” he said. “The mission of Catholic universities in the 21st century is to show undergraduate students that Christianity is not irrational and outdated, but something immensely joyful and fulfilling and relevant to their lives. Faith is not the enemy of reason but rather illuminates it, and the Church’s message is timeless.”

In the book, Lehner argues that too many Christians choose to believe in an undemanding God that fits their needs and makes them happy. Instead, he writes, God is unpredictable, awe-inspiring and demanding.

“I always tell my students, if you’re looking for a comfortable religion, look somewhere else. It’s not Christianity,” he said. “It is not boring — but rather life-changing, transforming and the greatest adventure of all.”

For Lehner, faith also is about always learning and growing. He compared it to workers staying up-to-date on programs they need to do their jobs.

“We constantly learn new things and develop our faculties. Our faith has to grow and develop, too,” he said. “A theology department in a top research university therefore also serves to encourage students, faculty and the wider community to grow in their faith, fostering a culture where difficult questions are not avoided.”

Notre Dame has always held a special place in Lehner’s heart because 20 years ago when he was on campus for a year doing research, he met his now wife, Angela, who was working on a master’s degree in theological studies.

He always dreamed of joining the Notre Dame faculty and has found it to be the ideal place to continue his research.

“This is the premier place for a Catholic in any discipline to work and to do research, so I always wanted to be here,” Lehner said.

Originally published by Tom Coyne at al.nd.edu on Jan. 13.