DETROIT—Woodworking equipment whirs as teens turn out the latest in creations and consumer products that have come from years of making things at the Brightmoor Maker Space in Detroit.

The projects of the moment are doghouses and sheds. The goal eventually is to build a tiny house.

Merging goals, dreams, ideas and inspiration with parts, pieces, productivity and creativity is what the Brightmoor Maker Space is all about. It’s a decade-long collaboration between Nick Tobier, professor at the Penny W. Stamps School of Art & Design at the University of Michigan, and Bart Eddy, founder of Detroit Community Schools in northwest Detroit. 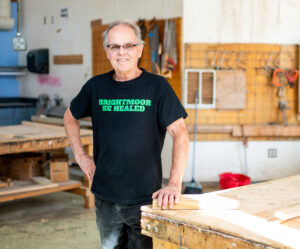 It’s also led to community wi-fi, neighborhood cleanups and a range of other projects that have made Brightmoor, once described as being in the state’s most dangerous zip code, look better and feel safer, residents and students say.

For Detroit Community High School student Jacob Fogel, who works at Brightmoor repairing bikes, it has changed his life for the better.

“This place is an incredible opportunity. It opens up worlds quite possibly never seen before,” he said.

Fogel has learned woodworking, welding and bike repair, among other skills. Fixing a bike that gave him, his friends and neighbors transportation and also paid work was transforming, he said.

Teens work for pay at Brightmoor on weekends, during the summer and after school.

“They provide you with skills free of charge that can help you with every facet of your life. So far I don’t find a lot of meaning in money. I find meaning in work,” Fogel said, as he described the first “forlorn bike” he fixed and made rideable again. “The bike shop ignited a fire in me I never thought was there.”

Working with kids from his school generates a “certain kind of camaraderie” not found in class or on sports teams, he said.

After years of working in spaces in the school and across the neighborhood, the Brightmoor Maker Space began operating in a permanent workspace about a year ago. It came to fruition after a seven-year crowdfunding campaign to renovate an abandoned 3,200-square-foot warehouse. Donations of equipment and tools from businesses and other supporters outfitted it to do all kinds of work and projects.

Last summer, it brought to life kombucha and flower carts that tooled around Eastern Market—a project completed for Quicken Loans in Detroit.

Before that, it operated in the school and across the neighborhood.

Today, the majority of work happens in the new space that’s located on Blackstone Street in northwest Detroit and painted on the outside with colorful murals of creative work—a sort of 21st century homage to Diego Rivera. Around the corner, an old school bus is now being renovated into a workspace as well. 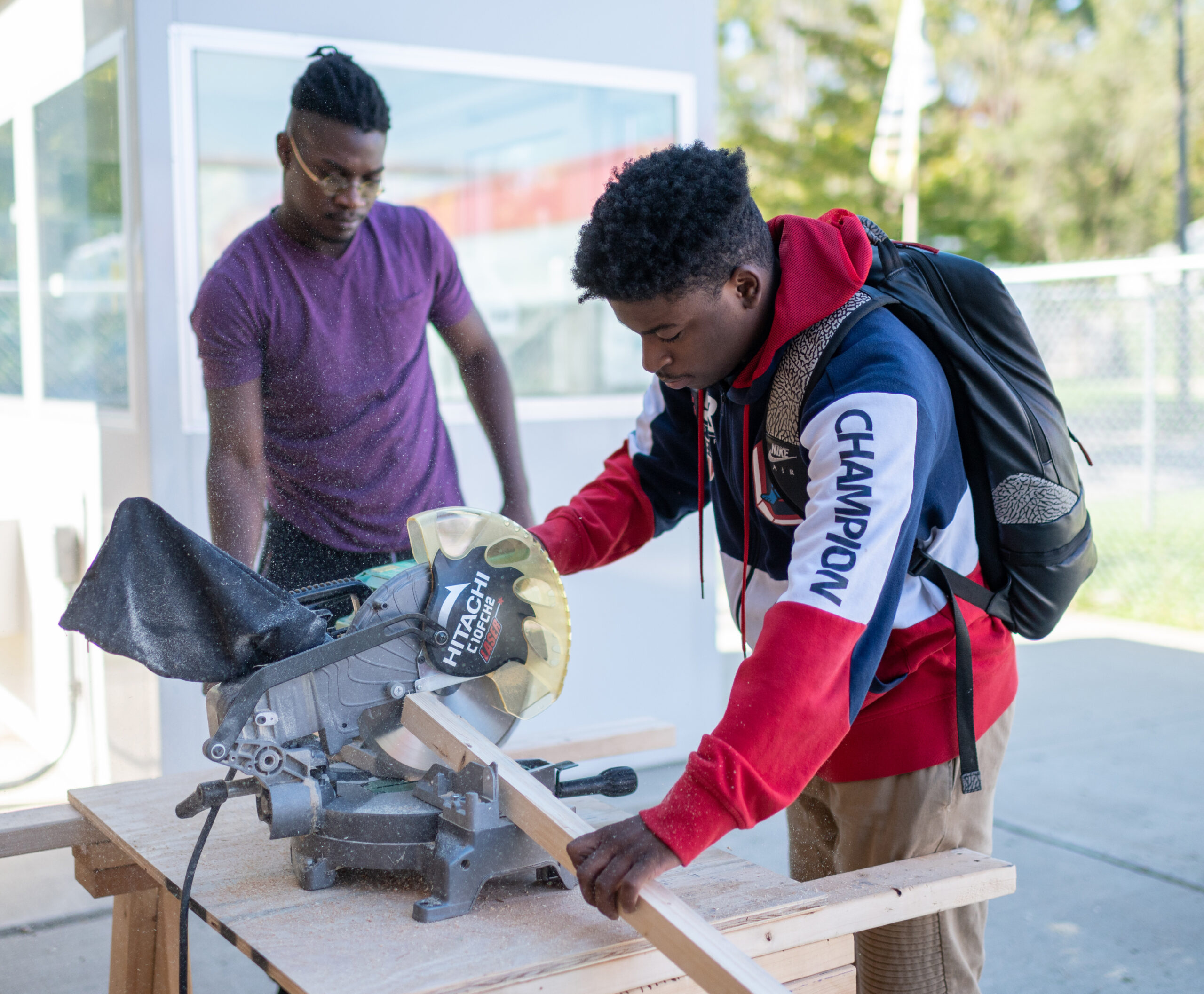 Diallo Carr, who recently turned, finds the same spirit of support at the makerspace, which he calls his office and place where he innovates. If not for Brightmoor, where he learned screenprinting after also discovering a passion for woodworking, he would not have launched his clothing line, Ordinary, nearly two years ago.

Brightmoor is “where it begins. This is the place to come and expand your ideas,” he said as students paint, saw and make things nearby.

Making happens inside and outside the building and across the neighborhood. It can be seen in rain gardens built at a church to purify rainwater, in food gardens that are tended and eaten by Brightmoor residents, in a summer outdoor movie theater, and in a prayer park that was a collaboration between students and visitors from Japan and China. Students weld, saw, sew, fix, draw, design, work with a 3D printer and much more. They are employed by the makerspace, too.

A successful sign-making business, a furniture-making enterprise, shoe designing and other startups have grown out of Brightmoor through the years as have numerous community improvement projects and neighborhood events.

“The Brightmoor Maker Space is where dreams come to reality, ” Carr said. “That’s how I look at it. … It made my dream come true.”

Hundreds of U-M students have traveled to Brightmoor to teach and learn alongside hundreds of students from the area. Dozens of professionals, from Michigan and from around the world, have come to teach. 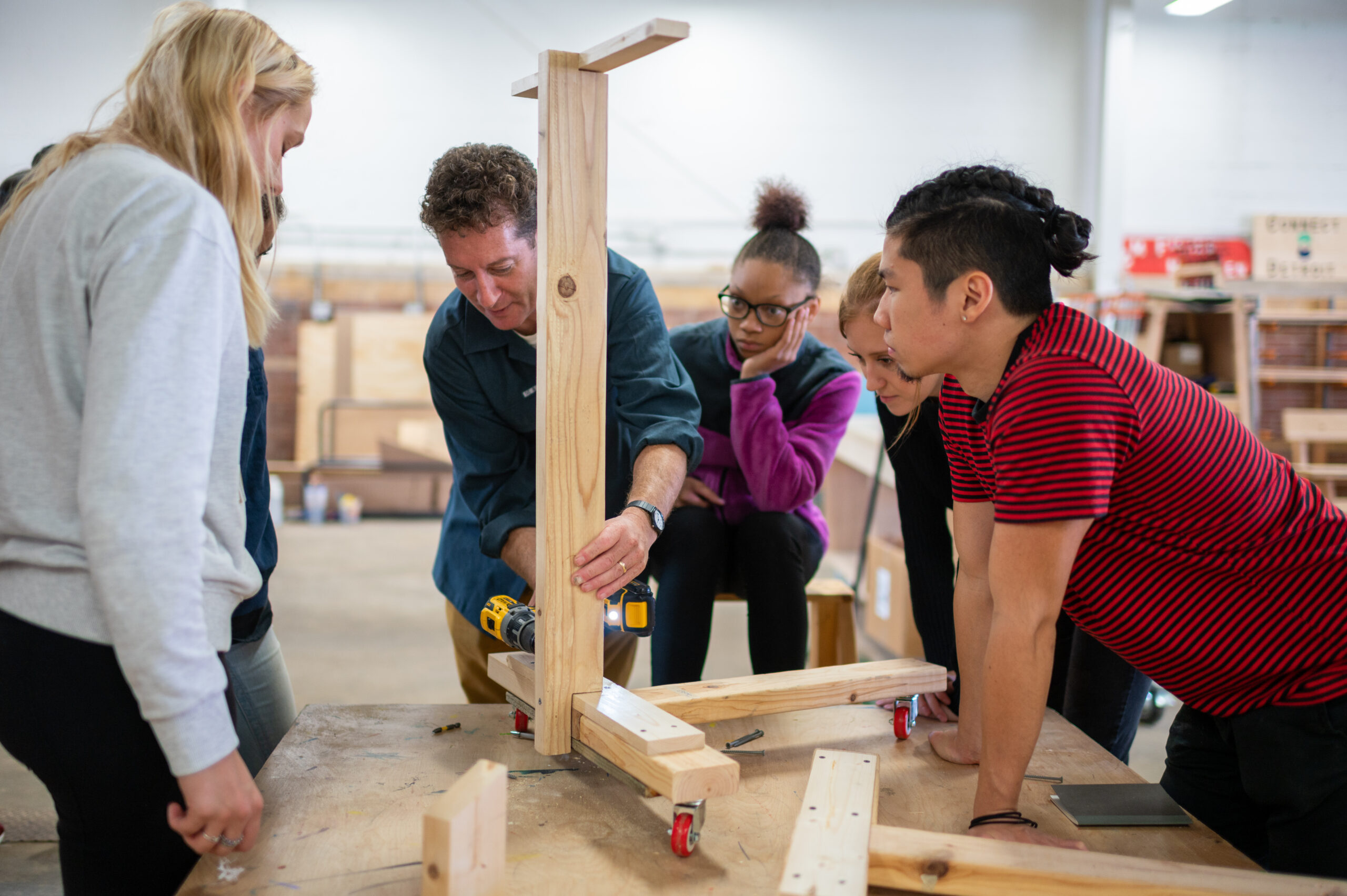 The intent of Brightmoor at first was to have the university bring arts back to students after funding cuts had taken away arts in schools. Hands-on learning in classes such as woodshop and auto repair were also being cut. Before long, the intent to reintroduce the arts expanded to Brightmoor becoming “an incubator for creative enterprises and a community space for developing skills.”

“Woodworkers started years ago in an abandoned garage,” Eddy, the Detroit Community Schools founder, said. “They began with handcrafted community signs. … All of a sudden people came and said, ‘We want a sign.’ … We said, ‘OK, we’ll charge you.’”

“The sky’s the limit for a program such as this,” Eddy said.

A place like Brightmoor is critical in a community of children who have lived through traumatic situations, he said.

He said the fact that there have been zero fights between students since the makerspace began 10 years ago is evidence of its impact. It is critical to provide them with a positive environment and to stimulate creativity, he said.

U-M students like Christina Montalbano visit the makerspace regularly to work with the kids as part of Tobier’s Change By Design course at U-M. She worked to build and paint wooden scooters this past summer. They will work on the bus later. She is grateful to get to know the kids, to have fun and learn and grow in ways not usually available in the campus classroom. 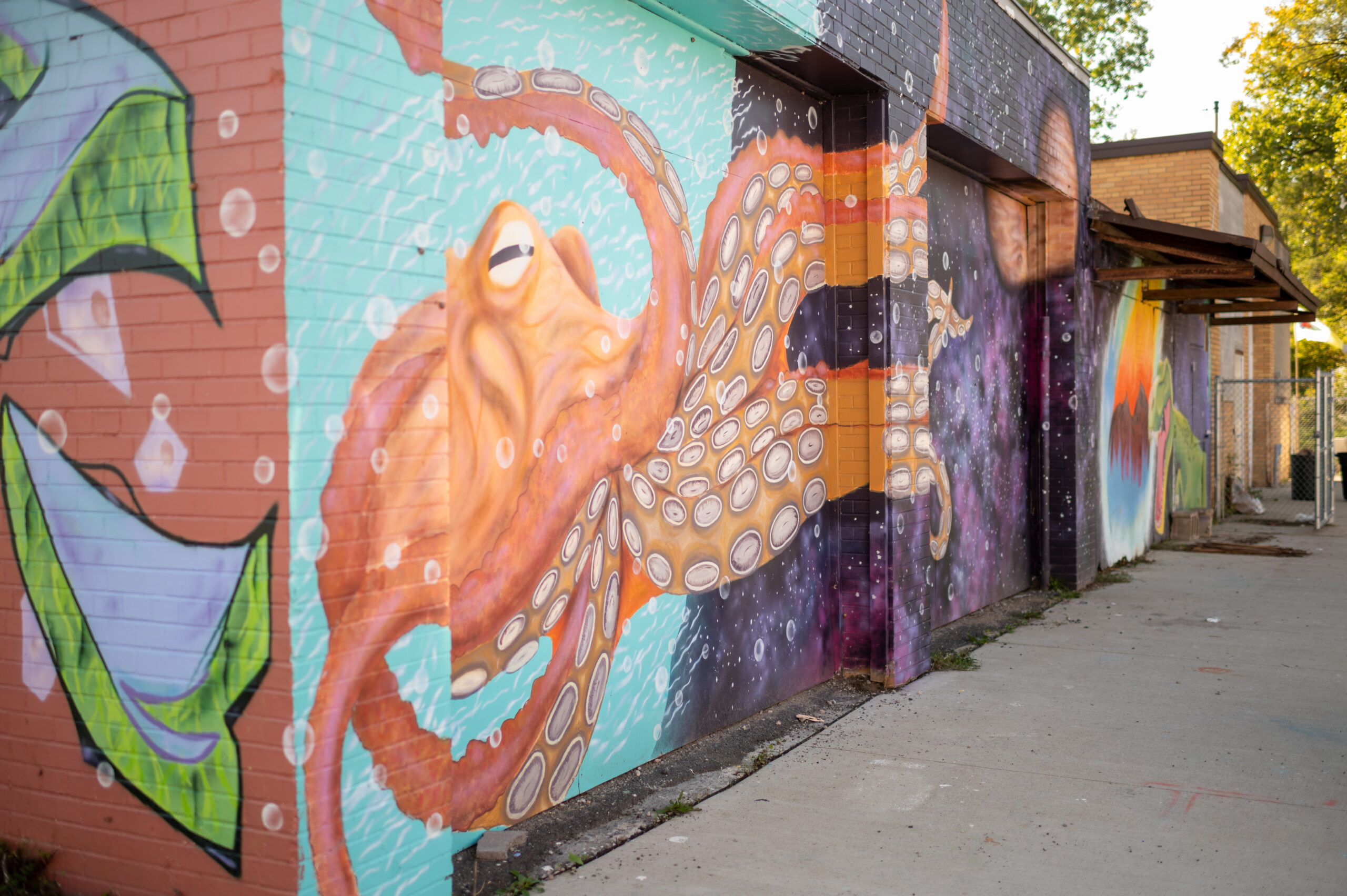 Lashay Pearson, a 2013 Detroit Community Schools graduate and regular at Brightmoor Maker Space as a teenager, is now an instructor. The experience as a student transformed her from a teen and young adult too shy to talk to more than a few friends at a time to a confident teacher spreading knowledge in front of large groups.

The students also learn “money management, teamwork skills, to be creative, think outside the box. … This is a place of entrepreneurship. This is our creative zone … a place where they can let go and do something they can’t do inside of school because it’s not offered in a lot of schools,” Pearson said.

With a generation or two of children not being offered the woodworking and other classes that let them use their hands, “they no longer see school as having something for them,” he said.