At the start of the new year, the University reflects on a busy and productive 2019. We are proud of the efforts and accomplishments of faculty, staff, students, and alumni in advancing Yale’s sustainability goals, making impacts locally and globally, and connecting across disciplines and departments on creative and innovative solutions to today’s complex challenges. Here are some of the highlights:

In September, Yale hosted the annual meetings of the Sustainability and Real Estate (Facilities) groups of the International Alliance of Research Universities (IARU).  IARU is a presidential-level partnership of eleven international research-intensive universities from nine countries across the globe that share similar values, a global vision and a commitment to educating future world leaders. The outcomes from the meeting are shared projects related to upcoming global conferences, the UN Sustainable Development Goals, scope 3 emissions, and life cycle costing of buildings.
In November, Dr. Robert Dubrow and Dr. Jodi Sherman, faculty members at the Yale School of Public Health and Yale School of Medicine respectively contributed to the launch of the Lancet Countdown 2019 Report. According to Dr. Dubrow, “The report emphasizes that if the world continues on its business-as-usual pathway with regard to greenhouse gas emissions, the health of every child born today will be profoundly endangered by climate change, from cradle to grave.”

In February, the Yale Divinity School hosted the second annual Graduate Conference in Religion and Ecology, which provides a space for students to engage in dynamic, interdisciplinary conversations across curricular boundaries, and strives to connect ethos with ethics, and ethics to applicable practicality.

In August, each of Yale’s 14 residential colleges launched their own Sustainability Action Plans for the first time. Since the release of the plans, Sustainability Liaisons in each of the colleges have been implementing projects and designing initiatives to drive them toward accomplishing their goals.

Yale’s annual Celebrate Sustainability took place throughout campus during the second week of October. Events included Growing Native Plants from Seed, Tree Planting, a Pay As You Throw Celebration, and much more. The highlight of the week was a poster session and reception where 20 departments and colleges from throughout campus showcased their sustainability innovations, and Bryan Garcia (FES ’00), the CEO and President of the CT Green Bank offered a keynote about Yale’s role in supporting sustainability in Connecticut.

Throughout spring 2019, students from the Schools of Architecture, Public Health, and Forestry &Environmental Studies collaborated with peers from Cambridge, Oxford, Harvard, MIT, and Stanford to co-host a series of events focused on Nature, Heath, and Built Environment. Notable speakers at Yale included Vivian Loftness from Carnegie Mellon and Allison Mears from The New School.

In January, Yale hosted top Chinese chefs for the Food Forward Forum, a sustainability-focused culinary exchange. The chefs came to Yale to learn how to make their own menus leaner and greener. The forum was part of a larger initiative for Yale Hospitality to make its sustainability and wellness expertise available to the international food industry.
In February, in coordination with Yale Health, Yale Sustainability hosted the fourth annual Declutter, Destress, Donate campaign, focused on empowering individuals to make positive changes in their personal lives and to help others in the community by donating materials and diverting them from the waste stream.

In September, Yale Sustainability launched a project to assess the use of toxic materials in the arts part of campus. Led in collaboration with Environmental Health and Safety and the Schools of Architecture and Drama, this work is focusing both on improved communications about risks and the reduction of toxic materials coming onto campus.

In October, Yale hosted the second annual Forward Food event in collaboration with the Humane Society of the United States.

In September, Dean Takahashi, Senior Director of the Yale Investments Office announced plans to establish the Yale Carbon Offset Laboratory (COLab) in 2020. This effort will engage faculty and students from across Yale who are developing technologies that sequester and store carbon, and reduce greenhouse gas emissions.

In April, Yale Grounds Maintenance implemented smart sprinkler and irrigation systems throughout campus, focused on decreasing water usage. The app, which is connected to local meteorology forecasts, will pause if rain is predicted, thus limiting waste by complementing what is naturally occurring.

During the summer, faculty members and local researchers teamed up with grounds maintenance employees to launch a set of designed experiments in support of the development of the Yale Biodiversity Plan. The results of the summer work have already informed next steps for a rain garden installation on the athletic campus.

The new Yale Science Building (YSB) opened in August. Located in the footprint of the former J.W. Gibbs Laboratory building on Science Hill, the highly energy-efficient YSB offers faculty and students seven stories and 280,300 square feet of newly finished space in which they may answer some of the most important scientific questions of the 21st century.
In December, Procurement established new design standards to eliminate the presence of flame retardants and other toxic chemicals in furniture for new building and renovation projects. A guide was also created to aid the Yale community in purchasing healthier furniture.

In January Yale launched the Pay as You Throw (PAYT) pilot program. A first-of-its kind pilot among American higher education institutions, the pilot was focused on a simple question: if a price tag were attached directly to the amount of trash we throw away, would we be incentivized to reduce our waste and improve our recycling practices? In December, the results of the pilot indicated that data and information help change behavior when it comes to waste generation. Moving forward, the Office of Sustainability will collaborate with Facilities and other key operational groups to integrate lessons learned from the pilot to inform future programming and decisions around waste management at Yale.

In September, Berkeley college launched a pilot program aimed at improving recycling efforts that is testing the use of recyclable paper bags instead of plastic bins. A mid-year survey showed mixed results and highlighted the need for better communication.

In May, Yale’s 318th Commencement eliminated single-use plastic water bottles from the ceremony, saving around 11,000 bottles from entering the waste stream in the effort. The plastic bottles were replaced with compostable cups and the encouragement to bring reusable containers  for hydrating.

In July, Yale earned second place for The Most Emissions Prevented in the Drive Less Connecticut competition. Yale commuters recorded 4,225 greener trips, 38,585 miles not driven, and over 65,300 pounds of emissions avoided.

In October, Yale Sustainability distributed the Transportation Survey, focused on gathering information on commuter habits within the Yale community. The report will be released early 2020, with a focus on improving the existing Yale infrastructure for commuters of all types.

In December, Yale was awarded funding for the purchase of an electric bus to add to the shuttle fleet.

2020 promises to be a remarkable year for sustainability. The Office of Sustainability looks forward to another year of marking and making history, and invites everyone in the Yale community to join in by resolving to take action. 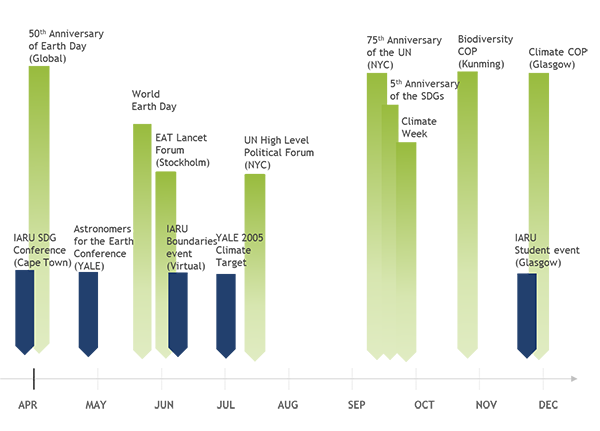 Yale is committed to building a more sustainable world. By doing what we do best—integrating science, the humanities, and our community—Yale creates, tests and adopts innovative solutions to the environmental and social challenges we all face.