Necessity as much as aesthetics drove Wilson Adams’ interest in graphic design. He wanted to go beyond predictable two-dimensional charts with labels to illustrate his research.

Adams, a Ph.D. candidate in biomedical engineering, taught himself how to create 3D images and iterated further, adding more complex representations such as light dispersion and diffraction. He discovered he enjoyed toying around with designs and realized they could do more than punch up presentations and journal articles. Good design could engage more scientists and, better still, reach out to non-scientists.

Though starting a company was not part of his graduate school agenda, in February 2020 Adams did just that. He named the venture Fluorcyte — combining fluor, as in fluorescent, and cyte, another word for cell — and launched an outlet for science-inspired graphic design that combines his interests in microscopy, open-source science and STEAM education. 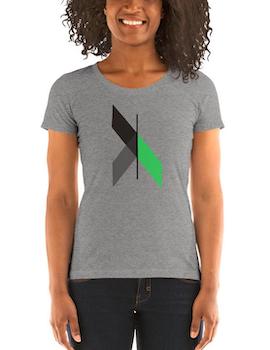 Fluorcyte.com showcases fluorophores, which are fluorescent molecules that can re-emit light upon excitation, on T-shirts, mugs and stickers. Science-loving shoppers can choose from spectral images, multiphoton-inspired designs and crowdsourced limited editions.

Many science-themed t-shirts feature images and puns that appeal only to those in the know. Adams didn’t want to take that route.

“These are not meant to be super nerdy,” he said. “There is a huge area of science that is visually appealing in its own right.”

Part of his mission is to support open-source science platforms, including FPbase.org, that have helped him in his advanced microscopy and neuroscience research. FPbase is an open-source database of fluorescent proteins, molecules and tools for optimizing experimental needs to measure fluorescence that Adams says he uses nearly every day.

A portion of the sales from a line of FPbase-branded products and the Spectral collection will go to help with that tool’s maintenance and development costs.