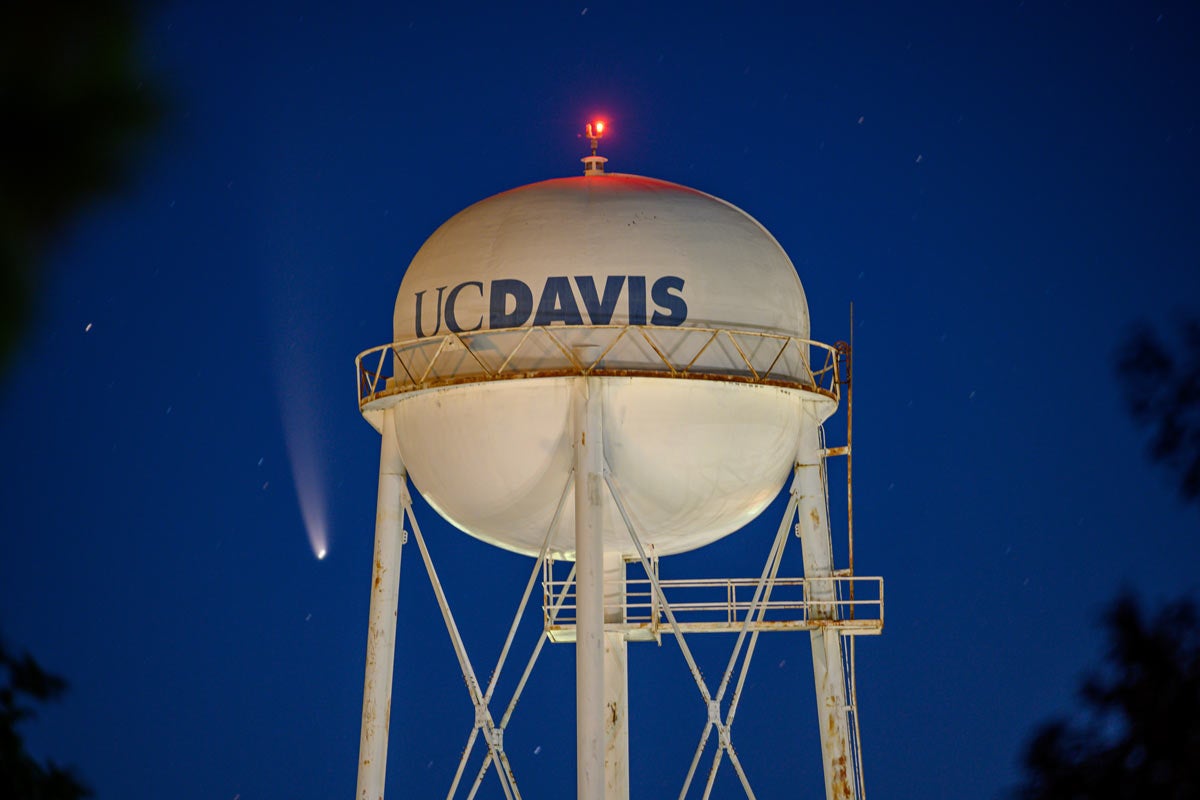 This image by Wayne Tilcock first appeared Sunday (July 12) in The Davis Enterprise, where Tilcock formerly worked as a photographer for 20 years. He’s been with UC Davis since last year, working as a photographer at UC Davis Health. He took this image of Comet NEOWISE on his own time, allowed his former paper to use it — and now he’s letting us run it in Dateline, too.

He captured the image at 4:30 a.m. last Friday (July 10), from a grassy area between Schaal Aquatic Center and UC Davis Health Stadium, using his Nikon Z7 with a 200-400mm lens at 400mm, on a tripod, exposure time 8 seconds.

He shot northeast through trees and past the water tower that stands between the Dairy Barn and Dairy Road Field. There was no one around except Tilcock, save for a few people working at the Dairy Barn across La Rue Road.

Tilcock also saw the comet early Thursday, driving north from Davis with his wife, Miranda, who works at the UC Davis Center for Watershed Sciences, and their children, Abby and Scout.

“My 9-year-old, Abby, spotted it out the car window just as we passed the golf course on Pole Line Road,” Wayne said.

“I was about the same age when Halley’s Comet came by in the ’80s and my mom took me out to see it. NEOWISE is putting on a much better show and it was great to get to share a similar moment with my kids.”

NASA experts will discuss and answer public questions about Comet C/2020 F3 NEOWISE during a broadcast of NASA Science Live on Wednesday (July 15). The comet is visible with the naked eye in the early morning sky and, starting this week, after sunset.

The NASA Science Live episode will begin at noon PDT on NASA Television and the agency’s website, along with Facebook Live, YouTube, Periscope, LinkedIn, Twitch and USTREAM.