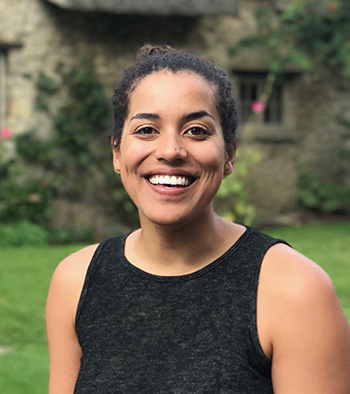 Diana Powell, an astrophysics graduate student at UC Santa Cruz, was among 132 outstanding scholars awarded fellowships in the 2020 Ford Foundation Fellowship Programs administered by the National Academies of Sciences, Engineering, and Medicine.

Powell won a Ford Foundation Dissertation Fellowship to support her work as she completes her Ph.D. thesis on exoplanets (planets around other stars). Her research focuses on understanding planet formation and planetary atmospheres, and she has been working with Ruth Murray-Clay, Gunderson Professor of Theoretical Astrophysics, and Xi Zhang, assistant professor of Earth and planetary sciences.

“Eventually, we want to understand which planets are most likely to host life, and the techniques I am developing to study planetary atmospheres can tell us how Earth-like a planet is,” Powell said. “My research also addresses long-standing problems in planet formation theory.”

Powell, when she graduates in spring of 2021, will become the 22nd Black woman to receive a Ph.D. in astronomy or astrophysics. As a UCSC graduate student, she has been active in mentoring undergraduates as well as graduate student peers. In her first year, she won the Graduate Division’s Outstanding Teaching Assistant Award, as well as her department’s Excellence in Mentoring Award.

Powell worked with Murray-Clay to develop a new “Introduction to Research” course for first-year and transfer students interested in physics, served as head mentor for the course, then went on to develop a mentorship program for undergraduates in physics and won a grant to institutionalize the program. She also established the first graduate student branch of LUMA, a peer mentoring group for women of color in astronomy.

“We are just beginning to see the positive impacts of the mentoring programs I have worked on at UCSC, and I am confident that the long-term impacts on the fields of astronomy and physics will be substantial,” Powell said. “I am determined to expand and refine these programs, while implementing other novel ways of increasing diversity in academia, throughout my career.”

As a Ford Fellow, Powell is following in the footsteps of her father, Philip Powell, who was part of the first cohort of Ford Foundation Postdoctoral Fellows. Now retired, he studied child psychology, focusing on gifted children, and was a professor of educational psychology at the University of Texas, Austin.

Powell said she first became interested in astronomy as a child in Texas, where the clear night skies of central Texas and the support of her parents helped foster her newfound passion. After earning a B.A. in astrophysics and physics at Harvard University, she chose UC Santa Cruz for graduate school, she said, because it is the only top-ranked astrophysics program at a minority-serving institution.

Powell’s research on exoplanets involves understanding the microphysics of small particles. For example, planet formation occurs in disks of material around young stars, where small dust particles evolve in the presence of gas to form the building blocks of planets. These initial stages of planet formation remain poorly understood, and Powell’s models provide new insights into the parameters that determine the final composition of planets.

In planetary atmospheres, the small particles Powell studies are the components of clouds. Clouds not only play an important role in regulating a planet’s climate, they also strongly affect astronomers’ observations of planetary atmospheres. “I model clouds in planetary atmospheres to explain their observed properties and make predictions of what we will see with the next generation of space telescopes,” Powell explained.

The most exciting aspect of the Ford Fellowship, she said, is becoming a part of the broader community of Ford Fellows. “It connects me with other fellows, and as a Black woman, it’s nice to see Black professors at different stages in their careers,” Powell said. “It’s a networking community that can help me on my path.”