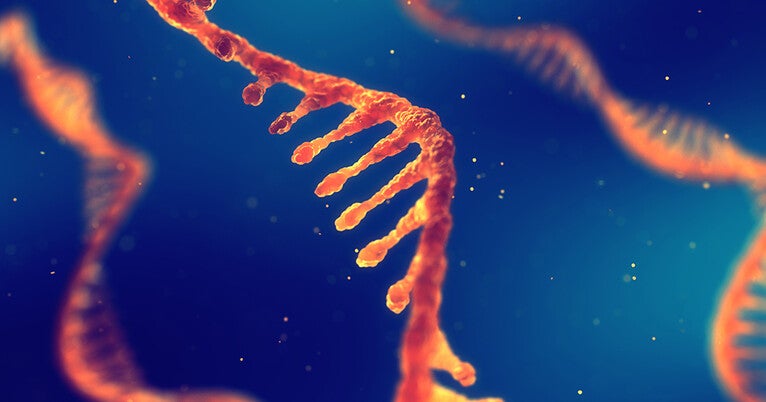 The development of the mammalian placenta depends upon an unusual twist that separates DNA’s classic double helix into a single-stranded form, Yale researchers report July 15 in the journal Nature.

The Yale team also identified the molecular regulator that acts upon this single strand to accelerate or stop placental development, a discovery with implications not only for diseases of pregnancy but also for understanding how cancer tumors proliferate.

“Placental tissue grows very fast, stimulates blood vessel formation, and invades into neighboring tissues, like a tumor,” said senior author Andrew Xiao, associate professor of genetics and a researcher with the Yale Stem Cell Center. “Unlike a tumor, however, the placenta grows through a precise, coordinated, and well-controlled manner.”

At the earliest stage of fetal development two linked processes begin simultaneously. As the fertilized egg begins developing specialized cells of the new life, another set of cells begins producing blood vessels in the placenta to nourish the growing fetus.

“In many ways, pregnancy is like a prolonged state of inflammation, as the placenta constantly invades the uterine tissue,” Xiao said.

The DNA of the cells that will make up the growing placenta share an unusual trait — the double helix begins to twist. The resulting torsion causes certain sections of the genome break into a single strand. Although the primary sequences of the DNA are the same between the placenta and embryo, the different structure of the DNA between the two helps determine the fate of the cells.

The Yale team led by Xiao discovered placental growth is then regulated by the sixth base of DNA,  N6-methyladenine. This base stabilizes the single-stranded regions of DNA and repels SATB1. SATB1 is protein critical for the organization of chromatin, the material that makes up chromosomes.

The findings could help researchers develop new therapies for conditions such as preeclampsia in pregnancy as well as certain types of cancer characterized by activity from single strands of DNA, the researchers said.

The research was primarily funded by National Institutes of Health and the Ludwig Family Foundation. A team of researchers led by Haitao Li in Tsinghua University also contributed to this study.