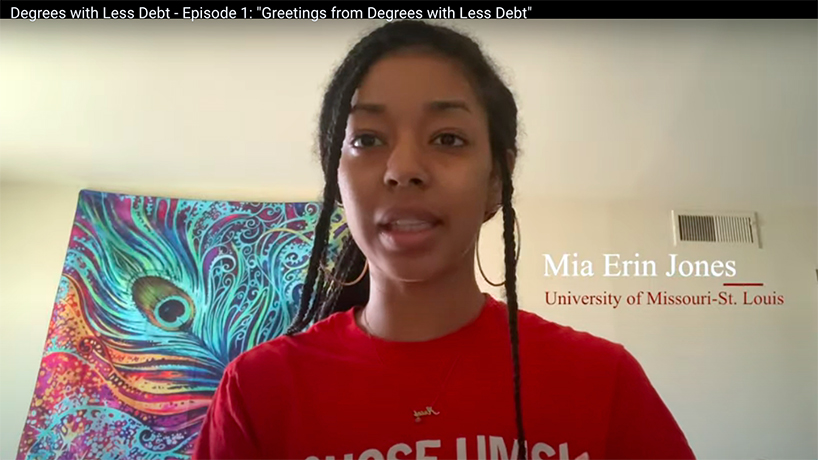 Mia Erin Jones discusses her experience as a student at the University of Missouri–St. Louis in the launch video for St. Louis Graduate’s second Degrees with Less Debt report.

College degrees have become increasingly critical for employment, with St. Louis adults holding a bachelor’s earning 77 percent more than adults with a high school diploma alone, according to a study by St. Louis Graduates.

That fact highlights the key importance of addressing degree completion gaps for low-income and Black students in the St. Louis area – where only 27.5 percent of Black adults 25 and up hold an associate’s degree or higher, lower than the general population.

St. Louis Graduates – a component fund of the St. Louis Community Foundation and a collaborative formed to address equity gaps in postsecondary education – aims to do something about that.

On Wednesday, the group released its second edition of the Degrees with Less Debt report, which named the University of Missouri–St. Louis as one of the top five institutions in the state that have strategies, practices and policies that support the enrollment and successful graduation of Black and Pell-eligible students. The stated goal of the report was to identify methods that could be adopted widely.

The other universities examined include McKendree University, University of Central Missouri, Southeast Missouri State and Webster University. St. Louis Graduates selected the five institutions based on publicly available data and interviewed administrators and students from each.

“In order for our society to thrive, it’s imperative that we provide education for all people, especially those from economically disadvantaged areas,” Sobolik said in the video. “Education is the game changer in the lives of our students, their families, the region and our nation.”

The video looked at the motivations of students and highlighted successful strategies first identified in the report.

Addressing financial barriers was a key priority named in both.

“College affordability is the biggest threat to low-income students both in terms of attending college and obtaining a degree,” Byrd said. “We currently have a system that expects students to spend 60 percent of their annual household income to send their son or daughter to college. That’s simply outrageous.”

Several UMSL practices were highlighted for their efficacy.

Financial efforts aimed at seniors were included in this category. In addition to loan repayment education sessions for seniors, the report singled out two senior financial aid efforts: the Finish Your Degree Scholarship and the Senior Degree Completion Program, the former having a six-year 92 percent graduation rate for recipients and the latter a 79 percent graduation rate.

Another critical element named in the report was inclusion, and the writers pointed out that UMSL’s mission included inclusion with the chancellor prioritizing it as part of leadership decision-making and faculty and staff makeup.

That’s a strategy that Jones noticed and noted in the video.

“UMSL doesn’t do anything without talking to at least a few Black student leaders first, especially if it concerns the Black students and that’s one thing I really, really like,” she said.

Other UMSL strategies mentioned were UMSL precollegiate services including the Bridge Program, which serves 5,000 students and 1,200 parents and has a 100 percent college placement rate. The report also commended the university’s large-scale Curriculum Alignment Process, which seeks to streamline degree pathways, and supplemental peer instruction.

In addition to the SI program, the report singled out the tiered system support led by Assistant Provost for Access and Academic Support Natissia Small through Student Enrichment and Achievement and Multicultural Student Services, which provides targeted support to students with GPAs of less than 2.5 and greater than 2.5 respectively.

Other student supports mentioned include the Triton Pantry, childcare and Inspire, the mentoring program for transfer students.

“We have positively contributed to student retention at UMSL by delivering a comprehensive support model for student success while simultaneously creating a culture in which student access, resources and sense of belonging is held as a priority,” Small said in the report.

Learn more about the strategies being utilized at UMSL, and the four other institutions, in the final report and video.