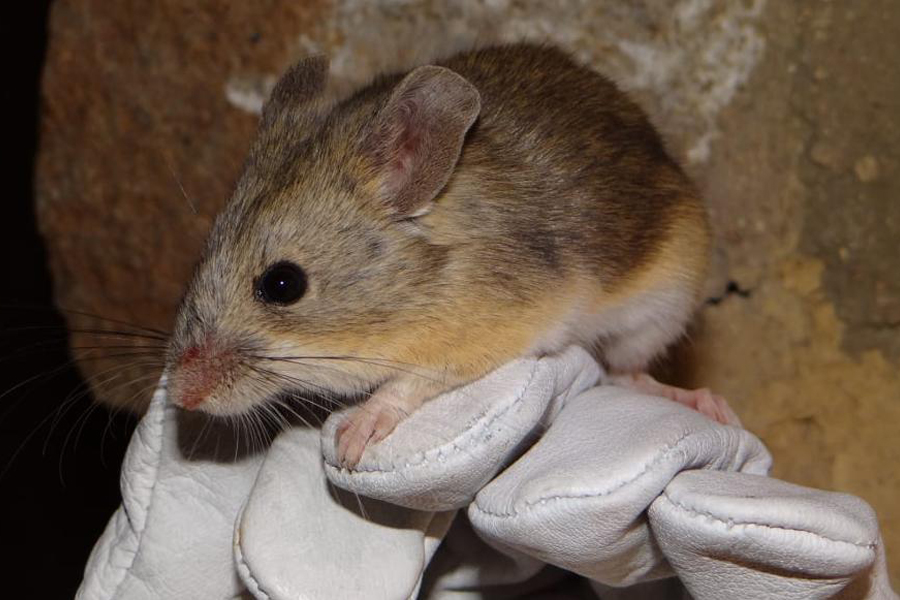 A yellow-rumped leaf-eared mouse captured near the summit of the Llullaillaco volcano on the border of Chile and Argentina. Credit: Marcial Quiroga-Carmona, Austral University of Chile

It was a surprising thing to see on the otherwise lifeless peak of a South American volcano — a mouse, specifically a yellow-rumped leaf-eared mouse, or Phyllotis xanthopygus, scurrying among the rocks on the summit.

The find was especially startling because the mouse was living at an elevation of 22,100 feet, a higher elevation than scientists had ever observed mammals living at previously. There, on the Llullaillaco volcano on the border of Chile and Argentina, the animal had managed to make a home in an unforgiving landscape.

“In one of the harshest environments on Earth — considered by some as the closest thing on our planet to Mars — these mice not only survive but apparently thrive,” said Florida State University Professor of Biological Science Scott Steppan.“This astonishing elevation shows to what extremes life is capable of.”

Steppan was part of an international team led by researchers from the University of Nebraska-Lincoln and Austral University of Chile, who undertook the mountaineering expedition, as well as contributors from California State University, Fresno and Modoc Medical Center. The group published their discovery in the journal Proceedings of the National Academy of Sciences.

The discovery is more than 2,000 feet higher than the previous record for mammals, set on the same volcano and announced just last year by Steppan and other members of the team. The mouse was found even above the highest known nests of birds, a record that was set during a 1921 expedition on Mount Everest.

Mice have special challenges living at such a high elevation. The air holds much less oxygen than air at sea level, temperatures rarely rise above freezing and ultraviolet radiation is intense. There also seems to be little food. There don’t appear to be plants or insects on the peak and even lichen is scarce. For now, what they eat remains a mystery.

The extreme environment of the volcano peak makes it an interesting setting for further research. Scientists hope to compare mice on the mountain with populations of the same species living at sea level to better understand the physiological and genetic changes brought on by living at high altitude.

The fact that the researchers’ specimen was found right at the summit suggests that if the mountain were higher, the mouse could live higher as well.

“To my mind, this apparently defenseless and cute mouse, who survives where larger, more robust or more mobile animals cannot — and even higher than humans live even with the aid of clothing and buildings — is an amazing animal,” Steppan said. “There might be other animals and plants living in more extreme places than we thought possible.”

This work was supported by the National Institutes of Health, National Science Foundation and National Geographic Society, as well as the Government of Chile.