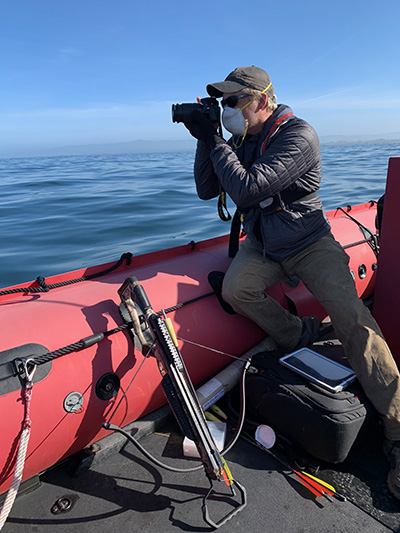 Researchers took photographs and collected biopsy samples from humpback whales in Monterey Bay to assess stress levels during pandemic-related reductions in ship traffic. Brandon Southall, a research associate at UCSC’s Institute of Marine Sciences and senior scientist at Southall Environmental Associates, is a member of the research team. Next to him in the boat is a crossbow used to obtain biopsies. (Photo by Ari Friedlaender)

When stay-at-home orders due to the pandemic caused a sudden drop in the normally heavy traffic of marine vessels in Monterey Bay earlier this year, Ari Friedlaender saw a rare opportunity to study the effects of manmade noise on stress levels in whales.

Friedlaender, an associate researcher in the Institute of Marine Sciences at UC Santa Cruz, quickly assembled a team to begin collecting blubber samples from humpback whales in the bay, which the scientists could use to measure the whales’ stress hormones. At the same time, he applied to the National Science Foundation (NSF) for funding through the NSF’s Rapid Response Research (RAPID) program, which has now awarded the team a $100,000 research grant.

“This is such an amazing opportunity,” Friedlaender said. “We can measure stress hormones in the blubber, we can get data on ship traffic, and there are hydrophones that continuously record acoustic data in the bay. We want to collect samples from whales during this period of reduced noise, and then go out again at the same time next year and compare stress hormone levels in relation to changes in human use of the bay.”

The hydrophones are deployed by the Monterey Bay National Marine Sanctuary and by the Monterey Bay Aquarium Research Institute (MBARI) as part of its Monterey Accelerated Research System (MARS) observatory. Other partners in the project include the Marine Mammal Center, Jeremy Goldbogen’s group at Stanford’s Hopkins Marine Station, and California Ocean Alliance.

“We were able to collect more than 40 blubber samples in April and May when there was relatively little noise in the environment,” Friedlaender said. “Because we got a lot of samples, we can see how hormones vary among males and females, and when we go out again next year we’ll be sampling the same population and hopefully some of the same individuals.”

In addition to the hormone analyses, Friedlaender’s lab will also perform genetic analyses to determine the sex and identities of individual whales.

During the period when the researchers were collecting biopsy samples, he said, all recreational boating and whale watching trips had stopped, and commercial ship traffic was also probably reduced to some extent, although he has not yet looked at the shipping data.

“We know the noise has been reduced, and a year from now we can see what things changed the most, or alternatively what didn’t change. It may be that ongoing commercial shipping was still causing stress even in the absence of other changes in boating,” Friedlaender said.

The results of the study will not only help scientists understand how much stress whales experience from different levels of disturbance, but will also inform ongoing efforts to set science-based goals for reducing the amount of noise produced by large vessels.