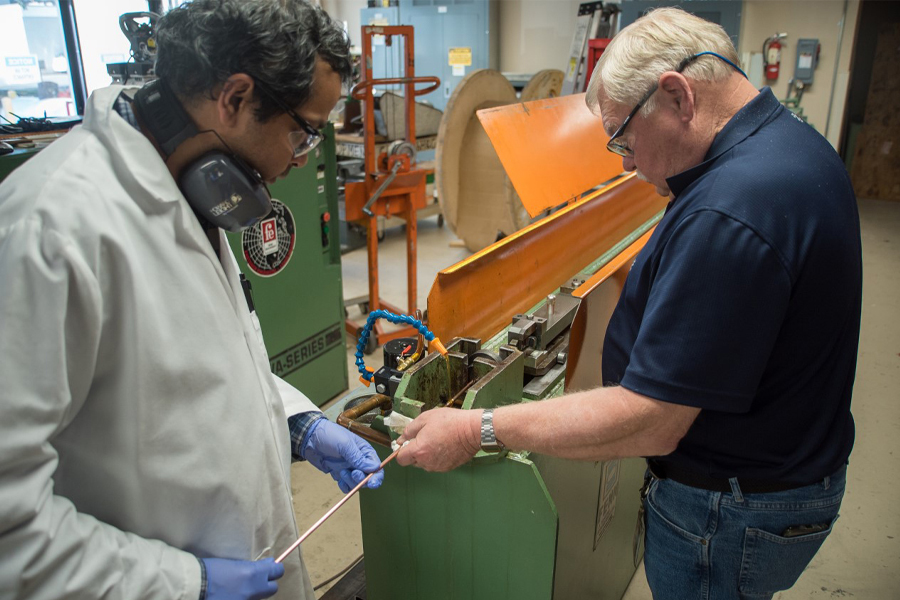 A grant from the U.S. Department of Energy will further research that will help make the next generation of high-energy particle accelerators.

The three-year grant allows the research team to continue their previous work funded by the Department of Energy (DOE) into niobium-tin (Nb3Sn), a superconducting compound that has long been used to build magnets for nuclear magnetic resonance and condensed matter physics research. The material is now just entering accelerator use for the Large Hadron Collider at CERN (the European Organization for Nuclear Research), where the Higgs boson particle was discovered in 2012.

This latest grant represents a 25 percent increase in funding, said David Larbalestier, the chief materials scientist at the National MagLab, who is leading the project. His team has fundamentally reengineered niobium-tin wires to carry significantly more current, which translates into a stronger electromagnet.

“The DOE is clearly pleased with our novel rethinking of niobium-tin, a workhorse superconductor whose properties had flat-lined over the last decade,” Larbalestier said. “We’re confident that we can continue to improve the compound’s performance until it meets the demands of tomorrow’s particle accelerators.”

Superconductors, unlike conventional conductors such as copper, can transport electricity with perfect efficiency because electrons encounter no friction while traveling in the superconducting wire. Superconducting magnets are a key ingredient for particle accelerators like the Large Hadron Collider. CERN is planning for major upgrades that will require much stronger superconducting magnets, and the MagLab has been contributing to that effort.

The approach of Larbalestier’s team was to add the elements hafnium or zirconium to the conductor, a tweak that significantly boosted the wire’s ability to carry current.

“We have succeeded in doubling the current density of niobium-tin at 16 teslas, the hoped-for field of a new generation of accelerator magnets for CERN’s planned Future Circular Collider,” Larbalestier said.

Using niobium-tin to build the dipole and quadrupole magnets that power particle accelerators has been a great engineering challenge. That’s why, until now, another superconducting material called niobium-titanium has been used in these machines.

But thanks in part to the research of Larbalestier’s group, niobium-tin has emerged as a promising key ingredient for tomorrow’s higher energy accelerators. Parallel work at Ohio State University, Fermilab and the company Hypertech has also contributed to the U.S. achievements.

“We are pushing the boundaries to understand the limits of niobium-tin by performing fundamental experiments as well as by developing and fabricating practical, high-field, high-current density niobium-tin conductors,” explained MagLab researcher Shreyas Balachandran, a co-principal investigator on the grant. “This new funding enables us, working with CERN and U.S. industry partners, to improve alloy development, in-house fabrication and characterizing the material’s microstructure to the nanoscale.”

During the grant application process, Larbalestier’s team was praised for how effectively it trained younger scientists to be leaders in the high-energy physics community. Student researchers on the project have gone on to work at CERN, the Air Force Research Laboratory, Commonwealth Fusion Systems and other industries.

The research award is one of 64 awards totaling $132 million related to high-energy physics that DOE has announced. The awards aim to advance knowledge of how the universe works at its most fundamental level. The projects involve scientists at 53 U.S. institutions of higher learning and include both experimental and theoretical research into such topics as the Higgs boson, neutrinos, dark matter, dark energy and the search for new physics.

The other co-principal investigators on the grant are: Chiara Tarantini, who has contributed insight into niobium-tin’s behavior, working with Steve Heald at Argonne National Laboratory’s Advanced Photon Source; and Peter Lee, who produces detailed understanding of nano-, micro- and macro-structure in these new alloys.