Senior Lecturer Michael Appell discusses corporate social responsibility and what it means for institutions like the NFL’s Washington franchise. 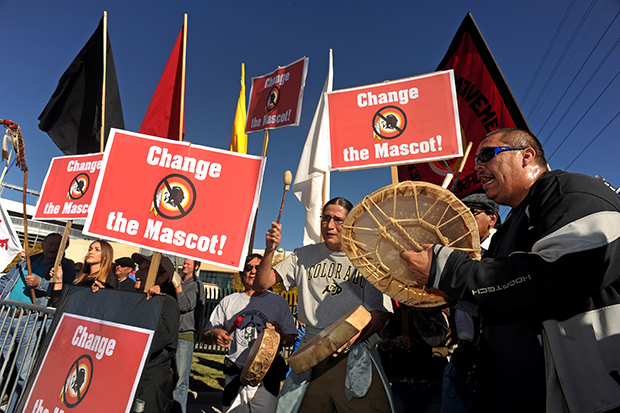 For now, they are the professional sports team that must not be named.

But in the near future, the National Football League’s Washington franchise, who are currently known by a name that is offensive to Native Americans as well as many others, will drop their racist moniker and adopt a new identity.

Team owner Dan Snyder resisted a name change for years despite widespread protests from many inside and outside football fandom. The reversal was announced only after a series of corporate sponsors threatened in July to end their relationship with the team.

Heller School for Social Policy and Management senior lecturer Michael Appell, an expert in corporate social responsibility who spent 20 years in the footwear industry working with business leaders, is disappointed that it’s taken so long for the Washington team to adopt a new name.

He also believes the franchise and other institutions in similar positions have a lot to gain by embracing the spirit of protesters and activists making their voices heard. BrandeisNOW discussed with Appell the Washington situation and the role corporate social responsibility can play in impacting profits.

BrandeisNOW: Why is Dan Snyder changing his team’s name only now?

Appell: I don’t think they did it because fans have been up in arms or because of this unique, historic moment we’ve seen with nationwide protests. This was driven by the needs of corporate America. Five of Washington’s big sponsors — Pepsi, Walmart, FedEx, Nike and Amazon — exercised their clout by speaking out against the team’s name. This was also a way for them to mitigate risk and protect their brands’ reputation.

BrandeisNOW: Big brands are increasingly speaking up on social issues, but is there any substance to withdrawing sponsorship or is it just PR for them?

Appell: Speaking out is definitely a trend and in many cases it’s superficial. It’s easy for companies to back LGBTQ rights and say they believe Black Lives Matter on social media and TV commercials. The hard work is something many haven’t done, and it includes hiring and promoting people of color in their companies and putting in place an operational plan that goes beyond PR needs.

These companies feel consumers want to believe their favorite brands understand this historic moment. But they’re also counting on the consumer to not look below the surface and see what’s really going on once the moment passes.

Appell: A lot of corporations make millions or billions of dollars and find it convenient to fund volunteer or philanthropy programs. That’s not corporate social responsibility, which is about creating programs that respond to social and environmental problems, as well as responding to the financial bottom line. I believe there’s shared value in these two endeavors. You can address these problems while contributing to profits.

A great example is General Electric and their Ecomagination venture. It’s a multi-billion dollar division focused on improving the environment through solar and wind power products, hybrid vehicles and fuel efficient jet engines. And it’s very profitable for GE.

BrandeisNOW: How would you advise the Washington NFL team to incorporate social responsibility into their work?

Appell: If I were advising Washington I’d say make lemonade out of this lemon. This is a chance to begin anew. Frame it as a new start for the team. If ownership doesn’t see this crisis as an opportunity, they should.

BrandeisNOW: Where does this leave other professional sports teams and organizations with questionable brand identities?

Appell: We’re going through a major cultural transition, but I worry teams will be resistant to change and won’t embrace social responsibility because they feel they’re OK with their sponsors.

Consumers have tremendous power and don’t exercise it. It’s easy for companies to say they support cultural changes because they believe it might help distract consumers from what really matters. There’s really no strong consumer movement in America to educate people on how to be social justice consumers. It’s a big failure of the social justice movement in America. And without a consumer movement, more companies will themselves accrue more and more power.