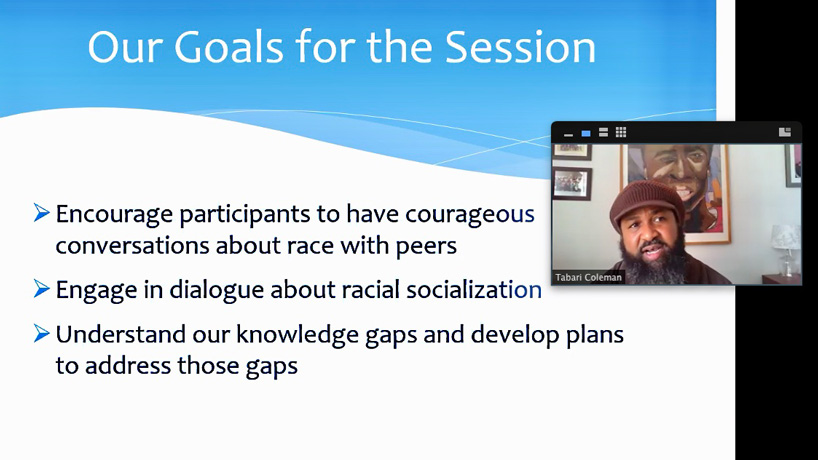 Tabari Coleman, the director of professional development at the Anti-Defamation League, has been leading UMSL students in a three-part series on race and racial socialization titled “Dialogue, Decisions and Dissonance.” (Screenshot)

Tabari Coleman was setting expectations for a small but diverse group of University of Missouri–St. Louis students – and a few staff members – who logged onto Zoom July 9 for the first in a three-part series of discussions titled “Dialogue, Decisions and Dissonance.”

The object of the session was to start a discussion about racial socialization that built awareness of knowledge gaps among the participants and helped to develop plans to address them. It was all part of an effort to begin building a more tolerant, understanding and inclusive community, starting at the ground level.

Coleman serves as the director of professional development at the Anti-Defamation League. Joining him to help lead the discussion during the July 9 and July 16 sessions were Tiffany Khang, the director of equity and inclusion at The College School, and Kaytlin Reedy-Rogier, program coordinator for the St. Louis Integrated Health Network’s Pipeline to Compassionate Care project.

“We’re not here to lecture you to tell you what to think but rather engage you in opportunities to reflect and dialogue around some of the issues that are really present for all of us,” Coleman said as he kicked things off. “I imagine there are a number of reasons that may have made you all want to be here today.”

He proceeded to begin a conversation primarily about race and racism but also sexism and other forms of discrimination.

Participants were asked to consider their own biases and prejudices and some of their origins in the way people are taught – consciously and unconsciously – by the society in which they live.

“We’ve tried to create safe spaces in these conversations, but we don’t ever guarantee comfortable spaces,” Reedy-Rogier said. “I think it’s really important for us to remember, as we’re having these conversations, that at some points, you may start to feel uncomfortable. We ask you to lean into that and to really figure out why you’re feeling uncomfortable with some of the conversation and to start to really delineate between discomfort and feeling unsafe. Oftentimes our places of discomfort are where we’re learning or where we’re growing.”

The second session built on the first and included discussion of conflict triggers and microaggressions – the everyday verbal or behavioral or environmental slights or indignities, whether intentional or not, that communicate hostile or derogatory views of people who are part of a particular, often marginalized, group.

The series of discussions began less than two months after the death of George Floyd in Minneapolis, which ignited a national dialogue about racism as protesters marched in cities across the country. But the conversations didn’t focus on any singular event.

“The issues that we’re facing in our country right now, pandemic aside, are issues that have been here,” Coleman said. “Structural oppression, structural racism, structural sexism – all of those pieces are a part of the infrastructure and the makeup of this country, whether we like it or not.”

That is why Natissia Small, UMSL’s assistant provost for access and academic support, had been working with Coleman to coordinate this type of dialogue since last winter. He had been scheduled to speak on campus in March before the onset of the pandemic forced a move to remote learning and shut down on-campus events.

Small was glad to be able to arrange the virtual series at a moment when there’s so much attention on structural oppression.

She has plans to bring him back to campus – or another virtual event – during the fall semester as previously planned.

“Creating a safe space for students to openly have dialogue about their experiences that will lead to embracing differences, and providing an opportunity to navigate those differences – with an open mind – remain critical as we move forward,” Small said. “Sustaining this type of programming is imperative as we strive to create a strong sense of belonging for all.”

Coleman will lead one more session as part of this summer’s three-part series from 11 a.m. to 1 p.m. on Thursday. The session will address communication strategies and how to more effectively participate in discourse that moves us away from cognitive dissonance to radical acceptance. To take part in the discussion, register here.