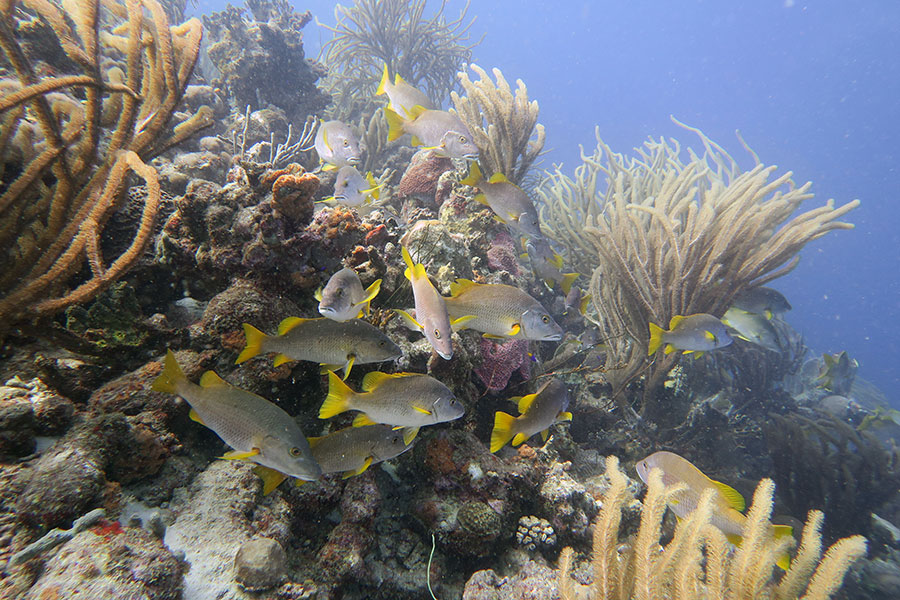 Schoolmaster snappers congregating around the soft corals on the fringing reefs of Bonaire.

In recent decades, the decline of living hard coral on reefs around the world has raised concerns among marine experts. For years, the presumption was that decline signaled that an entire reef’s future was threatened.

A study by Florida State University researchers shows that might not always be the case. While a complement of healthy coral is still preferred, dead or dying coral might not be fatal for an entire reef.

The research used 10 criteria to measure reef health, including diversity of corals, diversity of fish, the potential economic value to reef fisheries, the presence of juvenile corals and the presence of larger fish. Tracts of reef that performed in the top 10 percent of each criteria constituted “bright spots,” Lester said.

“We found numerous ‘bright spots’ are thriving despite low coral cover,” she said. “There is a lot of site-to-site variation that is not at all predicted by whether the site had low or high coral cover.”

McCoy said that when researchers try to picture reefs with low coral cover, it’s easy to imagine a barren landscape.

“As many tourists and divers will vouch, that’s often not the case,” she said.  “There are many possible futures for reefs that have lost coral cover. The ‘bright spots’ we found are a product of that.”

Understanding how bright spots thrive while other spots do not could be a key in helping to ensure the future of reefs around the world.

“We are increasingly in the situation where coral reefs are going to have less coral than they did in the past,” Lester said. “Decades ago, reef structures had 50 to 60 percent cover of hard live coral in the Caribbean, where the data was gathered. Now it’s 20 percent or less.”

In addition to their natural beauty, reefs provide profound, tangible benefits, including serving as protection for shorelines, a valuable source of food and as a boon to tourism and cultural importance. Some compounds harvested from reefs also are used for medical or pharmaceutical benefit.

Rassweiler said preserving and restoring coral is crucial but efforts should include better understanding bright spots.

“We all agree that we should be working to preserve and restore coral, but we show that many services can persist with little coral, and we need to better understand how we can encourage and spread those functional bright spots.”

The study relied on a synthesis of previously collected data gathered at more than 300 reef sites in the Caribbean. It was funded through the William R. and Lenore Mote Endowment at FSU’s Department of Biological Science.