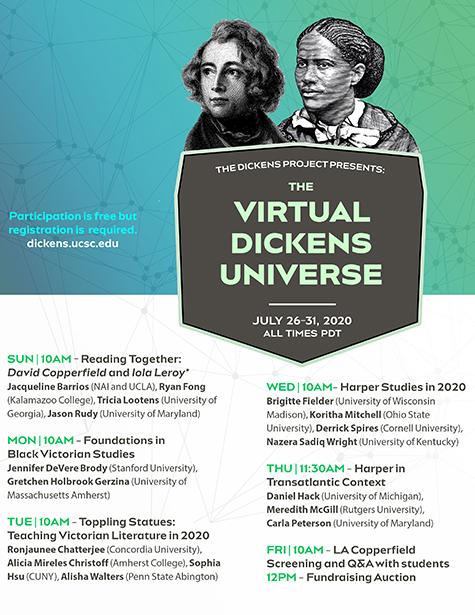 For nearly four decades, the Dickens Project at UC Santa Cruz—the largest multi-campus consortium on Victorian studies in the world—has presented the Dickens Universe, a week of intense study and festivities among the redwoods, usually focused on a novel by Charles Dickens.

But this year, due to the COVID-19 pandemic, it will instead be hosting a weeklong Virtual Dickens Universe, running from July 26–31.

The originally planned program on campus was set to focus on Dickens’ David Copperfield plus Iola Leroy: Or, Shadows Uplifted by Francis E.W. Harper, one of the first African American women to be published in the United States.

While that is now scheduled to take place in 2021, this summer’s week of virtual programming will offer a range of online panels and conversations that will provide context for those books, featuring scholars from Victorian studies and early African American studies They will discuss links between the two fields, as well as approaches for addressing race and racism in the classroom, and ways to engage with Black studies in the 19th century.

“Harper, a prolific poet and essayist, was also a prominent public speaker on issues of women’s rights and African American freedom during and after the American Civil War,” noted John Jordan, director and co-founder of the Dickens Project. “Her fourth novel, Iola Leroy, was published in 1892. Like many African American intellectuals of this period, Harper admired the novels of Dickens and saw him as a champion for disenfranchised and outcast members of society.”

“Like David Copperfield, Iola Leroy tells the story of a young person’s coming of age and struggle to survive during a time of social conflict and national unrest,” Jordan added. “Although they differ in many respects, both books are, in a sense, historical novels that trace the course of an individual life against a backdrop of social change and transformation.”

Jordan noted than an important evolution within the larger field of Victorian Studies in recent years has been its globalization and, in particular, its sharper focus on 19th.-century transatlantic relations, especially with respect to issues of slavery and its legacy in both Britain and North America.

“As part of this development, the Dickens Project had already begun to examine issues of race and race-centered pedagogy in sessions at our 2018 and 2019 summer conferences,” said Jordan. “The decision to pair Copperfield with an African American text was in this sense an extension of work already undertaken collectively by the Project faculty.”

He added that two other factors give the Virtual Dickens Universe of 2020 a special relevance and urgency.

“The first is the growing prominence of the Black Lives Matter movement over the past few months in the wake of the murder of George Floyd and the subsequent widespread protests calling for an end to racial injustice in this country.  Among other things, the Virtual Universe will address the relevance of Critical Race Studies for students and scholars of Victorian literature, and of the humanities more generally, and will include a panel on practical strategies of anti-racist pedagogy in the classroom,” said Jordan

“A second development is the publication earlier this month, in the Los Angeles Review of Books, of an important essay by three young scholars, all women of color, challenging the field of Victorian Studies to re-examine the racial assumptions underlying its self-definition as a discipline and calling on its members to devote more attention to issues of race—not only in texts by writers of color but also in all areas of Victorian literature and culture. Two of the authors of this major intervention (Ronjaunee Chatterjee and Alicia Mireles Christoff) will be among the participants in the Virtual Dickens Universe.”

And while there won’t be any Victorian teas, small group seminars or Victorian dancing this year (at least not in person), there will be a special event to culminate the Virtual Universe.

On Friday, July 31, high school students from South Los Angeles, who spent a large part of the 2019 school year studying David Copperfield and translating it into theatre, will present a dramatic online performance reflecting how their own lives relate to the novel. A Q&A session will follow the production.

The Virtual Dickens Universe takes place online the week of July 26-31. Admission is free and open to the public via Zoom. Registration is required. The Dickens Project is also sponsoring a year-long series of short videos under the title “Dickens-to-Go.”  For more information about the Virtual Dickens Universe and other activities, visit the Dickens Project web site.