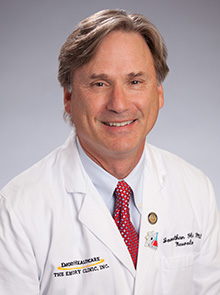 An experimental gene-silencing drug designed for a rare, inherited form of amyotrophic lateral sclerosis (ALS) has shown promise in a clinical trial conducted at the Emory ALS Center and other medical centers around the world.

The trial indicated that the “antisense” drug, known as tofersen, lowers levels of a disease-causing protein in people with a type of ALS caused by mutations in the gene SOD1. The results of the study, published in New England Journal of Medicine, have led to the launch of a phase 3 clinical trial to further evaluate the safety and efficacy of tofersen.

Although the study was primarily meant to evaluate safety and whether the drug lowers levels of the target protein, there are preliminary signs that high doses of tofersen slowed clinical progression of ALS.

Jonathan Glass, MD, director of Emory ALS Center, noted that a small number of patients (four) on the highest dose of the drug showed no progression of their disease over the 12 weeks of the study. A total of 50 people participated in the study, receiving a range of doses of the drug.

“This is a universally progressive disease, and it was unlikely for that to happen by chance,” says Glass, who is also professor of neurology and pathology and laboratory medicine at Emory University School of Medicine.

While this particular drug is aimed at only a small percentage of people with ALS, the approach of blocking the production of specific proteins may help people with other forms of the illness. The use of anti-sense technology has already shown groundbreaking positive effects in another fatal motor neuron disease, SMA (spinal muscular atrophy). The study was sponsored by the pharmaceutical company Biogen Inc.

About 20,000 people in the United States are living with ALS. The disease kills the nerve cells that control walking, eating and breathing. Few people survive more than five years after diagnosis, and existing treatments are only modestly effective at slowing the pace of the disease.

About 10 percent of ALS cases are inherited, and one-fifth of those are caused by mutations in SOD1. Such mutations cause the SOD1 protein to become “toxic”, so reducing protein levels might help ALS patients with one of these specific mutations.

The study provided evidence that the drug lowered SOD1 protein levels in the cerebrospinal fluid that surrounds the brain and spinal cord. Protein concentrations dropped by an average of 2 percent in the low-dose group and 33 percent in the high-dose group.

Tofersen is an antisense oligonucleotide, which is a DNA-based molecule that interferes with the genetic instructions for building proteins. The molecule is designed to block production of the SOD1 protein.

If tofersen proves effective in the phase 3 trial at treating SOD1 ALS, it would directly benefit only a small fraction of ALS patients. But this approach could pave the way for other experimental oligonucleotide-based drugs, researchers say.

Most of the adverse events patients experienced were linked to the drug being administered via lumbar puncture, a standard procedure in neurology. Five patients who received tofersen and two who received placebo experienced serious adverse events, including two deaths in the tofersen group and one in the placebo group, all of which were due to the natural progression of disease.

More information about the ongoing study is available here and here.

About the Emory ALS Center

The Emory ALS Center is part of the Emory Brain Health Center. Led by Dr. Jonathan Glass, it is one of the largest clinical centers for ALS in the United States. It is recognized nationally as a Treatment Center of Excellence by the ALS Association and is designated a Certified ALS Center by the Muscular Dystrophy Association. The Center’s approach to ALS care and research bridges numerous disciplines and departments and is comprised of a multi-disciplinary team of physicians, nurses, therapists, social workers, basic and clinical research scientists, students, fellows and volunteers.