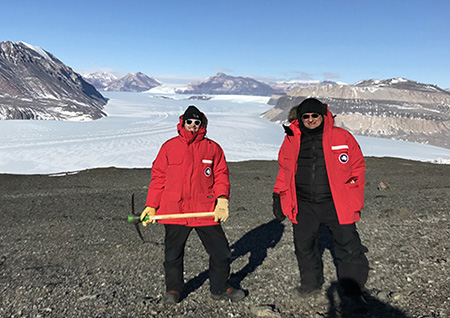 At the end of Taylor Glacier, a hypersaline brine known as “Blood Falls” flows onto the surface. The red color is from iron oxide precipitating from the subglacial waters. Researchers studied mineral deposits formed in the past from such fluids and found evidence of glacial retreat. (Photo by Terry Blackburn)

A subglacial precipitate from from the Pensacola basin that formed 200,000 years ago. Combined with data from other samples, the age and uranium isotopic composition of this sample suggests that parts of the East Antarctic ice sheet were deglaciated during a warm interglacial period about 400,000 years ago. (Photo by Michael Scudder)

A subglacial precipitate from from the Wilkes Basin. Geochronologic data for different layers within this sample track the evolution of the subglacial fluid over a duration of 150,000 years, indicating how long the fluid has been isolated beneath the East Antarctic Ice sheet. (Photo by Michael Scudder)

Questions about the stability of the East Antarctic Ice Sheet are a major source of uncertainty in estimates of how much sea level will rise as the Earth continues to warm. For decades, scientists thought the East Antarctic Ice Sheet had remained stable for millions of years, but recent studies have begun to cast doubt on this idea. Now, researchers at UC Santa Cruz have reported new evidence of substantial ice loss from East Antarctica during an interglacial warm period about 400,000 years ago.

The study, published July 22 in Nature, focused on the Wilkes Basin, one of several bowl-like basins at the edges of the ice sheet that are considered vulnerable to melting because the ice rests on land that is below sea level. The Wilkes Basin currently holds enough ice to raise sea level by 3 to 4 meters (10 to 13 feet).

Ice flows slowly through the basins from the interior of the continent out to the floating ice shelves at the margins. Ice loss causes the grounding line—the point at which the ice loses contact with the ground and starts floating—to shift inland, explained first author Terrence Blackburn, assistant professor of Earth and planetary sciences at UC Santa Cruz.

“Our data shows that the grounding line in the Wilkes Basin retreated 700 kilometers [435 miles] inland during one of the last really warm interglacials, when global temperatures were 1 to 2 degrees Celsius warmer than now,” Blackburn said. “That probably contributed 3 to 4 meters to global sea level rise, with Greenland and West Antarctica together contributing another 10 meters.”

In other words, a period of global warming comparable to what is expected under current scenarios for manmade greenhouse gas emissions resulted in an increase in sea level of around 13 meters (43 feet). Of course, this wouldn’t happen all at once—it takes time for that much ice to melt.

“We’ve opened the freezer door, but that block of ice is still cold and it’s not going anywhere in the short term,” Blackburn said. “To understand what will happen over longer time scales, we need to see what happened under comparable conditions in the past.”

The problem with studying the interglacial periods during the Pleistocene is that they all ended in another ice age when the ice sheet advanced again and covered up the evidence. For the new study, Blackburn and his colleagues used a novel technique based on isotope measurements in mineral deposits that record past changes in subglacial fluids.

Uranium-234 (U-234) is an isotope of uranium that accumulates very slowly in water that is in contact with rocks due to the high-energy decay of uranium-238. This happens everywhere, but in most places hydrological processes carry water away from sources of enrichment, and the U-234 gets diluted in large bodies of water. In Antarctica, however, water is trapped at the base of the ice sheet and moves very slowly as long as the ice is stable, allowing U-234 to build up to very high levels over long periods of time.

Blackburn explained that the ice sheet acts like an insulating blanket, so that heat from Earth’s interior causes melting at the base. But temperatures are colder where the ice is thinner at the margins of the ice sheet, causing subglacial water to refreeze.

“Water flowing beneath the ice starts refreezing at the edges, which concentrates all the dissolved minerals until it becomes supersaturated and the minerals precipitate out to form deposits of opal or calcite,” he said. “Those deposits trap uranium-234, so we can date the deposits and measure their composition, and we can track that through time to get a deep history of the composition of water under the ice sheet.”

What that history suggests is that the U-234 in subglacial water in the Wilkes Basin was flushed out during the interglacial period 400,000 years ago as the ice melted and the grounding line retreated. That reset the U-234 concentration to low background levels, and accumulation then restarted when the ice advanced again.

Blackburn noted that present-day evidence for the accumulation of U-234 in subglacial fluids can be found in the McMurdo Dry Valleys, the only place where Antarctic glaciers terminate on land. There, highly concentrated brines emerge from the glaciers in places such as Blood Falls, where the blood-red color comes from high iron concentrations in the brine.

“The isotopic compositions of those brines are comparable to the precipitates that we’ve dated from a range of locations, and they all share the characteristic U-234 enrichment,” Blackburn said. “The brines are what’s left when the subglacial fluids get all the way to the edge of the ice sheet.”

He said the new study was inspired by a 2016 paper in which researchers studying deep-sea corals reported evidence of a major change in ocean chemistry, including a spike in U-234, coinciding with the end of the last ice age, when the vast Laurentide Ice Sheet that covered much of North America melted.

“They speculated that it accumulates under the ice sheets and pointed to some possible sites in Antarctica where that might be happening,” Blackburn said. “I happened to be in one of those places at the time.”

So was his colleague, glaciologist Slawek Tulaczyk, a professor of Earth and planetary sciences at UC Santa Cruz. They discussed the paper and began planning this study, which eventually involved several UCSC faculty and students. The team collected some samples of mineral deposits themselves, but some of the most important samples used in the study were collected in the 1980s and archived at the Byrd Polar Rock Repository at Ohio State University.

In addition to Blackburn and Tulaczyk, the coauthors of the paper include James Zachos, professor and chair of Earth and planetary sciences, graduate students Graham Edwards and Gavin Piccione, undergraduates Michael Scudder and James Babbe, and instrument specialist Brandon Cheney, as well as Bernard Hallet at the University of Washington and Noah McLean at the University of Kansas. This work was funded by the National Science Foundation.