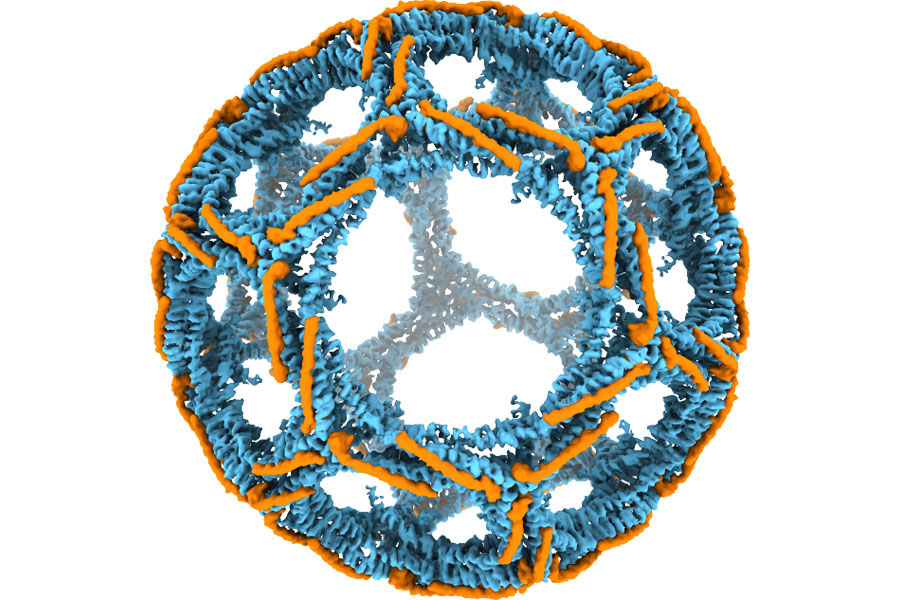 The structure of the clathrin cage that forms around a vesicle, a fluid-filled package that moves materials between compartments in cells. Florida State University researchers determined this cage structure and what determines its shape and size in a paper published in Science Advances. Courtesy of Scott Stagg

Florida State University researchers have new insight into the tiny packages that cells use to move molecules, a structure that is key to cellular metabolism, drug delivery and more.

Their research uncovered more about the proteins that form the outer structure of those cellular packages. The work was published in the journal Science Advances.

“Just like human mail carriers have to transport packages of different shapes and sizes, cells also have to transport a variety of materials to the right compartments within them,” said Scott Stagg, associate professor of chemistry and biochemistry and a study co-author. “They need to bring in molecules from outside the cell and transport them between the different cellular compartments, and they have little molecular machines called vesicles that function like postal carriers moving microscopic packages from one compartment to another.”

Scientists have previously observed cells create vesicles — fluid-filled sacks that move materials within a cell or from one cell to another. They have also observed a protein called clathrin form a cage-like arrangement that made up the outside structure of vesicles.

But there were still questions about how exactly clathrin forms those structures and what determines the shapes it can take.

Using high-powered microscopes, the FSU researchers discovered that another protein, known as an adaptor protein, ties multiple clathrin molecules together in a way that allows those structures to take on different sizes.

They also showed that the clathrin coat could make a so-called “basket” shape, and one that scientists had thought the protein could not form, showing that clathrin assembly is more complicated than previously thought.

Mohammadreza Paraan, a researcher at FSU’s Institute of Molecular Biophysics

“We learned a lot about clathrin-coated vesicles by looking at the ones that were made by cells themselves,” said Mohammadreza Paraan, a researcher at FSU’s Institute of Molecular Biophysics and the study’s lead author. “We found new structures and patterns that really surprised us.”

The researchers found that the clathrin structures that other researchers formed in a test tube were different from the ones they saw from cells.

“This shows that there are things we don’t understand about how clathrin coat assembly is regulated and progresses in cells,” Stagg said. “Our hypothesis is that the cargo that vesicles carry has a role in dictating how the coats are made and that explains why we see different structures.”

The ability for cells to form vesicles is essential. It is the main route by which molecules like hormones, proteins and viruses enter cells and move within them. If it stops working, cells can die, or disease can take hold in an organism.

Understanding cellular transport is also important because the process is often hijacked by viruses like influenza or the virus that causes COVID-19 to gain entry to the cell.

“Understanding the molecular mechanisms of clathrin-based transport is important because it is such a fundamental process,” Stagg said. “It touches on so many cellular processes. The better we understand it, the more likely it is that we can manipulate it to do things like stop virus entry, enhance drug delivery inside cells or modulate neurotransmitter levels in the brain, just to mention a few. It’s a really exciting time for clathrin research.”

This work was supported by the National Institutes of Health.