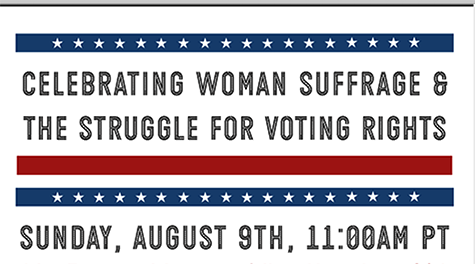 The Humanities Institute at UC Santa Cruz has teamed up with the Cabrillo Festival of Contemporary Music and Bookshop Santa Cruz to present Celebrating Woman Suffrage and the Struggle for Voting Rights—a live Zoom panel discussion followed by audience Q&A—on Sunday, August 9, at 11 am.

In anticipation of the 100th anniversary of the passage of the19th Amendment, which gave women the right to vote, and the upcoming November presidential election, it will explore the complex and controversial history of enfranchisement in the United States and its relevance to issues of equal rights today.

The panel will be followed that evening by a live online Cabrillo Festival concert featuring the orchestral world premiere of The Battle for the Ballot, beginning at 5 p.m. A commissioned work by composer Stacy Garrop, it includes narration featuring the voices of black and white women who championed the struggle in the years leading up to the 1920 victory.

“We are honoring the centenary of the winning of woman suffrage August 20, 1920, while at the same time honoring the long struggles of so many women to successfully exercise the right to vote—especially due to the systematic racist exclusion of Native American and Black women, women of Mexican heritage, and immigrant women,” said Aptheker.

The fight against voter suppression has become particularly intense in the lead up to the Presidential election in November. Judge Marla Anderson will speak on the panel about the various laws that have been passed in state legislatures since the Supreme Court decision, including requiring voter ID’s, gerrymandering, the purging of voting rolls, shrinkage in the number of polling places, shortening of hours for voting, and limits on early voting.

“All of these laws are intended to suppress the vote by Black, Latinx, Native American, and naturalized citizens,” said Aptheker. “Professor Aida Hurtado will particularly focus on the suppression of the Latinx vote, and on the ways in which citizenship and immigration intersect with voting rights. And Gail Pellerin, voter registrar in Santa Cruz county, will give factual information about voting in Santa Cruz.”

Aptheker said she will spotlight the history of how a federal amendment for woman suffrage was won, paying particular attention to the ways in which lynching and terror against Black people in the South was a particularly potent weapon to intimidate any potential advances of civil rights and voting rights following the end of Reconstruction.

“I will provide stories about the Black women who were part of the woman suffrage movement, like Ida. B. Wells-Barnett and Mary Church Terrell, specifically to counter this racial terror,” said Aptheker. I will show that woman suffrage and Black suffrage have been completely intertwined from the beginning of the struggle. And I will conclude with the heroic stories of the organizer Carrie Chapman Catt, who led the movement to victory in 1920; and the blazing courage of Mrs. Fannie Lou Hamer, a sharecropper from Mississippi who helped to found the Mississippi Freedom Democratic Party; and the passage of the 1965 Voting Rights Act that finally extended the franchise to Black women and men in the South.”

Aptheker added that she hoped that people wlll take away from the event an appreciation of the ways in which racial oppression and the denial of women’s rights have been and remain completely bound up with each other—on issues ranging from the suppression of voting rights to reproductive justice to immigration.

“We also hope the panel will inspire folks to register to vote, help others to register, guarantee mail ballots throughout the country because of the pandemic, and encourage support for all candidates with a progressive or radical social justice platform,” said Aptheker.

“This is the moment of a monumental, pro-democracy movement in our country, led in the first instance by the Black women who launched the Black Lives Matter movement, and who have been voting in huge and decisive numbers, beginning in the South Carolina primary,” she added.

The annual international Cabrillo Festival of Contemporary Music is usually held at the Santa Cruz Civic Auditorium each summer, but this year will take place online due to the pandemic from July 25 to August 9. The Voting Rights panel is part of the festival’s ongoing partnership with UCSC’s Humanities Institute (THI). This has lead to collaborative programming and festival events, such as the Ruth Bader Ginsburg tribute “My Own Words: The Law and Legacy of Ruth Bader Ginsburg” held in downtown Santa Cruz last year.

“THI is proud to be partnering with Cabrillo Festival once again,” noted managing director Irena Polic. “The panel on voting rights couldn’t be more timely, and we can’t wait for their virtual summer season to start. We’ve been impressed by the heroic efforts of the whole Cabrillo Festival team to keep the conversations and the music going, in times when we all need arts and humanities more than ever.”

“Cabrillo Festival has been grateful for THI’s partnership and support,” added executive director Ellen Primack, “Our collaborations have elevated the level of educational programming we’re able to offer Festival audiences, and has expanded community outreach for us all. The programs we’ve developed together have been successful by every measure and profoundly rewarding.”

Celebrating Woman Suffrage and the Struggle for Voting Rights, a live Zoom panel discussion followed by audience Q&A—will take place on Sunday, August 9, beginning at 11 am. Admission is free and open to the public with registration. This event is sponsored by the Cabrillo Festival of Contemporary Music, The Humanities Institute at UCSC, the Baskin Foundation UC Presidential Chair for Feminist Studies, and Bookshop Santa Cruz. For more information contact thi.ucsc.edu.