Lewis made a captivating appearance at Brandeis without even setting foot on campus. Professor Thomas Doherty recalls the event. 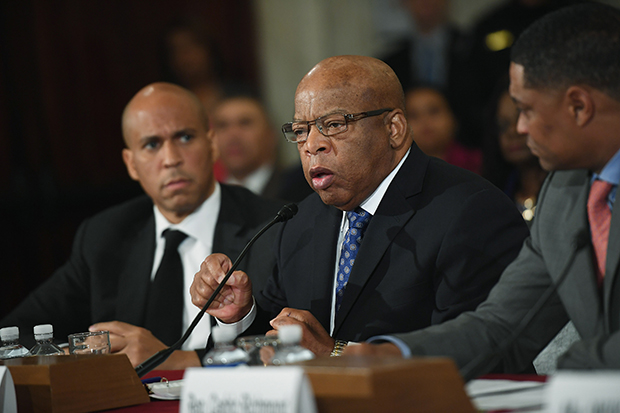 On July 17, 2020, after a six-month battle with pancreatic cancer, Congressman John Lewis passed away at age 80. The eulogies for the civil rights icon stated the obvious: that he touched lives and transformed history, that with his passing went also a tangible link to a purgatorial era in American history best not forgotten.

An extraordinary number of people have stories of John Lewis’s personal kindness and tireless commitment to the cause.

Here’s mine — of an encounter one step removed but still unforgettable.

The occasion was an academic conference at Brandeis University in 2014 on the theme “Blacks, Jews, and Social Justice in America.” Its immediate purpose was to commemorate the 50th anniversary of the deaths of James Chaney, Andrew Goodman, and Michael Schwerner, three young civil rights activists who came to Mississippi during the “freedom summer” of 1964 determined to break the chains of Jim Crow segregation. The locals called them “outside agitators.” Schwerner and Goodman were Jews; Chaney was black.

On August 4, 1964, their beaten and bullet-ridden bodies were dredged from underneath an earthen damn outside Philadelphia, Mississippi. They had been murdered by the Ku Klux Klan and local law enforcement, working together. The crime scene gave gruesome evidence of the union, even unto death, between two groups bound by a common goal. The agenda for the two-day conference was not just to celebrate the ties of the past but to chart a path forward.

The conference featured the usual line-up of scholarly papers and panel discussions, plus a few special events to break up the professorial monotony. Stanley Nelson Jr., the documentary filmmaker, screened his latest work of archival retrieval, Freedom Summer (2014). Terry Teachout, the critic and playwright, and John Douglas Thompson, the stage actor, gave a marvelous workshop on Satchmo at the Waldorf, Teachout’s play about jazz great Louis Armstrong, in which Thompson is a one man show playing two roles, the aged musician and his gruff Jewish manager, Joe Glaser.

Finally, to our delight, Congressman John Lewis agreed to deliver the keynote address, a coup finessed by Anita Hill of Brandeis’s Heller School for Social Policy and Management. Lewis would reflect on the kinship between Jewish and African American activism, giving his eyewitness account of the storied past and meditating on the more troubled present.

As ever, Lewis was a busy man, so the timing for his appearance was tight. The plan was for him to catch a late-afternoon flight from Washington D.C. to Logan Airport, where Chad Williams, chair of the African and African American Studies Department, would meet him and drive him out to the Brandeis campus in Waltham, about a 30-40 ride up the Mass Pike, god willing.  Hopefully, Lewis would have time to join some of us for dinner before addressing the conference attendees and members of the community at 8:00 p.m. — maybe 250 people in an auditorium waiting to hear from the man who, like Walt Whitman, could say, “I was the man, I suffered, I was there.”

This being the age of cell phones and text messages, the positioning of the parties in question was being tracked with mathematical precision. There was little margin for error.

Initially, things looked good: Congressman Lewis was on the plane on the tarmac in D.C. But then there was a “slight delay” due to rain and winds. In that drip-drip-drip-by-increments way that the airlines have of delivering bad news, the flight departure time kept getting pushed back — first by 30 minutes, then an hour, then 90 minutes. It appeared there would be no dinner for the congressman and soon no on-time arrival for the keynote. We made a series of announcements to the expectant crowd that Congressman Lewis might be a little late, then more than a little late, then really late. Everyone was astonishingly polite and understanding.

Then came word that all flights out of D.C. were being grounded due to weather. The congressman would not be speaking at Brandeis that night.

But Lewis had an idea. If we could work things out at our end, he could rush back to his office on Capitol Hill and Skype in his appearance.  Brandeis’s president at the time, Fred Lawrence, got on the phone and corralled tech wizard John Pizza, who bolted in to campus and conjured up the necessary audio-visual-computer connections. The big screen in the auditorium was lowered, the Skype ring tone rang, and, miraculously, the familiar face materialized. Lewis was sitting at his desk, the picture of serenity, surrounded by a family album of historic photographs on the back wall.

Lewis apologized for not being able to be at Brandeis in person because this event, and this alliance, was something he fervently wanted to acknowledge. He then walked in memory over the geography of the Jim Crow battle sites — Nashville and Selma, Oxford and Montgomery.

Assured and conversational, alternately earnest and self-effacing, he was mesmerizing. Of Goodman, Schwerner, and Chaney, Lewis reminded us that “these three young men didn’t die in Vietnam, or Eastern Europe, or the Middle East, they died right here in our country trying to help people of color participate in the democratic process.” The faith he had in America, he emphasized, came from a deeply spiritual place.

“Judaism teaches that mankind has a responsibility to repair and heal the world,” he said. “Christianity teaches that we are all a human family with the spark of the divine.” That spark needed constant attention to keep from flickering out. “We have made a lot of changes,” he concluded, “but we are not there yet.”

During the question period, with understandable pride, Susannah Hershel, professor of Jewish Studies at Dartmouth College, reminded Lewis that her father, Rabbi Abraham Joshua Hershel, had walked with the Rev. Martin Luther King and him in the Selma to Montgomery March.

There is a famous picture of the event showing a phalanx of religious leaders — Catholic nun, Baptist minister, Jewish rabbi–locked arm in arm with MLK and Lewis, striding down the road in ecumenical solidarity. Elated, Lewis jumped up, moved out of frame, and came back into view with a framed photograph taken down from a wall in another part of his office. He held the picture up to the webcam and identified the principles in the line-up.

At sign off, the audience rose as one and applauded; many had tears in their eyes. The fact that Lewis had appeared on a big screen somehow suited his larger than life stature, while at the same time the make-do nature of the link-up gave the presentation a warm intimacy. Not least, Lewis had hustled to make the connection happen.

It was an apt demonstration of the impact John Lewis made his entire life — and, at Brandeis that evening, without even setting foot on campus.

Thomas Doherty is a professor of American studies at Brandeis.