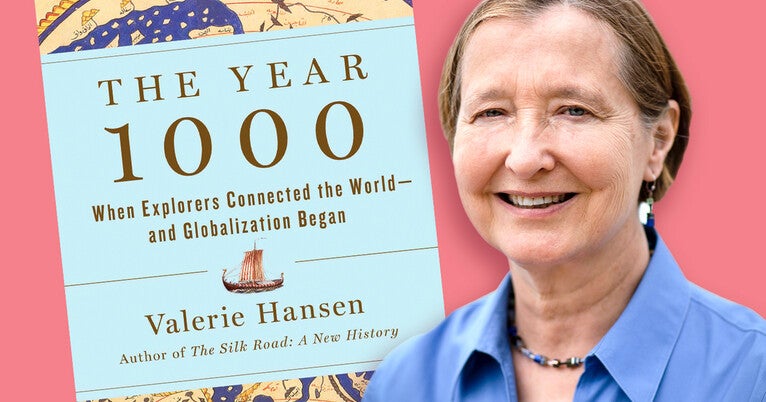 Nearly 500 years before Christopher Columbus set sail for the Americas, much of the world was already connected via trade, exploration, and cultural exchange. In fact, one can trace globalization all the way back to the 11th century, according to Yale’s Valerie Hansen, the Stanley Woodward Professor of History in the Faculty of Arts & Sciences.

In her recent book, “The Year 1000: When Explorers Connected the World — and Globalization Began” (Scribner), Hansen rejects the popular view that globalization started around the time of Columbus’ voyage, and instead demonstrates that earlier travelers had already established a network of trade routes that connected Asia, Europe, Africa, and what is now the Middle East. When the Vikings sailed to Canada, also in the year 1000, North America also became part of this “worldwide network of pathways,” she said.

“As peoples living in different regions established contact with each other around the year 1000, they set the stage for the next phase of globalization in the 1500s, when the Europeans reshaped existing networks to suit their own interests,” Hansen writes. “But the Europeans didn’t invent globalization. They changed and augmented what was already there.”

Hansen recently spoke about “The Year 1000” with YaleNews. Interview condensed and edited.

As a scholar of medieval China, what led you to tackle the subject of globalization in its early form?

My previous book was about the Silk Road [an ancient trade network that connected China with lands to the West], and it ended just around the year 1000. When I was finishing that book, I noticed that several major events occurred at the same time, all near the year 1000. One was that an oasis in the far west of modern China, which had been Buddhist, fell to a conquering Islamic army. And a different dynasty to the north invaded China. I also knew the Vikings landed in Canada in the year 1000. I wondered if these three events had anything to do with each other. The answer is yes — they are all tied up with these changes that were taking place around the year 1000. That’s how I started.

Of course, it depended on where you lived. If you were in the Chinese port of Quanzhou, you lived in a thriving city of nearly 1 million people. The city had a mosque for the resident foreign traders from the Middle East and multiple Hindu temples for those from India. Its markets offered a wide variety of goods, many imported from Southeast Asia and points beyond, which included fragrant woods, perfumes, spices, and resins, such as frankincense and myrrh.

If you lived in one of the two Viking settlements in Greenland, life was much simpler. You tended herds, farmed in the short summer season, and hunted wildlife. You might journey to Scandinavia to obtain supplies such as flour and salt or to Canada to obtain wood.

For all the differences… people in the year 1000 reacted to new situations just as we do today. They had to assess risks and react appropriately.

Wherever you lived, you had none of the technologies we take for granted these days; there was no electricity, steam power, or vaccinations. But for all the differences from the modern world, people in the year 1000 reacted to new situations just as we do today. They had to assess the risks and react appropriately. We can learn from their experiences when encountering the new because they were humans just like us.

How do you define “globalization”?

The key point is that workers produce for distant markets over which they have no control. An example from 1000 would be the people of Southeast Asia producing fragrant woods, spices, and resins that the Chinese imported in vast quantities. In other parts of the world, to a lesser extent, people were similarly producing goods for distant markets.

The difference from today is the degree. My book is about the beginnings of globalization, how it started — not its full flowering. One of the classic definitions of globalization is space/time compression; you can get on an airplane and fly across a great distance and be there in a very short time. That was not happening, obviously, in the year 1000. Travel was slow and arduous. But for the first time on a worldwide basis, people were encountering neighbors in different regions, and they were importing goods from foreign lands, some located thousands of miles away.

In general, we don’t learn in history classes that the year 1000 is a time of great exploration. Why is that?

I think most Americans don’t really think about history before 1492 very much at all. If we just focus on Europe, even the advanced places like western Europe, you would still in the year 1000 only see very small cities — nothing like Baghdad or major Chinese cities. The people doing the exploring in the year 1000 were from Scandinavia, the Malay Peninsula, Polynesia, and China, all places Americans don’t learn much about in school.

Also, archaeology has improved a lot, so some of the connections I’m writing about we now know about because of archaeological or technological breakthroughs. LiDAR, for example, is a remote sensing technology that eliminates vegetation, producing unusually precise maps of the actual shape and contours of the ground — including the remains of walls and temples, which are normally obscured by the dense tropical forest. We have learned much more about sites like Angkor Wat [an 8th-14th-century Hindu temple complex in Cambodia] because of LiDAR.

You mention in your book that blonde-haired prisoners are depicted in Mayan paintings and consider whether that suggests the presence of Norse people in Mexico in the 11th century. Did the Vikings travel that far?

It is not certain. In the fall of 2019 I taught a course called “Circa 1000” with Anders Winroth. We asked the students whether events occurring in the past were certain, possible, plausible, or impossible. Depictions of possible Vikings in the Mayan murals suggest that Viking voyages to Mexico were somewhere between possible and plausible. We have other information about people being blown across oceans. They haven’t found any Viking artifacts in Chichén Itzá [the archaeological site of a former Mayan city] yet, but if they did then we would be looking at those murals and saying, “Oh, Viking travel to Mexico is looking a little more plausible.”

Were you surprised by the extent of the slave trade in the year 1000?

Yes, I was definitely surprised to learn that the total number of slaves who crossed the Sahara between 650 and 1600 rivaled the number of slaves crossing the Atlantic between 1500 and 1850. In the year 1000, many slaves were transported from their homes in northern and eastern Europe to the Islamic world. There was a Christian doctor in Baghdad who wrote a slave-buying manual. He lists about 20 places in Afro-Eurasia that slaves come from.

In a world where many of the commodities were natural resources, slaves were a common commodity. The Vikings were trading their own people: They sometimes sold other Norsemen to the highest bidder. So we have that kind of slavery and we have the kind where people were capturing people who were not their countrymen and transporting them. Everywhere in the world that we know about, there were slaves.

How did religion contribute to globalization in this time period?

The main link between religion and globalization is that when rulers converted to Christianity, Islam, Hinduism, or Buddhism, their subjects who never left home also converted, too. We can see that with many rulers in multiple places. Originally they worshipped an indigenous religion with multiple deities. After they unified some new territory, they thought to themselves, “Oh, it would be better to have a religion that would allow me to ally with my powerful neighbors. If I have a religion with just one god, my rule can’t be challenged as easily.” We see a lot of conversions happening right around the year 1000.

Did the literature of the time reflect this early globalization?

“The Tale of Genji” is a famous Japanese novel written by a woman, probably around 1010. “Genji” has this story that I love about an incense-making party. Prince Genji and his family are celebrating the birthday of one of his daughters, and they have a competition to make the best fragrance. They make perfume by mixing fragrant woods. The Japanese probably got the supplies from the Chinese, and the Chinese probably got them from the Islamic world. I was very happy when I learned that.

When we think of globalization today, we see that there are winners and losers. Was that true in the year 1000 as well?

Absolutely, and we have protests against globalization back then. There’s one in Cairo in 995. There’s one a little bit later in the 1180s in Constantinople [modern Istanbul]. These protests both targeted expatriate Italian merchants, who displayed their wealth so conspicuously that they angered the locals.

Is globalization mainly a positive development?

I have to say that recent events have made me less optimistic about globalization than I was when I wrote the book. The downside of globalization is obvious during the COVID-19 shutdown, but the positive aspects were clearer in 1000. People caught a glimpse of new objects, which they desired, and they were able to obtain them. In this sense then, much of globalization’s beginnings were positive, but not for the millions of slaves who were removed from their homelands or for those forced to labor in onerous conditions to produce goods for export.