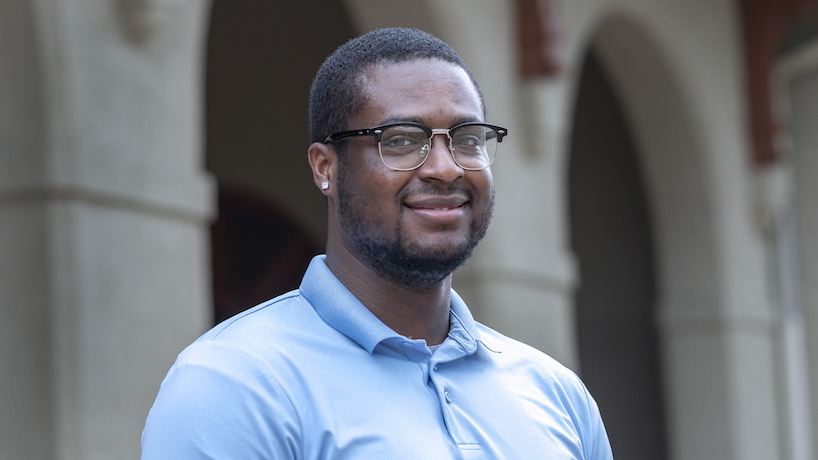 An interest in architecture and construction led alumnus Jeffry Faulkner to the UMSL/WUSTL Joint Undergraduate Engineering Program where he studied civil engineering. After graduating in May, he started a job at Parsons as a associate roadway engineer in June. (Photo by August Jennewein)

More than any other type of building, stadiums caught Jeffry Faulkner’s eye.

The University of Missouri–St. Louis alumnus first started appreciating architecture and construction on family road trips that took him across the United States to experience new things.

“When you’re in the state that you grew up in, you don’t really know what else is out there, how people live in other places and other cultures until you actually get to see it,” Faulkner said. “On those trips, I would see different types of buildings, architecture and engineering work.”

His father, an ardent sports fan, took the family to stadiums as they traveled. When Faulkner was 12, they went on an East Coast trip to Philadelphia, Pittsburgh, Washington D.C., Baltimore and New York, where Faulkner saw MetLife Stadium, home of the New York Giants and Jets.

“’That’s really cool,’” he recalled thinking. “‘I want to know how they built something that big.’ I wanted to work on a project like that.”

That goal brought Faulkner to engineering. He took a big step toward that dream when he graduated with a BS in civil engineering from the UMSL/Washington University in St. Louis Joint Undergraduate Engineering Program in May with a job as an associate roadway engineer at Parsons Corporation.

Faulkner’s journey to this achievement has not been easy. The first person in his family to pursue a STEM career, he’s made his way through a notoriously difficult program thanks to a combination of gritty perseverance and mentorship. Now on the other side, he hopes to one day inspire others like himself.

A resident of North County, Faulkner attended North Technical High School, where he specialized in geotechnical engineering. When it came time to pick a college, he and his mother discovered the joint engineering program. The school’s location, which meant Faulkner could live at home, and receiving a Multicultural Student Services Scholarship and an Access Missouri Award made UMSL a good fit financially.

Despite an intrinsic gift for math, Faulkner found the workload and demanding classes in college a rough transition from high school.

“I did some heavy soul searching, honestly,” Faulkner said. “Trying to figure out what I needed to do. Looking in the mirror, saying, ‘This is where you want to go, and you have to make some sacrifices to get to that point because what you’re doing right now obviously isn’t working.’ I had to try and do something different.”

Faulkner changed his study habits, devoted more time to schoolwork and drew on the support from his mother and his family. 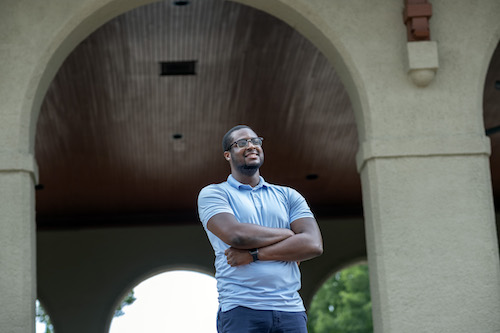 Though Jeffry Faulkner developed an interest in transportation in school, it was the aesthetics of buildings that initially drew him to engineering.

The change wasn’t as simple as just more work or different study techniques, though. Part of being successful in school meant wrestling with the disparate resources available to him versus other students.

“I was underprepared,” he said. “I had to work twice as hard as people who had been more prepared or had more resources. I also had to stop comparing myself to other people.

“During engineering school, I felt a lot of imposter syndrome, which is when you feel like you don’t belong or you’re not good enough for something. I dealt with that a lot my earlier years and, about my fourth year, I was able to move past that.”

Faulkner had help through that journey thanks to mentorship from Associate Director of Student Involvement Ashlee Roberts.

Roberts let Faulkner know she was always in his corner, available to talk or give straightforward advice. Whenever he needed to, he’d make his way to her office to take a break or get help with school.

“Jeff and I had standing biweekly meetings for at least two years,” Roberts said. “I always tell my students it is a privilege for me to be granted access to their lives. He trusted that I had his best interest at heart and believed in his dream to be an engineer. He has a quiet resolve to achieve his goals and stayed the course even when it looked shaky. I’m really proud of him. Jeff is one of the many excellent examples of the tenacity Tritons possess.”

The two met through the Associated Black Collegians, for which Roberts was the advisor. Faulkner stayed involved with the organization through his time at UMSL. He also worked at the UMSL Recreation and Wellness Center where he was on the leadership team.

Through those experiences he gained professional development skills such as networking and people skills, which he hopes will help him long term in his career goals.

He’d like to one day be a manager but, in the meantime, hopes to learn more about construction. That and the aesthetics of buildings were what drew him to civil engineering specifically.

Several internships throughout school reinforced that decision, but the most influential was a position as a project management intern with Jacobs Engineering Group, where Faulkner spent his summers from 2015 to 2017.

“It helped me understand how engineers build cities and new communities,” he said. “You can enhance a community or a city, and 50 years from now, the things that you built will still be around, and your kids or family can see what you were a part of.”

Through that internship, Faulkner learned how engineering projects worked and contributed as the company did construction for a new BJC HealthCare hospital. One aspect of the project he was responsible for was transportation robots that move trash and laundry that the hospital now uses.

That experience, combined with two transportation classes – Faulkner’s favorites in school – led to him applying for the Parsons position.

Since he just started his job on June 1, Faulkner is adjusting to life as a full-time employee while he trains for the role, but he has some ambitious long-term goals and would eventually like to be a project manager and maybe own his own company. But even more than that, he’d like to give back and inspire those with stories similar to his own.

“I to be a role model for people like me,” he said. “An example that shows that no matter your resources, you can achieve stuff if you really believe you can. Because my college track record ­– it isn’t that perfect as far as academics goes – but I kept trying and telling myself to finish this out and finish yourself. And I did.”