Alumni Lindsay Sullivan and Dustin Prescott and current graduate student Aaron Fleming and Dustin Prescott took a product innovation course together in 2017. Sullivan and Fleming were studying in the Joint Department of Biomedical Engineering at NC State and UNC-Chapel Hill, and Prescott was earning his MBA. The multi-disciplinary course introduced them to LifeNabled, a company that provides prosthetics and orthotics to amputees in developing nations.

Five percent of above-the-knee amputees worldwide have access to prosthetics. Traditional prosthetics need to be custom molded for each individual, a process that takes hours and can require thousands of dollars. Learning about LifeNabled’s work inspired Sullivan, Fleming and Prescott to create a new type of prosthetic, one that can be easily adjusted for an above-the-knee amputee.

The three founded OpenGait to take their ideas to the next level.

“One of the reasons I got into biomedical engineering was to solve problems and improve technology to improve quality of life,” Sullivan said. “You can have a direct impact.”

The team identified three key locations on limbs that can withstand the pressure of using a prosthetic and then developed a socket system that can adjust on three axes. That adjustability streamlines the process for amputees, removing the need for custom molding and making it easier to fit a prosthetic.

In 2019, OpenGait joined LifeNabled in Guatemala, making traditional sockets and testing their socket prototype on two amputees. Using the amputees’ feedback, OpenGait is continuing to develop a prosthetic that can be worn for an extended period of time.

One of the reasons I got into biomedical engineering was to solve problems and improve technology to improve quality of life.

While in Guatemala, Fleming recognized challenges that amputees face around the world. He spent years in West Africa before starting his graduate program and witnessed barriers to mobility.

“In Senegal, people walked everywhere,” he said. “It was so much more common for people to be walking or using a bike, something where you are the one powering it. Amputation can drastically affect one’s ability to get around.” 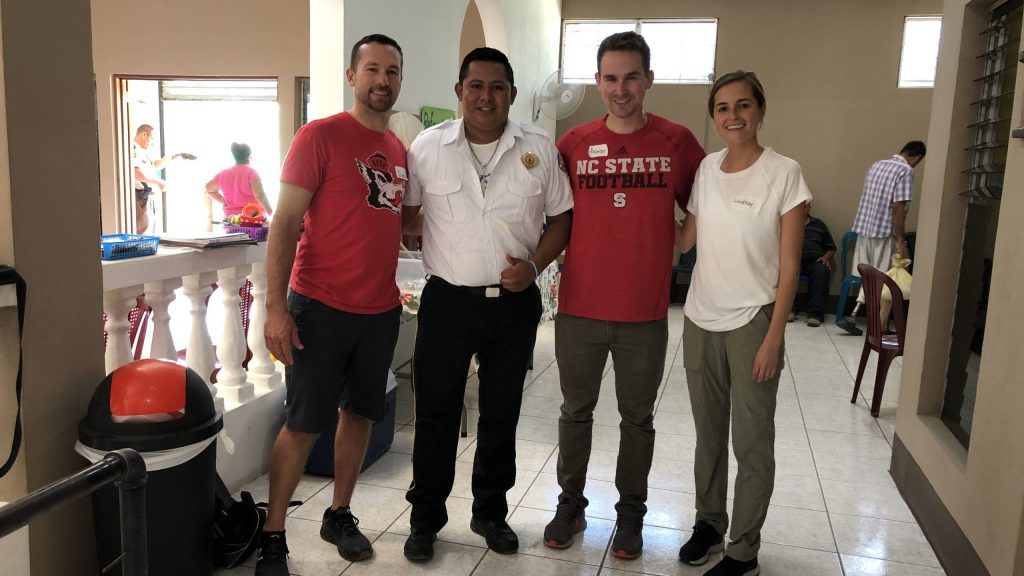 The OpenGait team stands with an above-the-knee amputee in a Guatemalan workshop.

In 2019, OpenGait was selected for NC State’s I-Corps, a National Science Foundation program that offers researchers entrepreneurial training, funding and support. At NC State’s 2019 Lulu eGames, OpenGait won first place for new venture and for social and environmental impact in addition to second place in design and prototype and audience choice.

While finessing its socket system, OpenGait is also developing a prosthetic kit that will include everything needed to fit an above-the-knee amputee with a prosthetic. It would give amputees access to prosthetics even if they don’t live near a medical facility with prosthetic services.

“We would hope to remove those barriers,” Sullivan said. “You could give a kit to someone in the middle of nowhere.”

Sullivan received her doctorate in biomedical engineering in May, and Fleming is in his fourth year of the program. The OpenGait team hopes to have a final prototype of the socket system within two years. Then, the goal is to help organizations reach more amputees.

We would hope to remove those barriers. You could give a kit to someone in the middle of nowhere.

“We would love to increase the number of amputees these organizations can see and reduce the time it takes to produce a device,” Fleming said. “Then we want to work with larger organizations who maybe can’t do much more than providing a crutch or a wheelchair.”

“We get to meet a need that’s very real,” he said.