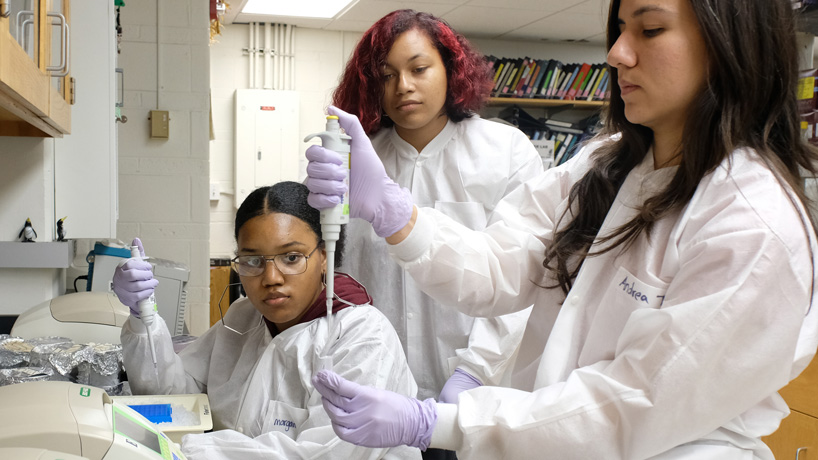 UMSL’s Collaborative Laboratory Internships and Mentoring Blueprint, also known as CLIMB, has been providing high-ability but low-opportunity students such as Morgan Stith (at left) and Dakota Warren (center) hands-on lab experience each summer since 2015. But the program has had to adapt its format this year because of the COVID-19 and precautions that prevented students from being on campus this summer. (Photo by August Jennewein)

Patricia Parker was doing her best to absorb all the numbers flashing across her computer screen about disparities in income, access to health insurance, the ability to work remotely during the COVID-19 pandemic.

The gaps between Black and white Americans might have been exactly as suspected for Parker, the E. Desmond Lee Endowed Professor in Zoological Studies at the University of Missouri–St. Louis. But it was alarming see them all packaged together the way they were in the PowerPoint slides displayed in front of her.

“This picture basically breaks down why African Americans are dying at a higher rate,” Jennings Senior High School student Kaylee Green said while describing one of those slides during a Zoom conference late last month. “Because of the differences in social position based on income, wealth, education and occupation – and also race and ethnicity – it causes disparities in exposure to influenza viruses, especially for people working menial jobs. Then there are disparities in susceptibility to contracting influenza diseases – susceptibility meaning they’re more likely to get the disease because of underlying conditions. There also are disparities in treatment once disease has developed. They could get health care, but they can’t really afford it because of their income.

“All of these additives effects of multiple disparities are what causes unequal levels of illness and death.”

Green is one of 14 high school students taking part in UMSL’s Collaborative Laboratory Internships and Mentoring Blueprint, also known as CLIMB. As she wrapped up her comments, Parker gave others logged on a chance to ask questions before sharing her own takeaways.

“I feel a strong need to find something positive,” Parker said. “You guys are doing a good job, and I can tell that this is going to be very powerful. But what can we do right now? Who can we talk to and what should we do to act? Is there some statement of what is needed to change that story?”

That’s a question that has confounded even the most seasoned policy makers, much less the high school students taking part in CLIMB. But program is designed to encourage that type of rigorous thought.

Parker started CLIMB in 2015 as a collaborative effort between the UMSL and the Jennings School District to reduce the opportunity gap facing students in disadvantaged underfunded districts. UMSL created a paid summer internship program for high-ability but low-opportunity students from Jennings Senior High, and they spent six weeks – 40 hours per week – working in research groups and getting hands-on lab experience in chemistry, biology, physics, psychology, education, mathematics and computer science.

The program has also provided assistance with career development, from filling out college and scholarship applications and how to think about college financing to learning presentation skills. Each intern receives $12 per hour for their time in the program.

Taviah Crume, Dakota Warren and Kaylee Green are three of the 14 high school students who’ve been taking part in the CLIMB program this summer. The students have been researching COVID-19 pandemic and the reasons for its outsized impact on the African American community. (Screenshots of Crume and Green captured on Zoom; Warren photo by August Jennewein)

This summer, CLIMB was expanded to include students from University City as well as Jennings, but the COVID-19 pandemic prevented it from operating as in previous years because of restricted access to campus buildings with all courses this summer occurring online.

Instead, in a scaled-down summer experience, the students – all African Americans – have been tasked with researching and preparing a presentation on COVID-19 and the reasons it has landed hardest on African Americans and other communities of color. They are set to present the final product during a Zoom meeting on Friday.

The students have been working a few hours each week on the project – not a full 40-hour week – while many of them also balance work at other jobs. They’ve been divided into four groups – two to four students per group – and have had to engage with each other via Zoom conferences.

But they’ve been learning how to do research and look for information from reliable sources as they explore four interrelated topics. One group has been working to provide an overview of COVID-19. Another has been comparing its impact to previous pandemics such as H1N1, HIV and the Spanish Flu.

It’s had an impact on how they’ve thought about the pandemic.

“I think for everyone it’s made us question everything a little bit more and try to take things more seriously,” recent Jennings graduate Dakota Warren said. “Maybe if the U.S. first took measures when they heard about the virus in China, then we could have prevented some of this already. But a lot of us didn’t really believe the virus would be able to touch us or get over to the U.S. to spread so quickly.”

Two more groups have been focused more specifically on trying to understand why COVID-19 has had an outsized impact on the African American community. One has been considering health factors that have made them more susceptible to the most serious effects of the disease. The other has examined socioeconomic factors underlying the disparities.

“It’s so challenging,” Parker said. “But I think these are the conversations that we need to have. We have to confront this stuff.”

The exercise has helped teach students the power of research to do exactly that.

“When the virus first came out, I avoided it, and sometimes when I feel like things become overbearing, I ignore it, I leave it alone,” said Taviah Crume, a Jennings senior. “But now, every time I have a question that I don’t know the answer to, I know to research it or try to find some information that I know is true so that I feel better so that I can help others feel better or at least give somebody a narrative so that they can understand better.”

To hear that makes Parker certain this experience has been worthwhile.

The students actually were surprised, once shelter-in-place orders were instituted in March and continued through April, that the program wasn’t simply canceled as many other internship programs have been.

“Dr. Parker ended up emailing us and said that no matter what they wanted to try to do the program,” said Warren, who is in her second year as a CLIMB intern and is set to enroll at UMSL this fall. “Normally, especially for us, we find that adults don’t always try sometimes. When they see, ‘Oh, it might not work out,’ they say, ‘Let’s just try again next year.”

Of course, others weren’t at all stunned to see Parker plow forward with a different plan.

“Having known Patty for a long time, she is so committed to these students and so committed to this program and its continued success,” said Lon Chubiz, an assistant professor of biology at UMSL who has helped guide one of the groups this summer after hosting an intern in his lab in previous years. “I’m not at all surprised.”

Parker grew up in Mississippi and North Carolina with a father who covered issues of civil rights for the Associated Press in the 1950s and 1960s. She remembers leaders such as Medgar Evers visiting her childhood home.

But it was the death of Michael Brown in Ferguson in 2014 – which coincidentally occurred on Parker’s birthday – and the systemic issues brought to the surface in its wake that led her to start CLIMB. 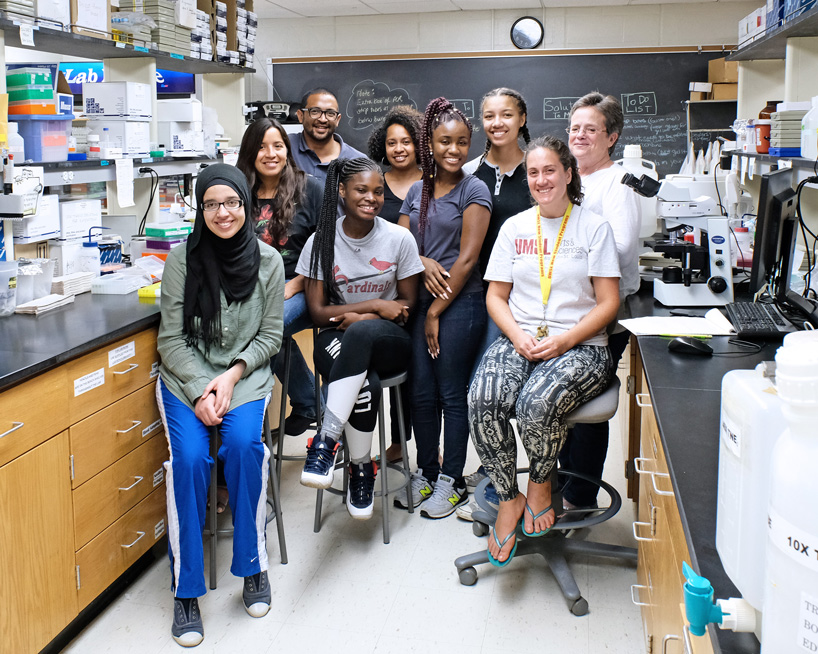 Patricia Parker (back row, far right), the E. Desmond Lee Endowed Professor of Zoological Studies, worked with partners in the Jennings School District to create the CLIMB program in 2015. (Photo by August Jennewein)

“To me, it was like being in Mississippi all over again,” Parker said. “It really was like, ‘Oh my God, we’re still here.’ It’s very, very personal to me.”

She was seeking a way she could try to combat inequality in north St. Louis County and wound up working with then-Jennings Superintendent Tiffany Anderson to build the internship program.

Anderson has since left Jennings but the program has continued to grow with collaboration from Assistant Superintendent Rhonda Key and Jennings Senior High Principal – and UMSL alumna – Miranda Ming.

A total of 60 students have participated in the program since its inception. Nineteen of the 22 students from the 2016 and 2017 cohorts have gone on to study at one of 12 colleges and universities in eight states since earning their diplomas.

“Something that I hope my interns through the years have gotten out of my lab are getting students to experience a university campus and experience what goes on at a university so that that part of going to college is demystified a bit. Then also, I hope they recognize that scientific research is an accessible thing. It’s not some group of people far away thinking about things that that you would never understand.”

Parker hasn’t given up hope of giving this year’s students some of the hands-on lab experience they were expecting when they first applied for the program last winter. She would like to make accommodations for the students to spend time on campus around their high school schedules this fall, though the pandemic they’ve spent so much time studying this summer could have the final say.

Either way, Warren, who plans to major in psychology as she begins her freshman year of college, strongly recommends the CLIMB program to future interns.

“With this internship, they really care about trying to make us learn and to fully understand and actually get something out of the internship,” Warren said. “I would definitely tell others to try it. They never know what they’re going to learn and get out of it.”