How will COVID-19 change public restrooms?

It’s certainly not the sort of thing one mentions in polite company, so forgive us for mentioning public restrooms – but COVID is changing them, and before too long, you are bound to notice.

“There’s great room for improvement,” she told correspondent Richard Schlesinger. “And in this era of COVID, it’s more and more important that we all have clean, safe restrooms to go to.”

Right now, the American Restroom Association believes there are too many surfaces to touch, and too little privacy in the privy.

“These days, with COVID you just don’t want things spreading from one place to another,” said Anthony. 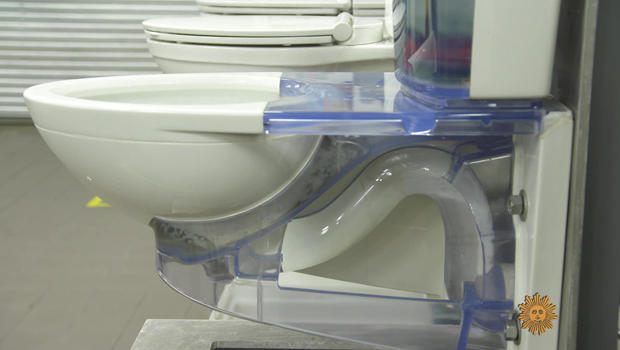 You don’t have to be Dr. Fauci to see that the current design of the American restroom, with all that open space, does very little to control the spread of COVID. Today’s bathroom stalls usually have partitions that conceal only the bare minimum. The idea of partitions that leave open space goes back at least to Frank Lloyd Wright, who championed it in designs as a way to help make public restrooms easy to clean.

Today, at Bradley International Airport in Connecticut, the new bathrooms are private and touchless, and even feature a light outside the stall to tell you if it’s being used.

“They’re known as tush lights,” said Kevin Dillon, executive director of the Connecticut Airport Authority. “So, when you do enter the stall, it will activate the system, and it will put a red light over that stall, so that someone coming into the bathroom knows that it’s occupied.” 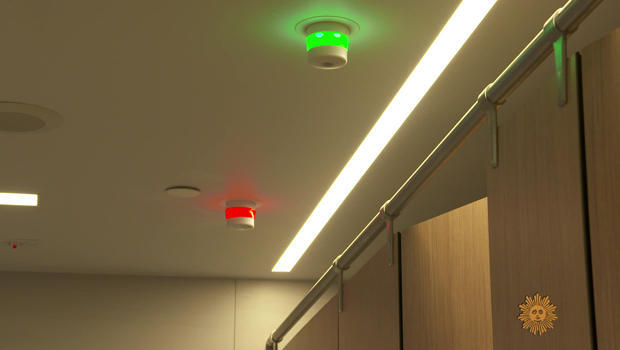 And these new bathrooms aren’t just more private; they might well be much safer.

Scientists have been studying what happens when a toilet is flushed. An animation from the journal Physics of Fluids illustrates what is called a “plume”: 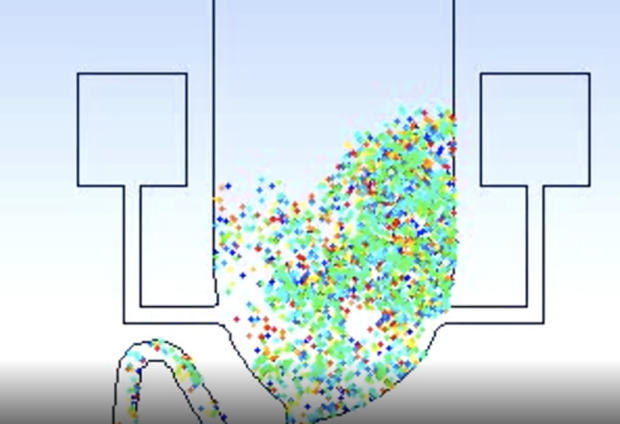 An illustration of dynamic virus particle movement during annular flushing, from a Physics of Fluids paper on virus transmission in toilets. “Massive upward particle transport is observed,” the authors note.  Physics of Fluids

“I think that you want to make sure that microbes aren’t escaping the toilet when you flush it,” said Jim Walsh, vice president of product marketing at American Standard, where they are racing to figure out how to eliminate the plume.

Schlesinger asked, “So, what do you do to combat that?”

“It’s all about the velocity, angles, and design of the toilet that’s receiving it that limits the splash,” Walsh replied.

The plume project is a work in progress, but for now, businesses are doing what they can to make restrooms safer.

A movie theatre in Southaven, Mississippi, the Desoto Cinema Grill, uses police tape to block off every other urinal so men can be socially-distanced. 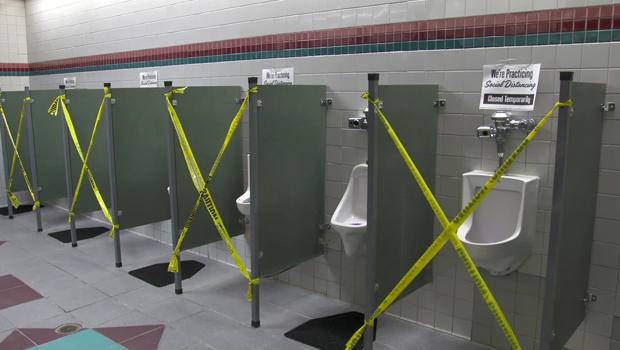 But bigger businesses need bigger plans. Jeffrey Hamilton runs the Mohegan Sun Casino in Uncasville, Connecticut. Before he could allow gamblers back in, he knew he couldn’t have people taking a chance in the restroom. “So obviously, this is our core business,” Hamilton said. “But everyone that comes here uses the bathroom.

“If you think about a bathroom, you can’t control who stands next to you. That’s out of your control. So what you do is, you prevent someone from standing next to you.”

Every other urinal is blocked off here, too, and the restrooms are cleaned frequently by attendants. They’ve also been trained to gently scold patrons who might try to leave without washing their hands.

Schlesinger asked, “How do people shame people into washing their hands?”

“Just a reminder, right? So, you’re in the bathroom, you walk out. Like, ‘Hey, don’t forget to wash your hands!'”

“It’s fun to joke about this stuff, but I gather this is something that you consider important for your business?” asked Schlesinger.

“You need to create an environment and a business where people feel safe,” Hamilton said. 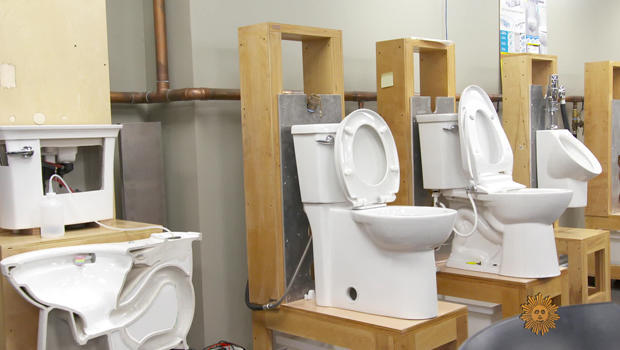 The rush to convert restrooms has been good for business at the American Standard company. They’re developing all sorts of new touchless devices, like a urinal that washes and scours itself. They’re looking at new, deeper sinks to control splashing, and they are putting antimicrobial substances in their sinks and toilets.

There is nothing simple about battling a pandemic that spreads so easily. So, it is probably inevitable that as COVID becomes a fixture of daily life, it will change the fixtures of daily life.